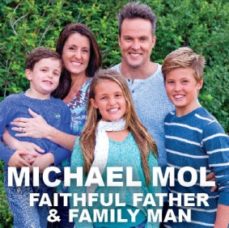 Imagine being in the public eye for most of your adult life…nearly two decades to be exact! Imagine too, being famous for your genial, considerate, friendly, accommodating nature –  great character traits to be famous for, but certainly ones that cut you no slack should you be having a bad day!
A role model
But for medical doctor, executive producer, international speaker, businessman and veteran TV personality, Michael Mol, the public platform is a privilege that he doesn’t take for granted, and is unlikely to ever bemoan. He recognises God’s hand of destiny.
Having said that, a man as busy as Michael has to prioritise, and without question, his unwavering faith in God, and commitment and love for his family, come first every time.
Family first
Married to his beautiful and talented wife Jacqui for 20 years, the couple have three children, Joshua, Rachael and Naethan, and live in the leafy surrounds of Cape Town.
Celebrating fathers
Because Michael is a household name, and a Christian role model, we felt this Father’s Day it would be appropriate to chat to Michael about the influence his dad (Dr Arnold Mol) has extended in his upbringing, the role Michael undertakes to lead his family and the impact that God the Father has in the couple’s lives.

Your dad is a well known Christian author and speaker. How has he impacted your life?
Aside from all the intricacies and challenges of parenthood, my father distilled down his role as a parent to just two goals … “I want my kids to leave home one day with a great self image, and secondly I want them to have a relationship with God that is core to who they are and what they do…”
I’ve tried to improve on that for my own kids, but quite frankly if I could “achieve” the same for Joshua, Rachael and Naethan that would be more than enough, especially when it comes to instilling a faith that gives them meaning and purpose.

What do you admire most about your dad?
My father once wrote a book on parenting. It was probably the craziest and most courageous thing he’s ever done, to assume to have insights into such a vital role amidst a minefield of good and bad advice.
I’ve never actually read it cover to cover, but then I never had to because he modelled fatherhood for me. “Who you are speaks so loudly I can’t hear what you’re saying,” said Emerson famously – and in my Dad’s case he practiced what he preached…imagine that!

What does being a father mean to you?
Becoming a father changed everything. I had the privilege of delivering my eldest son – and at that very moment, as I held him in my hands – before cutting the umbilical cord, my ambition instantly shifted from “What could I be one day?” to “What could he be one day?” I count it a real blessing to be able to nurture the lives of three little people and to love and guide them into becoming the very best that God intended them to be. Not seeing fatherhood as a privilege is where so many dad’s go wrong today – I think one of the biggest issues family’s face in society today is abdication.
We desperately need fathers who are ready and willing to take on the role of the leader in the family – who have a die hard commitment to their family – to protect, serve and nurture their children…and it starts with loving your wife unconditionally.

Jacqui, what do you appreciate about Michael as a father?
Michael wears several hats (very energetically I may add!) – but one thing that remains consistent is the authentic man who wears them. And when he walks in the door at home, he leaves all the others behind and wears only the most important one – a man completely engaged with his family.
He gives up his phone for his family, intentionally pushing aside all other “distractions” and taps into each of us right where we are at that moment. That often means making me a cappuccino and sitting still (hard for Michael I know) chatting with me, grabbing the surf boards and taking Josh out to the beach for a late afternoon surf, whisking Rachi off on the vespa with cameras in hand in search of the perfect photo, making her feel like the most prized girl in the world or maybe just snuggling next to Naethan, building lego with this cute little guy!
But where Michael exceeds all expectation, is the imaginative and creative way he rounds us all up to spend family time around the Bible. Everyone gets comfortable, Naethan may be standing on his head, Rachael perched at the keyboard, Josh scooting around on his skateboard like only a teenager can!
Michael has a way of making the words on the pages come alive by telling stories from his own experiences that illustrate the message at hand. And often the kids get to act out the stories or build pictures with objects that make the Scripture verses memorable and real.
Michael truly lives out the verse “I have no greater joy than to hear that my children walk in Truth.” 3 John 1:4.

Michael, you are a busy dad! Tell us about your exciting new venture…
Non-infectious diseases cause more deaths in South Africa, than infectious illnesses. Since most non-communicable diseases derive from unhealthy lifestyles, we need to turn our attention to the old adage “prevention is better than cure.”  It is a widely accepted fact that when an individual gets advice from a doctor, a trusted source of information, they’re more likely to change their lifestyle and behaviour than if they were advised by anyone else (Dr Google).
By connecting people to doctors, affordably, conveniently and quickly – anytime, anywhere – (our mobile app) Hello Doctor has the potential to make a significant difference in prevention of lifestyle diseases. For more info see: www.hellodoctor.com
Any sage advice for other dads?
You are replaceable. Sounds like negative advice, but it isn’t…As a doctor, as a CEO, a presenter, a speaker, a team-mate … in virtually all aspects of what I do I am replaceable, except for one… I am NOT replaceable as a father, and that makes it the most important role I will ever play in my life.
Jacqui, with a famous husband, how have you warded off marital difficulties
and kept your identity?
Michael has won my heart over and over again with the way he sees and affirms the woman in me. I know without a doubt that my value doesn’t exist in how I look or what I can accomplish, but my true beauty rests in the state of my soul and so he encourages me to keep building on my relationship with God – which is where my identity ultimately comes from. Of course as a doctor, he does care that I stay physically active and is always including me with the kids on surf outings and mountain bike rides (which I am not that brilliant at, but that’s ok).
Michael has also given me the resources and space to do lots of different courses. (I love learning!) One of those courses led me into the world of ‘StrengthsFinder’ where I get to coach people in the areas of what they are the strongest at and most talented in. This “talent coaching” has been the fuel that has kept me energised and adding value!
The most profound gift Michael has given me is that he REALLY wears his wedding ring. I’m not just referring to physically adorning his ring finger with a wedding band – I mean he talks about his wife and the sanctity of marriage everywhere he goes – he has made a bold and public commitment to stay faithful and divorce is never an option. Because of his tried and tested integrity – I know that I am safe in his hands!
Finally, Michael, how do you maintain your testimony in challenging environments?
The environment has nothing to do with it – if I didn’t reflect God in every aspect of life, from the breakfast table to the boardroom to the bike race – then I’d question the authenticity of my faith and relationship with my Heavenly Father. I’ll never forget the words of an old Indie Rock song from two decades ago that went: “He died for me, I’ll live for Him.” 