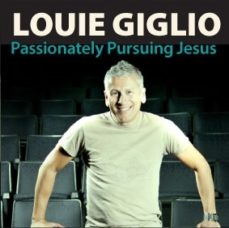 The world is irreversibly cracked. I don’t think it’s worse now than in times of old though. There are some pretty dark days recorded in history and in Scripture, but I have a hunch that every generation has thought, it can’t get much worse than this.

But we have to be hopeful and determined; we carry divine power and the Gospel message of Resurrection.His grace is extended. Heaven is open for business. The enemy is defeated and the grave is empty!”

Louie’s life vision
This is the message of hope that permeates Louie Giglio’s life. It drives the focus of his ministry and consumes his attention. It is his passion – to make known the name and person of Jesus Christ and see the climate of faith around the globe change as the next generation is inspired to passionately pursue God. And it’s a vision he shares with his wife of 26 years, Shelley, and his close friend and Christian musician, Chris Tomlin.

Discovering his calling
Growing up in a Christian home (and even being born in a Baptist hospital), Louie knew God from a young age, but it was only when he reached college that he truly committed his heart to Christ: “I sensed God calling me to aim my life toward the proclamation of Jesus and His Word. What I discovered over the next few years is that God doesn’t hand us an envelope with our lifetime assignments in it, rather He leads us step by step into His purposes for our lives.“

Passionate about students
For Louie (who as a young boy dreamed of becoming a doctor, and later a tennis player,) God had several assignments in mind – not least of which included becoming a global author and speaker. But perhaps his greatest assignment has been to inspire and mentor college students…

Giglio graduated from Georgia State University and earned a Master of Divinity from Southwestern Baptist Theological Seminary in Texas. Later he went on to pursue a Doctor of Ministry degree. After finishing seminary, Giglio and his wife Shelley began a weekly Bible study called Choice at Baylor University where he was doing graduate studies. After several years, over 10% of the student body was attending the weekly gathering.

“Early on in our marriage, Shelley and I started a campus ministry at our ­lo­cal university. Ten years later, through a serious illness and the eventual death of my dad, Shelley and I moved to Atlanta and eventually started a movement for university-aged young people called ­Passion. Ever since, we have circled the globe gathering students for His renown.”

Pursuing the presence of God
“We are committed to reaching the youth because those are the critical years when students (who were sure of the truth in their formative years) are now forging their thought patterns and relationships that will set the trajectory of their future. We want to be at the crossroads and call them to Jesus. Many are disillusioned with Church and faith, but most have never really encountered Jesus…the true Jesus. “

Since its inception in 1997, Passion has seen millions of students around the globe gather in prayer and worship. Louie feels strongly that it’s not just about hosting Christian events though. Since 2007, Passion’s ‘Do Something Now‘ initiative has powerfully wed the expression of worship with justice, as students have given over $8 million to dozens of partner organisations throughout the world.

Expanding the vision
Four years ago, out of the Passion Movement, Louie and his team including Chris Tomlin and Matt Redman, planted Passion City Church in Atlanta. Fortunately for South Africans, Passion is not limited to America, and in fact there have been several world tours – not that this was part of Louie’s initial vision. “We received an email from a student in Manila who had seen a DVD of our 2000 Passion gathering called OneDay.  He simply asked, “Do you ever think you could bring Passion to my country?” Well, for a US based outfit who wasn’t even sure how long the vision of Passion gatherings would last, that was a far-fetched request. But he was on to God’s vision before we were!”

World-wide impact
In 2006 we did our first gathering in Toronto, Canada, and in 2008 we hosted a 17-city World Tour in 16 nations (including Cape Town). Our future will always find us through the world, gathering this generation for His glory.”

South Africa in his sights
This month South Africans can look forward to seeing Louie and the Passion team preaching and worshipping in stadiums across the nation. Louie has been to the country several times, and has a fond place in his heart for us.
“Your country is a stunning place! I’d have to say we love it all, but CT is just so special, and perhaps one of the most beautiful cities in the world. Table mountain always inspires me. One thing we hope to do on this visit is see Robben Island. I want to stand in the place where such deep forgiveness was extended and a hopeful future forged.”

Louie has always been a man of faith, and these events in South Africa are sure to challenge his expectations. The team have hired out Supersport Park in Pretoria, The ICC Arena in Durban and the Cape Town Stadium – together a combined seating capacity of over 100 000 people!

He is God of our cities
Interestingly, the Passion events in South Africa are unique in that they are not limited to college students alone. Louie feels that it is time to cast the nets wider and see the whole Body of Christ come together for one purpose – the Cause of Christ. People from all ages and denominations are encouraged to participate, and even more so – to invite young students and unsaved friends and family. These events are a date with destiny and have the potential to radically impact our cities for Christ.

It’s all about Jesus
Arguably most famous for his talks and books on the magnitude of God as reflected in the universe (Indescribable and How Great is our God), Louie is refreshingly unaffected by all the hype and fame. “I am far from where I want to be, but humility is not a character trait to aspire to, rather it is the by-product of walking with God. No one who is conscious of the presence of God has room for a false sense of self.

The huge danger of ministry, like everything else in life, is that it can become an idol that gets in the way of our love of Jesus. We are not called to work for God, rather to walk with God.”

To be part of Passion, buy your tickets from Computicket or see www.268generation.com. Passion and JOY! Magazine are giving away 100 tickets to the events. Send contact details and stadium choice to julia@joymag.co.za 