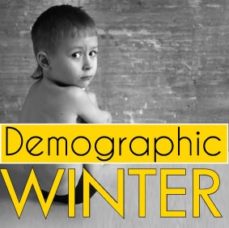 Demographic Winter is the term used to describe what many social scientists and economists agree is the most disturbing event in modern history – the decline of the human family. The shocking reality of the culture of death came into sharp focus during the World Congress of Families held in Madrid, Spain earlier this year. Almost every speaker referred to the ‘Demographic Winter’ currently gripping the Western World.

Dr Gary Becker, of the University of Chicago said, “When the stock of the working population is declining relative to those that are retired…that is going to be a major challenge which we’re not yet prepared for.” In short, the anti-Christian, anti-family ideology currently sweeping across most of Western civilisation has precipitated a culture of death that is slowly but inexorably killing off the human family.

Decline of the nuclear family
A ground breaking documentary entitled: ‘Demographic Winter – the decline of the human family’ declares, “World experts agree the effects [of a Demographic Winter] will be severe and long lasting and are already becoming manifest in much of Europe.” Birth rates are plummeting throughout the world as a result of a sustained global offensive against the natural family by radical feminist groups, homosexual activists and other anti-family lobbyists.
A radical, anti-family agenda
Plummeting birth rates are a direct consequence of the war on fatherhood, motherhood and children. Radical feminists regard motherhood and child bearing an imposition to the progress of the emancipation of women. They further regard Biblical Christianity as a major barrier to women’s ‘empowerment’. Liberal laws on abortion and the political and social advancement of the homosexual agenda have significantly contributed to the death of the natural family. The war on the family is raging at the United Nations where radical anti-family activists regard the death of the natural family as a victory for human rights.

The reason anti-family activists hate the natural family as much as they do, is because it embodies God’s Creation blueprint for human sexuality.

God’s blueprint for life
The two-parent, biological family, still presents the best environment for the child’s psychological, emotional, and physical wellbeing and is the only family structure that positively contributes to the economic success of nations. Those promoting unnatural sexual practises and alternative family structures, view the natural family as an obstacle to the legitimisation of their radical social agenda.

Essentially, the Biblical Christian worldview of the family and human sexuality represents the culture of life. God gave mankind the ability and privilege to choose a culture of life over a culture of death. “See, I have set before you today life and good, death and evil. In that I command you today to love the Lord your God, to walk in His ways, and to keep His commandments, His statutes, and His judgements, that you may live and multiply.” Deut 30:15 -16.

A consequence of the curse of disobeying God’s commands is population decline. “You shall be left few in number, whereas you were as the stars of Heaven in multitude – because you would not obey the voice of the Lord your God.” Deut 28:62. Most European nations are experiencing sharp declines.

Christianity promotes life
As a result, they face catastrophic economic collapse. Tragically, many of the curses mentioned in Deuteronomy 28 will become a reality for these nations as they turn their backs on the God that blessed them with so much success. Jesus is revealed in Scripture as “The Way, the Truth and the Life.” Those who obediently follow Him are therefore advocates of the culture of life. Jesus reveals both the source of the culture of life and the culture of death in John 10:10, “The thief does not come except to steal, and to kill, and to destroy. I have come that they may have life, and that they may have it more abundantly.”

Families are disintegrating
What many nations in the world are facing today is anything but abundant life! The thief (the devil) has stolen the joy of family life. Families in most developed countries are shrinking. A few decades ago family gatherings involved numerous members including uncles, aunts, brothers, sisters, cousins, nephews, nieces and grandparents.

The large family instilled a sense of security, belonging and well-being. Often, the greater family acts as the support structure for members who fall on hard times. However, the contemporary family in the western world often consists of just one child. Imagine if an only child marries another only child whose parents were also only children (a scenario that is becoming increasingly likely).

This means family gatherings will consist of the married couple and their parents only. No siblings, uncles, aunts, cousins, nephews or nieces. What a sad and tragic picture this paints. The disintegration of the family robs children of a childhood spent surrounded by family members. The family is God’s idea and nothing the world offers can improve on it.

A Western problem…
The radical feminist and pro-homosexual ideologies adopted by many Western governments today perfectly illustrate the culture of death mentioned in John 10:10. Feminists encourage women to forego motherhood and instead focus their attention on climbing the corporate ladder. That is why the ‘right’ to tax-payer funded abortion is such a fundamental issue.

It gives people the power to snuff out the life in the womb whenever a pregnancy inconveniences them. Radical feminists argue that motherhood, the very essence of the nurture of life, is meaningless, degrading and confining, and that childcare is an unfair burden placed upon women.

Cultural imperialism…
This godless ideology has advanced a culture of death across the Western world that may have already precipitated its cultural and economic decline. The culture of death is further advanced by the growing agenda to legitimise same-sex ‘marriage’ across the world. Western donor nations are now using financial aid as a weapon to force developing nations – especially African nations – to comply with the radical homosexual agenda.

In a documentary entitled, ‘Cultural Imperialism – the Sexual Rights Agenda’ many African representatives at the UN talk about being bullied into imposing legal abortion, legalised prostitution and special homosexual rights on their nations despite overwhelming opposition from their populations. The imposition of the culture of death on developing nations means the death of the family will not be only contained to Western nations but will eventually become a global phenomenon.

We need to restore Biblical values
Because homosexuals cannot procreate, every same-sex relationship represents the death of a small civilisation. The culture of death fuelled by the radical anti-family agenda has set mankind on a catastrophic trajectory that can only end in social and economic disaster. The only chance we have of reversing this dreadful trend is to make a choice to actively promote a culture of life. To do this, followers of Christ must aggressively fight to restore the sanctity of life in society.

As long as the crime of abortion-on-demand is considered a fundamental ‘right’, the culture of death will prevail. The family, which includes the God-given roles of fatherhood and motherhood, must be restored to its pre-eminent position in society.

Keys to a prosperous society
The Christian Church must once again take up its mandate to promote the natural family as the only social unit that positively contributes towards the lives of men, women and children and ensures a strong, stable and prosperous society. The abundant life or culture of life Jesus came to give us is contained in not only walking in intimate relationship with Him but also defending, strengthening and advancing the sacred and life giving institution He gave us – the family. 