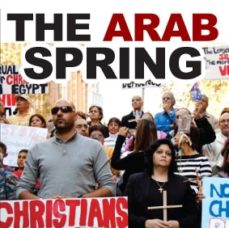 Tunisia used to be recognised as the most tolerant of all Muslim states in the Middle East. Now Egypt Today has screened graphic footage of a young Tunisian convert to Christianity being beheaded, while Islamic militants recited the Quran and chanted Islamic slogans and curses in Arabic. The popular support for murdering of Arabs who convert to Christianity, bodes ill for the Arab Spring. Car bombs, assassinations and mob attacks on Coptic churches in Egypt, murders and bombing of churches in Iraq, car bombs in Northern Nigeria attacking Sunday congregations, are stubborn facts that challenge the talking heads and editorialists who celebrated the demonstrations and uprising throughout the Middle East last year.
Emotive opinion presented as news

BBC Head of News, Helen Boaden has admitted that her journalists got “carried away” with events and produced “overexcited” reports. She told the BBC Trust report, that in Libya, where her reporters were “embedded” with rebels, they may have failed to explore both sides of the story properly. BBC Middle East Editor, Jeremy Bowen was among those criticised in the study about coverage of the uprisings. The study found that excitement infected the reporting, which was described as too “emotive” and “veering into opinion”.

The document also raised concerns about the BBC’s use of footage filmed on mobile phones and other user-generated content. It noted that the BBC failed to warn its viewers about the questionable authenticity of such footage in most of the cases. The report also warned that the BBC ignored major events in some countries, as it concentrated on selected stories.

Overexcited and one-sided
Miss Boaden said: “In the conflict in Egypt in the beginning…we might have sounded overexcited – you can take on the colour of who you are with. I had to say just be careful about your tone…In Libya too, where we were essentially embedded with the rebels at the start, we might have sounded overexcited – you have to be careful if you can’t get to the other side of the story…” Fox News has commented that none of the pundits, even though they are consistently wrong, are ever held accountable for the disastrous movements that they promote.

Irresponsible and unaccountable
On 10 February 2011, I wrote an article for JOY! Magazine, ‘What is Happening in the Middle East?’ In this article we warned: “radical groups such as the Muslim Brotherhood are tempting to exploit the instability and hijack the popular revolution to turn Tunisia from a mostly secular state to a radical Islamicist regime.”

We also warned: “An Islamicist take-over in Egypt would be a massive crisis, because the country has so much influence in the peace process with the state of Israel. Egypt is America’s key regional ally and was the first Arab state to make peace with Israel.

“The vital Suez Canal is controlled by Egypt…the popular uprising in Egypt is being described by Iranians as an Islamic Awakening, which could lead to the establishment of an Islamicist Middle East led by Iran, dedicated to the extermination of the state of Israel.”

Increased persecution
Along with the tidal wave of popular Islamic fanaticism on the streets of the Middle East, has come a sharp increase of violent persecution of Christian communities. Many hundreds of Christians have been wounded, or killed in violent attacks on Christian churches and neighbourhoods, especially in Iraq and Egypt. Tens-of-thousands of Christians are packing up and fleeing the region.

The myth of the moderate Muslim majority
With the crisis escalating throughout the Arab world, Western governments are facing a conundrum of their own making. For many years Western governments and media have been repeating the liberal mantra that the vast majority of Muslims are moderate and against terrorism. This is now being shown to be a self-deceiving fantasy. Surveys and opinion polls in Egypt have revealed that 59% of Egyptians back Islamicists; 50% of Egyptians support the radical Hamas terrorist group; 30% of Egyptians support the even more violent and radical Hezbollah. 20% of Egyptians express support for al-Qaeda terrorist group. The proposed solution by Western liberals to virtually any problem worldwide, that of ballot box democracy, is plainly not going to work in the Middle East.

After the American military succeeded in toppling Saddam Hussein’s dictatorship in Iraq and making possible the first democratic elections in that country, the result was more radical Islamicists in power and far more severe persecution of Christians than had ever been experience in Iraq before.

Deadly democracy
Our article on the Middle East in February last year also pointed out that a Pew Opinion Survey found that 84% of Egyptians favoured the death penalty for Apostates (those who choose to leave Islam). 74% of Egyptians favoured a strict enforcement of Sharia law. 67% of Egyptians favoured a Caliphate (a military dictatorship uniting all Muslims under Sharia law).
Islam does not recognise any other religion as valid. What we in the West understand as freedom of religion, to Muslims is freedom for Islam alone.
The Muslim Brotherhood, which seems poised to hijack the popular revolution in Egypt, has been responsible for the assassination of President Anwar Sadat in 1981, the birthing of the Hamas, Hezbollah and Al Qaeda terrorist movements. For some Western leaders to claim that the Muslim Brotherhood is “a force for moderation” in Egypt (despite its radical statements and bloody track record) is incredible!

The threat of a Caliphate
Those who understand Islam and the Middle East are warning that democracy will bring change, but it would be in the form of the worst nightmare – an Islamicist crescent spreading from Pakistan in the East, to Morocco in the West, a pan-Arabian Caliphate, where the word Islamicist would no longer just be shorthand for terrorist, but describe official government policy, even in capitals such as Cairo.

What can we as Western Christians do?
Scripture commands us to pray for our leaders, rulers and nations. We need to uphold these countries in prayer and support Christian organisations that are helping believers in these persecuted lands. We also need to hold our governments and media entities accountable for their role in political affairs. 