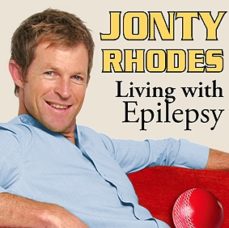 Jonty Rhodes: Living With Epilepsy
Jonty is a very busy man, so to sneak in some time for an interview was quite a feat! We caught up with him at a photoshoot he was doing for the Epilepsy South Africa Calendar for 2010/2011. Jonty does extensive work with them for the cause of destigmatising epilepsy.

WHEN DID YOU DISCOVER YOU HAD EPILEPSY?
I was about six years old when my family realised something was ‘wrong’. I kept falling about and getting knocked out. They took me to see our physician who suspected I had a mild form of epilepsy (as in those days not much was known about the condition), and even after seeing various neurologists, a final diagnosis was not made.

HOW DID/DOES EPILEPSY AFFECT YOUR PARTICIPATION IN SPORTING ACTIVITIES?
Eventually after several tests, I was identified as having epilepsy, and made aware of the various precautions I should take. (Such as not playing rugby – as my type of epilepsy is triggered by head injury). You can imagine how challenging this was at Maritzburg College, where every boy played rugby unless there was something ‘wrong’ with them!
I also had to be careful when playing hockey, and back in 1982, I was the only child on the cricket field wearing a helmet! (These days it has obviously changed).

HOW DID YOUR PARENST RESPOND TO THE NEWS THAT YOU HAD EPILAPSE?
Being teachers, my parents have always been practically minded. They never saw my epilepsy as a ‘disease’ and in fact they encouraged me to live life as normally as possible. They encouraged me to participate in sport and not to give up on my dreams.

DO YOU TAKE MEDICATION?
No. I have a ‘mild’ form of epilepsy, which means that my seizures are only activated by a concussion, and as such I do not need medication and can drive/move around fairly easily. This is not the case for many other people though who have a more severe form of epilepsy. Some are not permitted to drive (for fear of a seizure) or to operate heavy machinery. That said, most people with epilepsy live a very normal life and should not be discriminated against either socially or in the work place.

HOW HAS YOUR FAITH HELPED YOU OVERCOME THE CHALLENGES YOU HAVE FACED IN LIFE THUS FAR?
My faith has played an integral role in helping me through all the peaks and valleys I have been through, as I know Christ is there in every situation and that His Word has all the advice and wisdom I need.
My faith wasn’t always so strong though. When I first came to Christ, I was a little self-centred in my walk with God and was always concerned about what God was doing for me, and how He could help me (as opposed to what I could do for Him and His Kingdom).
It was only when I met Kate at university that I started to see what real faith looked like. As we spent more time together, (and I spent more time thinking of her!) I realised what true, meaningful faith in God was.  As I observed Kate’s walk with God, I saw how she had a sense of peace, purpose and a personal relationship with Jesus. I wanted that too, and soon my own faith was strengthened and deepened and today I am very blessed.

WHEN YOU AND KATE MET AT UNIVERSITY, YOU WERE STUDYING FOR A BUSINESS DEGREE. HOW DID YOU END UP AS A PROFESSIONAL CRICKETER?
When I matriculated, I had been playing cricket competitively, but due to Apartheid sanctions, there was no international participation or ‘career’ in cricket. As a result I went to university and studied a BComm. In my second year I met Kate, and in 1992 I proposed to her – shortly after I had been snapped by a friend taking a catch in a cricket match, that was circulated in the press and was effectively the launch of my cricketing career.
At the time, my father-in-law, who was aware of my cricketing ambitions, pulled me aside and said that I must have a decent job in order to support his daughter sufficiently. Two years later at age 24, I married Kate.

HOW DID KATE COPE WITH ALL THE TRAVELLING YOU WERE REQUIRED TO DO?
Being married to a sportsman is not an easy job, as the constant time away from home can really affect a marriage. I have been very fortunate though, as early on Kate recognised my cricketing career as part of my calling from God. Also in the early years of our marriage Kate was able to travel with me for periods of time, as she was a teacher and had school holidays.
When Kate couldn’t travel with me (especially after giving birth to our two children), she was always supporting me from home and regularly praying for me and getting her cell group to pray.
This was especially helpful when I was sharing my testimony in countries like India and Pakistan where it can be a risky undertaking.
It is funny that today, even though I am retired from professional cricket, I still travel extensively as part of my work coaching for the IPL, whilst Kate is at home raising our two lovely very active children!
HAVING RETIRED FROM PROFESSIONAL SPORT, WHAT KEEPS YOU BUSY THESE DAYS?
When I ‘packed away my bat’ in 2003, I was fortunate to take up a full-time position with Standard Bank, as I had trained as a Business banker. However, I felt that I still wanted to be involved in cricket in some capacity, and so I started coaching the fielding teams for South Africa and am also the fielding coach for the IPL Team, Mumbai Indians. Because of the cricketing time commitments involved, Standard Bank and I agreed to reduce my position to more ‘part-time’. I am also, as you know, an ambassador for Epilepsy SA and in that capacity participate in various events and functions they host.

SINCE YOUR DAYS ON THE SOUTH AFRICAN SQUAD, HOW HAS THE GAME OF CRICKET, OR THE PUBLIC RESPONSIBILITIES OF A CRICKETER CHANGED?
There are many things that have changed in the realm of international sports since my departure. Obviously there is a lot more money involved (which heightens  a player’s temptation to cheat or throw games). Also because of the rise of sporting celebrities and technology like the internet, YouTube and cellphones, sportsmen and women are under a much bigger microscope and face more pressure living their lives in the spotlight. When myself and guys like Andrew Hudson were playing cricket, the wild partying life that most sportsmen today live, was foreign. After cricket matches, guys would go down to a local restaurant or pub, have a drink, chat about the game and then go back to their rooms to sleep. Now, players go to nightclubs and have girls constantly following them around. The temptations are not necessarily greater than in my day, but they are more prevalent. I must say though, that I feel it is easier now for people to share their testimony and be open about their faith, than ever before. Countries like India and Pakistan are a lot more open and accepting of players’ sharing their faith and it is exciting to see how sportsmen and women are becoming so bold about their beliefs.

WHAT DO THE NEXT FIVE YEARS HOLD FOR YOU?
I have never been a long term planner, so this is a funny question for me! I take each day as it comes and tend to only plan a few things at a time, as God leads me. What I can say though, is that Kate and I love South Africa and we have no intention of leaving. Throughout my travels to many different countries, I have come to realise that there is no place like home. We still have so many places to explore and Kate and I are excited to raise our kids here and to see what the future holds.

FACTS ABOUT EPILEPSY
• Epilepsy is the most common neurological condition
• About 1 in every 100 people has epilepsy
• A single seizure does not necessarily mean you have epilepsy
• Epilepsy can affect people of any age
• 75% of people with epilepsy have had their first seizure before 20 years old
• People can have their epilepsy controlled by medication
• Many children with epilepsy will outgrow it
• Epilepsy is not a mental illness or psychiatric disorder
• Epilepsy is not ‘contagious’
• 1 in 20 people have a seizure at some time in their lives
• A seizure is caused by abnormal chemical activity of the brain
• Slightly more males than females have epilepsy
• There are different forms of epilepsy and types of seizures
• Some people’s seizures follow a definite pattern while others have unpredictable seizures
• Some people get a warning before a seizure
• For most people with epilepsy, the biggest problem one has to face is other people’s prejudices
• People with epilepsy can take part in sport – only water sport activity needs to be supervised by an adult.

IF ONE HAS A SEIZURE
• Do not restrain the person. Rather remain calm and turn them onto their side in the shock recovery position. Call an ambulance if necessary
• Loosen tight clothing / neckwear
• Note the duration of the seizure and the time it took place
• Don’t move the person unless they are in immediate danger
• Don’t give them anything to eat/drink
• For queries contact: 0860 374 537.