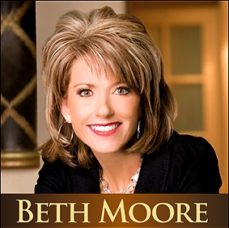 Beth Moore: So Long, Insecurity!
My entire life story grows like a wild shoot from the thorny soil of insecurity. Every fear I’ve faced, every addiction I’ve nursed, every disastrous relationship and idiotic decision I’ve made has wormed its way out of that sorrowfully fertile ground.

These are perilous days to be a woman, but to be sure, they’re the only days we have and they’re passing quickly. We can sit around like victims, talk about how unfair all the gender pressure is, and grow less secure by the second, or we can choose to become well equipped and get out there and do some real living.

Insecurity is not incurable
Insecurity among women is epidemic, but it is not incurable. Don’t expect it to go away quietly, however. We’re going to have to let truth scream louder to our souls than the lies that have infected us. Something’s wrong for us to value ourselves so little. Our culture has thrown people under the bus. We have a fissure down the spine of our souls, and boy, does it need fixing.

Seeking approval from others
A guy told me the other day that normal men never get too old to eye women. Wow. Are those of us who are married to these “normal” men supposed to keep trying to compete with what’s out there? Or should we simply tell ourselves that the roving eye of a mate is harmless? I’m not being defensive. I want very much to believe that it is. But if it is harmless, to who?

Or what if you’re single and there’s not a man on the horizon you want to take home to Daddy? Honestly, is there no validation for our womanhood apart from a man? Men are not our problem; it’s what we are trying to get from them that messes us up. Nothing is more baffling than our attempt to derive our womanhood from our men. We use guys like mirrors to see if we’re valuable. Beautiful. Desirable. Worthy of notice. Viable.

We try to read their expressions and moods in order to determine whether it’s time to act smart and hard to get or play dumb and needy. Worse yet, we try to tap into their inner equestrian by acting like the damsel in distress.

Sabotaging ourselves
Our culture is just as merciless on men as it is on women. Their insecurities take different shapes, but make no mistake: they’ve got them. As if the battle isn’t hard enough, we sabotage ourselves, submerging ourselves with self-condemnation like a submarine filling with water. How often do we think to ourselves, I should be handling this better? How often do we judge others, based on our own insecurities? Insecurity can be defined as follows: a profound sense of self-doubt; a deep feeling of uncertainty about our basic worth and our place in the world. Insecurity is associated with chronic self-consciousness, along with a chronic lack of confidence in ourselves and anxiety about our relationships. The insecure man or woman lives in constant fear of rejection and a deep uncertainty about whether his or her own feelings and desires are legitimate.

Identifying what insecurities you have
Keep in mind that you don’t have to possess every description or element associated with the definition of insecurity mentioned above, to qualify as insecure and in need of healing. Here are a few questions to ask yourself, to identify if you suffer from insecurity:

Questions to ask yourself

Do I avoid the spotlight in social situations?
Do I have a strong desire to make amends whenever I think I’ve done something wrong?
Do I cry easily?
If someone gets angry at me, do I have a hard time not thinking about it?
Do I sometimes feel anxious for no apparent reason?
Does it hurt my feelings when I learn that someone doesn’t like me?
Do I fear that my husband might leave me for someone else?

You might protest with something like this: “But Beth, I feel all or only some of those same things, and I don’t consider myself insecure.” My question in response would be, How intensely do you feel those things? Intensity is a key factor in insecurity.

No one thing will fix your insecurity problem. Only God will
If you happen to be thinking that average looks, or being shy are the problem, they’re not. An injured soul is the problem. Fixing something about yourself will not take away your feelings of insecurity. Neither will a big house. Or a man who calls you six times a day. Or great hair, (although I’m often happily seduced by the hope that it will). Neither will a big office in a financially solid corporation. Not even losing that proverbial ten kilos will fix what insecurity has broken. Any of those things might soothe the savage beast for a while, but it will inevitably wake back up, and the hope deferred will make it angrier than ever. No one solitary thing on this entire planet has the power to secure everything else. Not even a long-awaited child, as dear as he or she would be.

Insecurity is driven by fear
You and I are going to have to come to a place where we stop handing people the kind of power only God should wield over us. More often than not, if we’re willing to make the connection, we can trace feelings of insecurity to a perceived threat, especially when it comes in a sudden rush.

God’s power defeats fear
However, as we seek healing for our insecurity, it does us absolutely no good to work from the premise that we have nothing to be insecure about. Sometimes our fears are founded. Sometimes a valid threat really does arise. What happens then? Not long ago a woman wrote me a letter describing how her best friend systematically seduced her husband. That girlfriend is a threat. My suggestion is this: even when fears are founded and threats are real and we are about to be swept away in a tidal wave of well-earned insecurity, there is Divine power, wisdom, and clarity of thought to be found.

The beauty of the Lord is on us
Change will not come easy. Old habits die hard. But we can make the radical decision to rewire our security systems. When we allow God’s truth to eclipse every false belief and let our eyes spring open to the treasure we have, there in His glorious reflection we’ll also see the treasure we are. And the beauty of the Lord our God will be upon us.