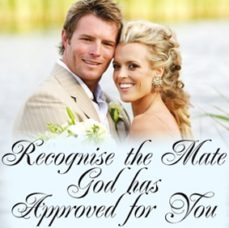 God loves marriage. It was His design from the very beginning and marriage was not simply created for the purposes of pro-creation. God hates divorce and it is His intention that you marry the right person so that you may have a fruitful  partnership in His Kingdom. If you are already married, read this article and evaluate how you and your spouse measure up to God’s standard.
If your spouse is not a Christian, pray into these areas and trust God to save them and work in the areas mentioned below.
Marriage is sowing ground where you sow your patience, love, enthusiasm and watch it multiply in those around you who celebrate your presence. Eyes require a view. Ears require sound. The mind requires thoughts. Aloneness creates vulnerability God knew it. “And the Lord said, it is not good that the man should be alone” Gen 2:18.

God Will Never Give You A Gift That Will Replace HIM
A mate is not designed to produce your joy. The presence of God creates your joy. “In Thy presence is fullness of joy”” Psalm 16:11. Your mate is a gift from God to you. That gift is intended to protect your focus, reduce distractions and create a climate of protection.
Focus often creates blindness. When you are looking North, you cannot see South. Someone else is needed for your protection, so, God provides the gift of a mate. Unfortunately, some who qualify for our attention are often unqualified to receive our heart.

Choose wisely; trust God
Bring your potential mate into God’s Presence with you. Talk to God together. Truth will emerge in His Presence that cannot emerge anywhere else. Interrogation will never produce what His Presence will. Time will expose what a thousand investigators could never produce.
Define your present relationships honestly and clearly. If you persist in an unwholesome relationship, painful consequences will teach you. Never lean to your own understanding. Lean to the heart of God. Ask the Holy Spirit what He sees in those near you. He always will reveal truth to the seeker.
Recognition Of The Mate God approves for you will bring years of joy, enthusiasm and fulfilment. 