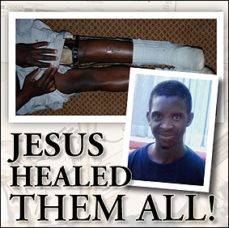 Jesus Healed Them All!
Christians are often confused when they try to match what they have been taught with what they read in the Bible. The Bible clearly states that “Jesus healed them all”, yet often, instead of the ‘healed them all’ Scriptures, Christians can only remember the Scriptures that seem to point to Jesus’ failure or inability to heal or perform miracles.

A dilemma of understanding
This dilemma between the ‘All-powerful Jesus’ and the Jesus who ‘could do no mighty works’ is simply one more in the list of ’traditions of man’ that keep the sick from being healed.

When everything goes right and the sick get well, everyone is happy. When things don’t go right, people start looking for answers. And if an answer is presented, it is often quickly accepted without investigation. In today’s religious world, there are few ‘Bereans’ that will search the Scriptures to see if what they are told matches the Word of God.

As ministers and representatives of Jesus Christ, we have a responsibility to accurately and truthfully represent Jesus. That means we can’t say what we want to or just repeat what we have been told by others. We must only say what Jesus has said and/or what He would say (which would be in alignment with what He has said).

Jesus used absolute words like: whosoever, whatsoever, all, anything and nothing. In the area of healing, Christians use words like sometimes, maybe, if it be Thy will, etc.

Do you make excuses for failure?
A general rule of thumb is that you never analyse your victories, just your defeats. A good indicator of your honesty toward the Word of God is how you deal with a failure. If you are ‘standing on God’s Word’ for healing and the person dies, how do you react? Do you go on quoting Scripture and ‘speaking faith’ or do you revert to excuses. The same excuses you were taught, but can’t be found in the Bible.

Faith and the Will of God
Another indicator is how you react after ‘praying’ for the sick and seeing no apparent change. Maybe you have learned the Biblical way to minister healing by commanding the devil and his works to depart (note: we are not commanding God to heal, we are commanding the devil to cease his operations), yet after doing so, nothing seems to have happened.

What do you do? Do you revert to the old non-biblical (and even anti-scriptural) method of looking for some hidden or unconfessed sin in the sick one – or worse yet, some sin from past generations.

Two things are important here: First, get it settled in your heart that what you are doing is the Will of God. Second, once it is settled, pray the ‘prayer of faith’ which is a prayer that states the end result that you are desiring in the form of a statement or command. This is not praying to God, it is representing God before man. It is ‘praying’ for the sick like Jesus did. He commanded. He never spoke to God about someone getting healed.

A true picture of Christ’s power
Jesus healed everyone that came to Him and sometimes He even went to people specifically to heal them. Apparently it was always God’s will to heal those who came to Jesus, and even more amazingly, they all had enough faith.

Not once did He ever tell anyone to keep their illness or to confess their sins (or the sins of their ancestors) before He healed them.

For more on these topics be sure to visit our website and attend our upcoming meetings.