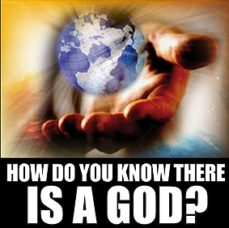 How Do You Know There Is a God?
One of the great Church Fathers, Augustine of Hippo, in what is universally recognised as one of the most influential books in History, ‘Confessions’, wrote concerning God: “You have made us for Yourself and our hearts are restless until they find their rest in You.”

A God-shaped vacuum
Millions of frustrated people are trying to fill their hearts, minds and souls with everything except God. The resultant depression, disillusionment, despair, sense of meaninglessness and hopelessness, have become pervasive. Mental disorders and suicides are extreme examples of mankind’s failure to find meaning and purpose in life apart from God. There is a God shaped vacuum in each one of us. We are created by God and we are created for God. Nothing can fill that void, except the eternal Creator.

Man’s frustration
You cannot substitute Coca Cola for petrol and expect your motor vehicle to still function effectively.  Many people try to find fulfilment in fame, fortune and fun but the end result is always frustration.

Astronomer Dr. Robert Jastrow, a former Director for space studies at NASA, wrote in ‘God and the Astronomers’: “Strange developments are going on in astronomy. They are fascinating, partly because of their theological implications, and partly because of the peculiar reactions of scientists.”  The discovery that the universe had a beginning has been most shocking for Darwinian evolutionists.  As English astronomer Arthur Stanley Eddington declared early in the 20th Century: “The notion of a beginning is repugnant.” That is hardly an intellectual reaction, but rather an emotional one.

Life and laws in the universe
As Jastrow observed: “The scientists have scaled the mountains of ignorance; he is about to conquer the highest peak; as he pulls himself over the final rock, he is greeted by a band of theologians who have been sitting there for centuries.”

‘Cosmos, Bios, Theos’ (the Greek words for universe, life and God) is a monumental book from 60 respected scientists, including 24 Nobel Prize winners. The co-editor of the book, Yale Physicist, Henry Margenau, concluded that there was “only one convincing answer” for the intricate laws existing in nature. And that one convincing answer is: “Creation by an omnipotent – omniscient God.”

Atheism is irrational and unprovable
Atheism is irrational. Atheism is a universal negative. It is impossible to prove. No one can possibly prove that there is no God in the universe. To do that they would have to be all-knowing and everywhere present.  Every effect must have a sufficient cause to account for that effect.

We see proof of intelligent design everywhere. Every day and every night.“The Heavens declare the Glory of God; and the firmament shows His handiwork. Day unto day they utter speech and night unto night reveal knowledge.” Psalm 19:1-2

Evidence of the Creator
We see evidence of the Creator’s design everywhere. For example, the human eye contains 400 million cones, 300 million minute fibres and 50 million tiny nerves called rods. Every one of these millions of cones, minute fibres and rods adjust themselves automatically so that we can see a full range of colours, in intricate detail, from both near and far. The Bible contains more than 2000 specific prophecies which predicted events which have already been fulfilled in detail. There is no close parallel in any other writings on the face of the earth.

An intelligent wager on truth
French scientist Blaise Pascal proposed what has become known as Pascal’s Wager. Pascal logically demonstrated that it is more intelligent to risk your life on God’s existence than to bet against it.  For, if there is no God, or eternal life, and we simply cease to exist when we die, then we have lost nothing by having believed in God.

The Lord Jesus declared: “Whoever causes one of these little ones who believe in Me to sin, it would be better for him if a millstone were hung around his neck, and he were drowned in the depths of the sea.” Matt 18:6

Hostility to God and His Law
It would appear that many who are fighting against God, against the Bible and against any public expression of Biblical ethics, such as public displays of the Ten Commandments, are doing so because they themselves are living in sin and breaking many of these Commandments.

“The fool has said in his heart, ‘there is no God’.  They are corrupt, they have done abominable works, there is none who does good.” Psalm 14:1

Darkened Hearts
Romans 1:18-32 summarises today’s cultural war and the emotional reactions it evokes. Those who reject the knowledge of God and are not thankful to God, evidence darkened hearts and turn to idolatry, immorality and perversion.

For most people, their passionate rejection of Christianity and embracing of atheism has nothing at all to do with facts of science or history. Rather, it is often an emotional reaction to justify something in their own lives. As Russian author, Dostoevsky wrote: if God did not exist then everything could be permitted.  Historian Will Durant wrote: “The greatest question of our time is not communism versus individualism, nor Europe versus America, nor even the East versus the West; it is whether men can bear to live without God.”

Atheism cheapens life
However, atheism makes life cheap and it deprives life of any meaning or significance. Atheism also deprives life of freedom. Those who declare that there is no God also teach that there is no such thing as your mind. It is just the brain that secretes thoughts like the liver secretes bile. They teach that you have no real control over the brain bile that you ooze out. In ‘Beyond Freedom and Dignity’ B.F. Skinner concluded that we are biologically determined in absolutely all that we do, we therefore have no dignity and no freedom, and we are not responsible. As we have no real freedom, we have no real guilt. Richard Dawkins suggests that Christianity is a ’mind virus’.

God has and will endure forever
However, in historian Paul Johnson’s book ‘The Quest for God’, he writes of ‘The God who would not die’:  “From one perspective – the perspective of human spirituality – the most extraordinary thing about the 20th Century was the failure of God to die. The collapse of mass religious belief, especially among the educated and prosperous, had been widely and confidentially predicted. It did not take place. Somehow, God survived, flourished even. At the end of the 20th Century the idea of a personal, living God is as lively and real as ever, in the minds and hearts of countless millions of men and women throughout our planet.” “He has put eternity in their heart.” Eccl 3:11

H.G. Wells is best known for his science fiction books such as ‘The War of the Worlds’ and his history book: ‘A History of the World’. In his classic short story ‘The Country of the Blind’, he writes about a tribe of people living in a large valley.

A story of man’s blindness
A plague had rendered them all blind and this blindness was passed onto their children, to their children’s children, for generations. For centuries the tribe had lived in perpetual darkness so that even the very concept and memory of sight had disappeared. They were cut off from the surrounding world by mountains. But one day, an adventurous member of the tribe tried to find his way over a high pass in the mountains. He slipped and fell a long way until at last he lay unconscious. Because the hearing of the people in the valley was acute, they heard his landing.

Deluded and deceived
When they found the man and revived him they were astonished to hear him babbling about sight and colours. Something must have happened to his head when he fell because he was talking about things that obviously didn’t exist such as blue skies and colourful flowers. As he talked about his eyes, his vision, and what he could see, the people concluded that he was obviously out of his mind. He was delusional and the people put up with his babblings.

The source of the problem
As months passed the one seeing member of the community was affected by the beauty of the chief’s daughter and asked for her hand in marriage. Of course the request was denied. It just wasn’t right for the daughter of the chief to marry the village idiot. However, as the daughter felt sincere love for him it was decided that they could get married, as long as the man’s eyes were gouged out. As the man’s eyes were the cause of his problem, they could restore him to his right mind by removing them. Then he could marry the chief’s daughter. Incredibly, he agreed.

When the day approached for the surgery and he lay on the operating table, the man came to his senses, ran out and disappeared. Now, of course, this story is fictional. H.G. Wells was by no means a Christian. However, this story appears to be a most remarkable parable reflecting the reality of the world in which we live.

Spiritual blindness
Because of the Fall and the depravity of man, the whole human race has tumbled into a valley of the spiritually blind. Because of sin, the natural mind is darkened, the will corrupted. Through sin we have lost our spiritual sight and our spiritual hearing. “The natural man does not receive the things of the Spirit of God, for they are foolishness to him; nor can he know them, because they are spiritually discerned.”  1 Cor 2:14

So Sigmund Freud declared that all religions are either ‘psychosis or neurosis’. Secular humanists have worked hard to exclude spiritual reality from textbooks, films and news media, and to ridicule those who believe in God. The natural man is degenerate, depraved, sinful, lost, blind and spiritually dead. In a nutshell, the Bible tells us of generation (Creation), degeneration (the Fall), and regeneration (Redemption and Restoration). Jesus Christ makes all things new (Rev 21:5).

God is not hidden from us…
Those who reject God do so despite the witness of Creation. They reject Christ despite the witness of His Resurrection. They reject the Holy Spirit even when He convicts them of their sin. And then they protest: Where is God? Jeremiah declared that the people had apostatised from God. They worshiped false gods, defied the Laws of God and when His Judgement inevitably fell they asked where God was! “A man’s own folly ruins his life, yet his heart rages against the Lord.” Prov 19:3. God is not hidden. He has been revealing Himself in Creation, through our conscience, and in and through our Lord Jesus Christ. Our sin makes God seem hidden. However, just because a blind man doesn’t see something doesn’t mean it isn’t there.