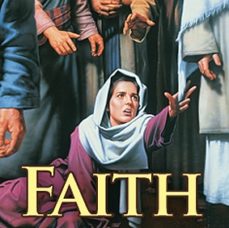 Biblical Faith – Part Four
God has already given you a measure of faith. You do not have to ask, beg or pray for faith. What you have to do now is develop the faith that you have. The measure of faith is like a muscle. To develop a strong muscle, you need good food and good exercise. Feed your faith with the Word (Matt 4:4) and exercise your faith daily (Jam 2:17). Receive the Word and apply it, otherwise you will become a fat Christian (eating with no exercise)!

Constantly exercise your faith
Never, ever find yourself in a position where you are not exercising your faith for something. Constantly feed and exercise your faith. “For assuredly, I say to you, whoever says to this mountain, ‘Be removed and be cast into the sea,’ and does not doubt in his heart, but believes that those things he says will come to pass, he will have whatever he says.” Mark 11:23 . Believe you have received it when you pray, not when you see it.

Head faith versus heart faith
The devil has ‘hoodwinked’ the Church and given us a substitute for faith. It looks like faith, it sounds like faith and few people can tell the difference. It is called mental assent! (Head-faith). This means that you simply agree that something is true but fail to act like it is true. Many say they ‘believe’ everything about the Lord Jesus. They say they ‘believe’ that the Bible is true, yet they are not trusting Him or His Word for anything today. This is not faith but mental assent. The Biblical word for believe is the Greek word ‘Pistevo’ which means ‘to adhere to’, ‘to cleave to’, ‘to trust in’, ‘to have faith in’, to ‘rely on’. This does not mean that you simply agree that something is true but that you become one with the truth you have received, and act, speak and behave like it is true.

You avoid mental assent by being a doer of the Word
Isn’t it strange how people will act on the word of husband, a lawyer, doctor or a wife and yet won’t act on the Word of God? Man could lie, but God cannot lie. “Therefore I say to you, whatever things you ask when you pray, believe that you receive them, and you will have them.” When you pray believe that you have received.

The faith man thanks and praises God for it when he prays because he already believes he has received. The Kingdom of God is internal to external.  “He (Abraham) did not waver at the promise of God through unbelief, but was strengthened in faith, giving glory to God.” Rom 4:20  Praise is the highest expression of your faith, it is the voice of faith. Abraham received God’s promises and believed that he already was the father of many nations. Often when we physically experience the hardship of a circumstance it becomes increasingly difficult to exercise faith. This is where the fight takes place. Abraham was fully persuaded that what God had promised, He was able to perform. He had no children and was 75 years old; yet God called him the “father of many nations”. Abraham believed the Word of God ahead of his circumstances. Strong faith may be defined as “being fully persuaded that what God has promised, He is able to perform”.

How to have strong faith
Strong faith does not wave/stagger at the promises of God through unbelief. The difference between Abraham and Thomas in terms of their faith, was that Abraham believed God apart from physical signs, but Thomas believed the physical signs and would not believe the Word. Thomas believed his five senses. Abraham believed the Word. When circumstances contradict the Word, reject the circumstances and go with the Word. Paul shows how these principles of faith are demonstrated in:

1. The woman with the issue of blood (Mark 5:21-34)
• This woman with a debilitating illness heard about Jesus (faith comes by hearing the Word). She believed if she touched Him, she would be healed. She believed before she saw. Jesus said, “Daughter, your faith has made you well.” Therefore we need to believe before we see the results.

2. David and Goliath (1 Samuel 17)
• David, despite the fact that he was only 12 years old, did not look at the size of the giant, and did not put his faith either in his own weapons or his own abilities, but lived and fought by faith in God. He lifted his eyes and trusted God for the victory.

3. The man whose friends let him down the roof to Jesus (Mark 2:1-5; Luke 5:17-20)
• Jesus was preaching the Word and such was the friends’ faith that they lowered the man through the roof when they could not enter the room. Jesus forgave the man’s sins, and then healed him. When Jesus saw their faith, He healed the man. Faith has bulldog tenacity. When you are trusting God for something in your life, no matter what comes your way, hang onto God’s Word until you receive it. Just like a bulldog will keep holding onto whatever it has bitten into until it wins that prize, keep trusting in God and holding onto His promises. If you diligently seek Him, He will reward you with the fulfillment of that promise.

4. Blind Bartimaeus (Mark 10:46-52)
• When he hears Jesus is on his way, Bartimaeus begins to shout for Him. Through opposition, he continues to shout louder. He was going to receive what he desired. Jesus heard him, called for him and healed him.

In closing, don’t give up believing in God to fulfill His Word when your circumstances show otherwise. Faith is believing the unseen. To build your faith, read the Word, consume the Word, believe the Word and act on the Word.