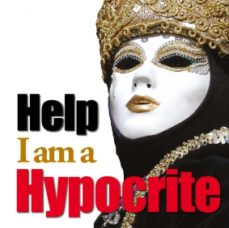 The difficulty in writing about hypocrisy is that I am a hypocrite! We all are to some degree. The frustration for every Christian preacher and teacher is communicating perfect truths and standards, knowing we’re inconsistently faithful vessels ourselves. Yet at the same time in Christianity our tendency is to judge others, to see the faults in others rather than in ourselves!
A hypocrite is simply someone who conveys one thing but does another. The term comes out of the ancient Greek theatre. The actor wore a mask that exaggerated his particular role. The audience were in no doubt who the actor was portraying and so the word came to mean “anyone who pretended to be what he was not”. Jesus tapped into this relevant understanding of the day and got great mileage out of the illustration to address head-on the duplicity conducted by many. A corruption he did not want in His disciples. Luke 12:1 “He began to say to His disciples first of all, ‘Beware of the leaven of the Pharisees, which is hypocrisy.’”

Hiding behind masks
His men were to become the prominent leaders, the blueprint for the Gospel and examples for the Church to emulate. Public profile personalities in the Church are still a concern for Jesus. Too often today, the Church world is akin to the stage and its main stars so similar to masked actors that it’s hard to tell the difference between the two. There’s enough masked men around to warrant a full billing for the Christian version of the Oscars! Warren Wiersbe recounts the great artist Raphael, who was painting his famous Vatican frescoes when a couple of bureaucratic church leaders paused to watch and criticise. “The face of the apostle Paul is too red,” said one. “He blushes to see into whose hands the church has fallen,” replied Raphael.
Followers take their lead from the top. They absorb the culture of conduct from leadership. So when leaders engage in questionable practices, they set the standard for the next generation of followers. Much has been addressed where failed leaders have been under the spotlight for blatant violations, but what of the less conspicuous treachery?

No place for prima donnas
One common, but wrong practice, is garnishing the real story. Preachers giving embellished testimonials about alleged miracles, revivals, numbers of conversions, church membership and finances and the rest. It’s called speaking ‘evangelistically’. Exaggeration is a lie and liars don’t go to heaven. What’s just as worrying is how many people believe the lies! Whether the motivation is either the bruised or inflated ego probably varies from preacher to preacher, but it’s just not right. Paul was adamantly careful about his reputation via communication and he definitely had cause for great stories…he had even been to the third heaven. “For though I might desire to boast, I will not be a fool; for I will speak the truth. But I refrain, lest anyone should think of me above what he sees me to be or hears from me.” 2 Cor 12:6
The Bible encourages us to give good reports; “to make the bones fat”. Give me the two spies reconnaissance debrief of faith any day over the ten prophets of doom and their bad press – but let’s stick to the facts. Bolstering a story just to make me look good is really a sign of unbelief. God is our keeper. He will reward ministry and promote our influence when and where He wants to. Trying to advance our reputation by furnishing the real story with a few savoury touches is carnal in its nature and will only produce a carnal outcome.
Being genuine denotes being free from hypocrisy or pretence. When God calls men into leadership, or more specifically, the role of a pastor, he calls a man according to His heart. This man should have the heart of a shepherd. As the great shepherd, Jesus has called under-shepherds to reflect His heart and embrace His example. Meaning, His disposition will reflect in their conduct with His Church. The apostle Peter says, “…serving as overseers, not by constraint but willingly……nor as being Lords over those entrusted to you, but being examples to the flock”. How far this is from so many preachers today who by all accounts serve themselves! In the imagination of their own minds they’re so important that they are virtually unapproachable. They can’t be contacted directly, their phone numbers are private and a member of their entourage is commissioned to screen any possible public intervention. This would all be justified by (in their mind), how big their ministry is. No, they are behaving like prima donnas!

Accessibility
By all standards Jesus had a fairly significant ministry. He could pull a serious crowd and at times had to remove Himself from the masses to maintain His focus. Yet he resisted any attempt to be elevated to celebrity status and strived to remain accessible. Account after account shows His demonstration of the personal touch. Nobody enjoys the fishbowl existence of those on display in ministry but unfortunately the transparency required just goes with the job. The authentic pastor has a shepherd’s heart, he sincerely cares, he’s interested in his people and he’s concerned. He loves to fellowship with them personally and engages with them one on one. Certainly as a congregation increases in size this becomes more difficult, however he will prioritise this problem and find ways to have access to all his flock. This is why the mega-church cannot fit into the plan of God, but that’s another discussion…

Neglecting the world
The insecure or insincere man of God also has great difficulty with people who no longer fellowship in his church. Yes, of course there has always been and always will be those cases of people who have departed in rebellion or have found themselves out» of fellowship because of sin. However, not everybody that moves on is a rebel or a backslider! I’m not condoning church hopping or the spiritual butterfly that alights for a moment and then migrates to the next port of call. People need to be committed. Sometimes though, there exists personal circumstances that dictate a more suitable spiritual home. The genuine shepherd should have the congregant’s eternal soul and spiritual  well-being as his priority, and not his church attendance average and membership record. How quickly, when an individual no longer attends one particular church, do the loving and compassionate members and its leader withdraw their love and concern towards that brother or sister in Christ? Hypocrisy! John 13 Jesus said, “……by this all will know that you are my disciples if you have love for one another”.
It’s critical that when people depart, for whatever reason, that the door remains open so that in the event they decide to return, and repent when necessary, they can. In the prodigal son and the parable involving the hundred sheep with one going astray, the emphasis of rejoicing is over the restoration and recovery of the estranged individual. This can’t happen if the shepherd and the rest of the sheep close the gate. Without adding too much to the debate over doctrine, it cannot be ignored when pondering the subtleties of hypocrisy. If shepherds are called to feed sheep, and they are, it is a worry that there are so many starving and emaciated walking carcases on the landscape of the church world. God has called shepherds to “…feed……with knowledge and understanding.” Jer 3:15. We’ve all had the experience of ordering at a restaurant and the waiter bringing the wrong order. Hopefully we’re polite even if indignant, about not receiving our request. As the authority and author of the spiritual cuisine of the Word of God, He is just as concerned as the pedantic restaurateur that His Word is delivered as He expected. So much preaching today is little more than man’s opinion with a distinct absence of any value or balanced content. Invariably Scripture is used out of context or as a pretext, the minister failing to preach the whole text. Another classic antic is the hobby horse subject, regurgitating the same brilliant idea for weeks, sometimes even months on end. Like children, the people of God need a balanced sermon diet. Some well known celebrities and TV preachers are immediately recognisable by the hype and a peculiar dearth of doctrine. At times I’ve been embarrassed for them and I’m not even really there; their Las Vegas entertainer attire sparkles under the spotlights while the message is nothing more than shrivelled up leftovers exposing their lack of depth and minimal accurate Biblical content. Paul said in Timothy “……labour in the Word and doctrine.” Labour in Greek means work hard, toil, be wearied! That means the same thing in any language on the planet. In a later letter to Timothy, Paul reinforced again to his young protégé the same emphasis. “Be diligent to present yourself approved to God, a worker who does not need to be ashamed, rightly dividing the Word of Truth.”  2 Tim 2:15.
You’d be hard pressed to find a Christian who would disagree that the Word of God is not of fundamental importance, why then is it so commonly neglected? No, none of us can claim to be the ultimate and consummate authority on doctrine and, acknowledging that fact in itself, should sober us that we’d exercise great caution. Recognising our own need to know and to grow must then surely manoeuvre us into the discipline of study that we might not be weighed and found wanting.

Be accountable
Hypocrisy is the disease from which we all suffer. In one sense I’m a hypocrite for even writing all of the above. So instead of believing our own press, every one of us needs to undergo an honest self-evaluation. The best examination is the Word of God. Nothing can probe deeper and more effectively than the illuminating light of Scripture…the two-edged sword that can pierce even to the division of soul and spirit and reveal the thoughts and intentions of our heart. And we need some accountability. Namely some friends, some peers, some spiritual covering in the form of spiritual headship. Left to ourselves we’re a danger to our own hearts and to the integrity of the Church. Prov 27:6 says, “Faithful are the wounds of a friend.” We don’t need a fan club; we need some brutally honest confidents who care enough to tell us the truth when we need to hear it. I’m not talking about insensitive critics who have an agenda of their own, but time-tested friendships with people of character and integrity. The devil is a specialist in deceitfulness. Great churches and ministries without great ethics, lead to great deception. There’s an old saying,  ‘The hand that means to make another clean, must not itself be dirty’.