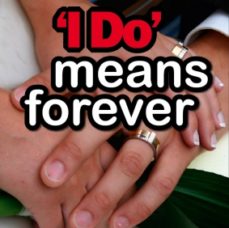 What does it mean today when couples say the words ‘I do’?  Does that mean they are really saying ‘I do, as long as it works out?’ or merely ‘I’ll try’?
You can choose to get married – no-one holds a gun to your head. Yet, it is the truth that at the time of exchanging vows, people merely mouth off: ‘I do’. Society today has no clue as to the depth of uttering those two little words. Imagine yourself in front of the Marriage Officer, a smile on your face, looking into the eyes of the person to whom you pledge loyalty, for as long as you both shall live. Now quietly say the words, ‘I do’. What exactly does that mean?
Saying ‘I do’ is an action. It does not merely mean ‘I’ll try’. When the honeymoon is over, the harsh reality of two different people coming together calls for the proverbial ‘when the rubber meets the tar’. This is a definite reality check.
When we look at the destruction of marriage, the demise of the home, the many children torn apart between two parent groups, we have to take a hard look at ourselves. Do we really, firstly, understand what we meant with ‘I do’ and secondly understand the depth of the marriage commitment? Actually, it is more than a commitment, it is supposed to be a covenant. That is where marriage originally comes from. It comes from a God who covenanted with His people by moving through the blood of sacrificed animals. The parallel and symbolism which that holds for modern day marriage is amazing.
A covenant marriage says: “I sacrifice myself, by choice, to you, forever”. If we put an acronym to the word commitment within the ambit of marriage, it will look something like this:
C – Choose to love unconditionally
O – Only you and me
M – Marriage was God’s idea
M – Many trials and tribulations
I   – I hold the key to my own happiness
T – Together we can work out anything (resolve conflict)
M – Make time to communicate effectively
E – Encourage each other daily (speak into his/her love language)
N – Never mention divorce
T – Trust each other implicitly

Saying ‘I do’ on that big day, should stimulate us to think investment. If couples are serious about their ‘I do’ commitment, then sporadic marriage enrichment should become a planned entity. Someone once said: “Life becomes what you plan”. So put away R100 per month which you use once a year to invest into growing in your relationship with each other. This could take various forms such as investing in a marriage DVD series or going on a marriage retreat.
Just imagine if the vows to which we so easily respond ‘I do’, sounded more like:
“Do you take me in a time when I get so sick that I cannot eat without being helped. Will you love  me  enough to help me through when I fall into the trap of developing a gambling habit. Do you accept that sometimes for days I might not feel like showing love to you?”
The question arises; will you still say ‘I do’?  I guess not!  When we say ‘I do’, we are really saying: ‘I choose to love you, even when you do not deserve it’. ‘I do’ then, does not mean ‘I will try’, or ‘I will stick with you as long as it works out’. It means I ‘choose’ to be with you forever!

Coping with Marriage: 7 Critical Areas
Once you have made up your mind to stay in your relationship until ‘death do you part’, you will come across seven areas in particular which could challenge you beyond your wildest dreams. Let us look into these seven most common areas:

1. We have lost our love for each other, or I have fallen out of love
There is no greater lie than this. One or both of the parties have simply chosen not to love anymore. Put another way, you have moved the focus from putting your spouse first, to putting yourself first. In fact, this is loosely described as the unholy trinity, namely: ‘I, Me and Myself.’ What then is the resolve? You have to know how your partner wants to receive love. A study was done by Dr Gary Chapman called: ‘The Five Love Languages’ which is available in bookstores. This study covers the principle of each person identifying their particular dominant love language. This means, for example, if I enjoy touching other people, I most probably would love touch as a form of endearment or appreciation. That then would be the way I would feel loved.

2. We are always fighting
This is problem number two which brings so many relationships to the throws of divorce. The problem at hand would be that the couple has the inability to cope with conflict effectively. The true reason for that would be that they actually have never acquired the skill or skills to go through the conflict at hand. The normal problem lies in that the two involved in the argument are channeling accusations toward each other as opposed to focusing on the problem. This is a technique which can be acquired, but demands discipline and self control.

3. He/She is always Angry
The devil loves it when you lose it. In fact, he will exacerbate the problem by choosing times of high probable tension to trick us, It is so much more difficult to control ourselves when situations aggravate the circumstances.
Anger, per se, is not a bad thing. It just says something is out of line and I do not feel I am coping with the situation. Your anger is normally caused by one of three reasons: fear, frustration or hurt. How you channel that anger becomes your challenge.

4. We are so different
We all have a behavioural style which plays a vital role as to how we get along with others. Some people are naturally extrovert, whilst others are introvert. There is no right and no wrong, but it does play a role.
• Some people are Driven, Decisive and Dominant. Those people are called Choleric.
• Others are Influential, Inspirational and Impressive. Those we call Sanguine.
• People, who generally are Stable, Steady and Supportive, are called Phlegmatic.
• Those who are Compliant, Critical Thinkers and Correct in their ways are called Melancholy.
These brief descriptions are but a tip of the iceberg. There is so much more to the complexity of man – no wonder that gives due reason to quarrel and fight about little things. Incredible to notice that the Word of God in James 4:1 states just that and then proceeds to tell us it is as a result of that which wars on our inside.

5. We can’t seem to speak to each other without emotions getting out of control
This is nothing other than a lack of effective communication. People may be speaking, but that does not mean it is making any sense. The other problem with communication is that the other party invariably is only listening with one ear, as whilst their partner is speaking, they are already preparing what to say. The centre of the problem lies in the fact that couples start attacking one another, as opposed to standing together and rather addressing the problem. Finally it must be noted that there are five levels of communication. The average struggling individual rarely proceeds to level four or five which ultimately epitomises effective communication.

6. We don’t trust one another
This is a weightier problem to resolve than the normal disagreement. Usually far more time is required to work at resolving this problem. This is not a problem that shoots up overnight. Invariably it is the result of a series of situations which eventually lead to distrust. The other problem is that one of the two parties brought a problem into the relationship influenced by life, causing them to be distrusting. This results in the situation that the other person is at a disadvantage. There is no quick solution to this scenario as it takes time to trace where the problem originated from. The question then arises: ‘How do we learn to trust again?’ Answer: ‘You give trust in order to cultivate trust.’

7. He just wants sex. I am not a piece of meat
Ouch. This sounds harsh. Yet, whilst some will voice their feelings, others will feel injured, but won’t know how to express what they are experiencing. Women have been created beautifully. Men need to acquire the art of exercising non-sexual touching. When God said: ‘Let them be one’, He did not only mean physically but also spiritually. We have been created to enjoy intimate relationships. God also said in Genesis 2:25: ‘They were both naked and they were not ashamed’. It is man’s sinfulness in the area of lust which has taken something beautiful that God ordained and perverted it to the extent where so much hurt is caused.
In general, men fight the reality that they seem to need physical affection more frequently than women. It is fact that women appreciate tenderness, appreciation, up-building words and an attempt to understand them, which assists them to want to be there for their partners.
The word of God describes the Father heart for a healthy sexual relationship in 1 Corinth 7: 3-6.
In conclusion, why not read and attend talks on relationships? All of us have room for improvement and development. Practical advice is available! There are DVDs available to assist you in learning how to cope with these 7 Critical Areas.

The DVD, ‘How to Apply the Five Love Languages’ is available from selected bookstores or Happy Families.