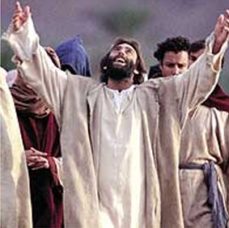 The year was A.D. 155, and persecution against the Christians was sweeping across the Roman Empire.  The Pro-Consul of Smyrna put out the order to arrest the Bishop, Polycarp. The crowd screamed when they saw this famous Christian leader enter the Colliseum. They wanted his blood. The Pro-Consul, however, offered him a way of reprieve: “Pity your grey hairs. Just curse Christ and I will release you.” Polycarp responded, “Eighty-six years I have served Christ and He has done me no wrong. How then can I blaspheme my King who has saved me?”

The Pro-Consul reached for a compromise: “Then just do this old man. Swear by the genius of the Emperor and that will be sufficient.”  Polycarp responded, “If you imagine for a moment that I would do that, then you pretend not to know who I am. Hear it plainly: I am a Christian!”

The Pro-Consul commanded him to say, “Away with the atheists!” referring to the Christians who were considered atheists because they didn’t worship the Roman gods. Polycarp pointed at the jeering mob in the stands and cried out, “Away with the atheists!” Then Polycarp was threatened that he would have him eaten by wild beasts. “Bring them forth,” said Polycarp. “I would change my mind if it meant going from the worst to the better, but not to change from the right to the wrong.”

The Pro-Consul’s patience was finally exhausted: “I will have you burned alive,” he warned. Polycarp responded, “You threaten me with a fire that burns for an hour and then is extinguished. But you know nothing about the fire of eternal judgment that will burn forever and ever. Bring what you will!”

The fire was prepared. As Polycarp was burned to death he prayed and praised God with singing. As the fire engulfed him, many people were converted to Christ in the stands. That was February 22, A.D 155.
What is it about a man in those worst of circumstances that enabled him to behave in such an extraordinary way and make it his greatest moment? He trusted Christ.

Polycarp was mentored by a man who knew Jesus Christ in the most unusual way. Polycarp’s mentor was the Apostle John. Thousands thronged around Jesus, hundreds followed Him, but only a dozen became His disciples. And of that twelve, three were in the inner circle – Peter, James and John. And John was described as the disciple whom Jesus loved. John must have passed on something of that unique relationship to Polycarp.  It can be summed up in these words: John trusted Jesus.

True Discipleship
The Apostle John wrote: “While He was in Jerusalem at the Passover Feast, many people saw the miraculous signs He was doing and believed in His Name. But Jesus would not entrust Himself to them, for He knew all men. He did not need men’s testimony about a man, for He knew what was in a man.” John 2:23-25

In Jerusalem, many people believed in Jesus. But He did not believe in them. They trusted in Jesus, but He did not trust in them…because Jesus knew their heart motivations. They believed when they saw the miraculous signs He was doing. It’s an interesting point that when you look at church history, you see that as the cost of discipleship increases, the numbers decrease. We shouldn’t be surprised at this. At the first church picnic, over 5 000 people turned out. It is a fact, if you want a larger attendance, throw in a free meal. At the Sermon on the Mount there were several hundred.

For the first church prayer meeting in the upper room, there were 120 who gathered for Pentecost. When it came to the first mid-week outreach there were 70 who went out, two by two, to evangelize, in the highways and the byways. And when it came for daily discipleship, when the Lord wanted men and women to be with Him day and night to follow Him and to be where He was, there were 12 men, and about 5 women.
And of those 12 men, only 1 went all the way to the cross. One betrayed Him, one denied Him, one doubted Him, and they all forsook Him. Only John went all the way to the cross and stood, with the women disciples, beneath the cross and identified with the sufferings of Christ.  As the cost of discipleship increases, the numbers decrease. When we look at John’s life, we see that John trusted Jesus.

John trusted Jesus enough to forsake prosperity.
John’s father had a family business and a second home in Jerusalem. John had ready access to the house of Caiaphas, the High Priest. But one day, John was captivated by a man who spoke like no other man had ever spoken before.  John was drawn to Jesus. He sensed the person and the power of God in Jesus. When Jesus said, “Follow Me and I will make you a fisher of men,” John gave up everything he owned to follow Jesus.

He trusted Jesus enough to risk his life for Him.
At the Mount of Crucifixion, John was the only man to stand at the cross – at the risk of his own life. John had followed Jesus when the thousands applauded Him, when the miracles were performed and when the Lord was multiplying the loaves and the fishes, when the crowds waved palm branches and cried out: “Hosanna! Hosanna! Blessed is He who comes in the Name of the Highest!” It was quite another thing, however, to trust Jesus when He was dying a disgraceful, criminal death, humbled on the cross. John trusted Jesus enough to risk his life.

John trusted Jesus enough to remain anonymous.
It is a fascinating fact, that in John’s Gospel, he never mentions himself by name. He refers to Peter, Andrew, James and Judas, but he never writes his own name. He refers to “the other disciple” or “the disciple whom Jesus loved.”  John could trust Jesus either to make Him famous or to leave Him anonymous and lost in obscurity. John did not need to promote himself. There’s another side to this relationship that’s quite different. John trusted Jesus, yes, and Jesus trusted John.

Jesus trusted John to write one of His Gospels in which we read all kinds of new information that we wouldn’t have otherwise had. Jesus wanted more of His story told, different miracles mentioned. A new perspective that had not yet been presented.  He chose someone He could trust to do that job. He had to get it right. John had been on the Mount of Transfiguration. He had sat next to Jesus at the Last Supper. He had heard that whisper about Judas. He had information that no one else could give. Jesus chose someone He could trust to get the story straight. To communicate what was most important.

Because John was trustworthy, we have these most beloved and familiar words from the Bible:
“For God so loved the world that He gave His one and only Son, that whosoever believes in Him should not perish, but have everlasting life.”
“Behold the Lamb of God Who takes away the sins of the world.”
“Unless a man is born again, he cannot see the Kingdom of heaven.”
“I am the Bread of Life.”
“If any man is thirsty, let Him come to Me and drink. Whoever believes in Me as Scripture says, streams of life-giving water will flow from within him.”
“Neither do I condemn you. Go and sin no more.”
“I am the Light of the World, whoever follows Me will never walk in darkness.”
“You will know the truth and the truth will set you free.”
“I am the Good Shepherd. The Good Shepherd lays down His life for the sheep.”
“I am the Resurrection and the Life.”
“I am the Way, the Truth and the Life. No one comes to the Father except by Me.”

Jesus trusted John with His love. It’s a most extraordinary thing to be described as, “the one whom Jesus loved.”  To be considered Jesus’ best friend. We read that Enoch walked with God and that Enoch pleased God. We read that Enoch was taken up to be with God. Abraham was called God’s friend.  Moses spoke with God and God spoke to him face-to-face. David was described as, “A man after My own heart.”
I wonder what it would be like to know who was the Lord’s best friend on earth? What do you think would happen? Imagine if we could know, “This is the person whom God loves the most.” Do you know what would happen in 2007 if someone from our country was identified as Jesus’ best friend? They’d probably put out a CD or go on a “Best Friend of Jesus Seminar” speaking tour. There would be a tremendous potential of ruining that person’s life. Jesus chose John to be His best friend with the confidence that he would never misuse their friendship.

Jesus trusted John with His mother.  In John 19, we read the last gasping breaths of our Lord, whose excruciatingly painful crucifixion allowed very little breath for speaking. Jesus, in agony, said seven phrases from the cross: “Father forgive them, for they know not what they do…It is finished…Into Thy hands I commend My Spirit.”  And He gasps out to Mary “This is Your Son.” Then to John he says, “This is your mother.” As the eldest son, He was responsible for His mother’s care. Now soon to die, His hands nailed to the cross, He couldn’t (humanly speaking) care for her as He should. So His most important human responsibility on earth, He entrusted to John.

I am sure that you’ve probably been asked many times: Do you trust Jesus? I hope your answer has continued to be a resounding, “Yes! I do. I trust Jesus completely. I would trust Him enough to devote my wealth and to risk my life and reputation.” But, let me ask you, “Does Jesus trust you?”

Can Jesus trust you?