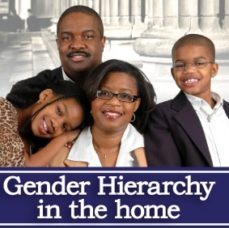 The debate surrounding the roles of men and women in marriage, the family and society has been raging for decades. Not surprisingly, the controversy has found its way into the Church. Various Christian denominations have attempted to address the issue of women’s leadership in the Church without any clear resolutions. It is interesting that various Christian literature and films have reignited debate about doctrines known as ‘Christian Patriarchy’ and ‘Complementarianism’, which some have argued promotes gender hierarchy in the Church and home; teaches that a wife should obey her husband unconditionally (even if he instructs her to sin) and denies women of freedom to vote and work.

Issues around patriarchy
Despite growing confusion in the world about gender roles, the Scriptures clearly outline the distinct roles of men and women in marriage and the family. Much of the discrepancy about the roles of men and women in society is a result of sin and the blatant disregard of the guiding principles of God’s Word.
God was not confused when He created male and female and determined their purpose in the earth. In Genesis 1:26–28 God creates (Hebrew ‘Bara’) the immortal spirit of mankind, divides that spirit into male and female genders, blesses them, and gives them dominion to replenish and rule the earth. Genesis 2 records the making (Hebrew ‘Asah’) of the man and woman’s physical bodies and God’s instructions to Adam. “Then the Lord God took the man and put him in the Garden of Eden to tend and keep it. And the Lord God commanded the man, saying, ‘Of every tree of the garden you may freely eat; but of the tree of the knowledge of good and evil you shall not eat, for in the day that you eat of it, you shall surely die’.” Gen 2:15-16.

God’s design for mankind
It is important to note that when Adam received God’s commandments, the woman was not yet made a living being. In Genesis 2:18 “And the Lord God said, ‘It is not good that man should be alone; I will make him a helper comparable to him’.”
Later in verses 21–25, God forms woman from the man. “And Adam said, ‘This is now bone of my bones and flesh of my flesh; she shall be called Woman, because she was taken out of Man’. And because woman was formed from the side of man, she is (re)joined with man in marriage, thereby re-establishing the original creation purpose of mankind.
Therefore a man shall leave his father and mother and be joined to his wife and they shall become one flesh” Gen 2:24. This means woman completes and complements man in the sacred institution of marriage, but never competes. When God gave Adam His commandments, the woman was not present. Consequently, God conferred on Adam the responsibility of spiritual head of his marriage and family. Eve’s deception therefore, was the first failure of man to lead and take responsibility for his marriage. The first consequence of sin is manifested when Adam blames his wife for their disobedience. “Then the man said, ‘The woman whom You gave to be with me, she gave of the tree, and I ate’.” Gen 3:12. But God rejects the man’s excuse and judges Adam for not exercising his authority, disobeying God’s commandments and abdicating his headship of the marriage by heeding his wife’s instructions to sin against God.
“Then to Adam He said, ‘Because you have heeded the voice of your wife, and have eaten from the tree of which I commanded you, saying, ‘You shall not eat of it. Cursed is the ground for your sake; in toil you shall eat of it, all the days of your life’.” Gen 3:17.

Men and women are equal
Men and women were created equal in the sight of God but with distinct differences and complementary responsibilities in marriage, the family and the Church. The New Testament re-establishes God’s purpose for men and women in marriage and the family. “Wives submit to your own husbands as to the Lord. For the husband is the head of the wife, as also Christ is Head of the Church; and He is the Saviour of the body…Husbands love your wives, just as Christ loved the Church and gave Himself for her.” Eph 5:22–25.

Following Christ’s example
Regardless of how many ways we attempt to interpret this Scripture, the commandment is clear and unambiguous – wives must submit to their own husbands. Significantly, the Bible points to Christ as the example both in understanding the husband’s headship of the wife and the husbands love for the wife. The Bible instructs husbands to love their wives, just as Christ loved the Church.
And how did He do this? By giving His life for the Church. The question is, “How many women will struggle to submit to their husbands if their husbands loved them like Christ loved the Church?” Much of the woman’s resistance to submit to her husband stems from the husband’s failure to love her “as Christ loved the Church.”
Interestingly, husbands are repeatedly commanded in Scripture to love their wives. But nowhere in the Bible are wives commanded to love their husbands.
The reason for this is that women are wired to instinctively respond to the love and attention of their husbands. As a result, God does not have to command what comes naturally to women. The extent and degree to which a man enjoys the love of his wife is directly proportional to the love and attention he lavishes on her.

The Scriptural role of men
The Scriptures instruct fathers to raise their children in the ways of the Lord. “And you fathers, do not provoke your children to wrath, but bring them up in the training and admonition of the Lord.” Eph 6:4. The Bible places ultimate responsibility on the man for the spiritual, emotional and physical wellbeing of his marriage and family. Every individual is accountable to God for their own actions. As a result, nobody answers to God on your behalf. But God has clearly ordained the man to fulfil the roles of prophet, priest and king in the context of marriage and the family. In his prophetic role the man is required to speak the Word of God into the lives of his wife and children.

It’s about servant leadership
The priestly role designates the man’s responsibility to pray and intercede for his family. And the role of the king compels the man to govern righteously in all matters concerning his marriage and family. The man’s headship of his marriage and family was never intended to be dictatorial. His primary example of headship is Jesus Christ. That is why men are commanded to love their wives as Christ loved the Church. The man is instructed by Scripture to follow Jesus’ example of servant leadership. Consequently, the man’s headship of his family is a position of sacrificial service to his wife and children. The Christian husband and father therefore never puts his desires above his family’s needs. He lays down his life for them just as Jesus laid down His life for us.

The divine blueprint works
No man that loves his wife as Christ loves the Church would ask her to sin. And no woman is commanded by Scripture to violate her conscience and sin against God as an act of submission to her husband. Submission in the Biblical context speaks of Divine authority and order and never dominance of one over the other.
Christ is the Head of His Church under the authority of the Father. Man is the head of his marriage and family under the authority of Christ. This Divine blueprint ensures the orderly governance and protection of the family and society. The erosion of the principles of this Divine order is tragically apparent in contemporary society.

Consequences of absent fathers
Men are increasingly abdicating their God given roles in their families. As a result, women have relinquished their important roles in the family and had to take on certain responsibilities that prove to be detrimental in the long run. Divorce has skyrocketed and families are breaking down at an alarming rate. Divorce has wreaked havoc in society and has contributed significantly to the psychological and emotional dysfunction in the lives of millions of young people. Fatherless homes have become the number one contributor to a host of social ills. As men abdicate their family responsibilities, the burden is passed on to society, leading to ballooning welfare budgets. The spiralling rates of crime, violence and sexual immorality are mainly a consequence of absent fathers.
In response to the failure of men, women have attempted to adopt the dual roles of mom and dad. In order to eradicate the Biblical notion of the man’s headship of the family, feminists advocate for ‘gender equality’ by competing with men. The liberated woman has multiple sexual partners, abandons her maternal instincts by aborting her unborn babies and pursues personal ambition at the expense of family.

Sin causes inequality
The soaring abortion statistics and the millions of single parent families bear grim testimony to the tragic social consequences of this deception. Abortion is, was and always will be a sin issue. Women abort their unborn girl babies in India because they prefer sons. The one child policy in China is a method of population control. Women in European nations and the US abort their unborn babies mainly for convenience.
Abortion in South Africa has become a form of tax-funded contraception. The majority of babies murdered through abortion have little to do with gender inequality and a lot to do with mankind’s rebellion against God. Sin causes inequality – not Biblical teaching.

Women have a vital role to play
The gifting and anointing of women to lead and preach within the Body is clearly apparent. However, as with men, women preachers are to be accountable and under authority as laid out in the Word. God is using these women to impact millions of lives especially in contexts and countries (like India, China, Mozambique, etc) where there is lacking male leadership or a great need.

We need Biblical teaching
The tragic increase of single parent families and the catastrophic social consequences of absent fathers prove that God’s original design for the family is the only model that works. God’s commandments are absolute. There is no room for negotiation. We either obey God’s order and principles for the family, or we choose to adopt the world’s standards, with devastating results.
The only way to ensure peace, harmony and stability in marriage and the family is to return to the Bible and actively work to restore God’s Divine blueprint for these sacred institutions.