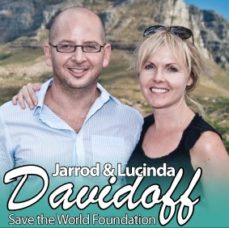 Jarrod Davidoff had never heard about Jesus when he was in high school. As a young Jewish boy, his adolescent years were a very dark and sad time, followed by military duty, where he had never felt lonelier, until one day an Afrikaans soldier came to sit next to him and had the courage to share the Gospel with him.

A young Jewish man set free!
Moved by what he had heard, Jarrod’s started wondering if Jesus could be the Messiah he had read about those many years ago in synagogue. Soon after this incident, three other Jewish believers started sharing the Gospel with Jarrod. They showed him the Messianic prophecies in the Torah and Tanakh (Old Testament) proving that Jesus was the Saviour. A friend from school, Phillip, invited him to a home cell meeting where Jarrod accepted Jesus as his Saviour. That day, having encountered the power of God, Jarrod knew he would never be the same again. “The most amazing thing happened when I accepted Jesus, I felt a weight lift off my shoulders and an amazing peace flood my heart and soul.“

Unhappy family members…
Not everyone in his family was pleased about Jarrod becoming a Christian. His uncle, who had been like a father to him after his dad died, had a Rabbi interrogate him and try to convince him that he had been brainwashed. This continued for a couple of weeks, but Jarrod withstood the pressure. After failing to discredit his nephew’s new belief in Jesus, his uncle forbade Jarrod to attend family functions.

A call to evangelism
This did not deter the excitable young man, and Jarrod immediately began telling friends, family and strangers about Jesus. He had been studying business at the time of being converted and was preparing to enter the corporate world. But after his encounter with God, Jarrod commenced a two year Bible College degree and began preparing for ministry.
Some time after this, in a church service, the Lord showed Jarrod a vision where he was preaching the Gospel on stage to a great multitude of people. “He spoke to me, sharing that He had called me to be an evangelist. The Lord said, ‘Where your treasure is there will your heart be too. Now  buy a sound system preach the Gospel in the inner city’ “
Deeply impacted, Jarrod took his lifesavings, bought a sound system and started preaching every Saturday from 1997 to 2000 in downtown JHB.
Saving the youth, one school
at a time!
In 2001 Jarrod established the ‘Save the World Foundation’ (STWF), with outreaches in schools as its primary focus. The ministry  has two teams who visit one school a day in Southern Africa and one more team that has just begun visiting schools in Los Angeles, America. Jarrod is passionate about reaching the next generation and through the Lord’s direction, implemented a multi-pronged approach to evangelism.
“When the teams visit a city, our aim is to preach the Gospel in every school there. This can take from three to six months and sometimes a year or two, depending on the number of schools. All the campaigns are pre-booked and are conducted by either myself or one of our STWF School Outreach teams. We preach to the student body in assembly time, teach students spiritual growth lessons in their classrooms and have trained volunteers from local churches who counsel students individually throughout the day.
Before outreaches, we meet with pastors in the area and invite them to “adopt” a school for follow up and discipleship purpose. Through this method, thousands of youth have come to Jesus and have been discipled by their local churches.

Bringing the elderly to salvation
During school holidays, the teams visit Old Age Homes, and share the Gospel with the elderly. On arrival they usually spend an hour going from room to room, inviting the folk to an outreach. Despite what most of us think, some of the aged folk are not always open to the Gospel. According to Jarrod, “some are a little hard hearted, but with love and encouragement, most end up responding to the message with eagerness and receive Jesus as their Lord and Saviour. “
Jarrod, who has a heart for the elderly is always astonished at the result. “I shudder to think that many of them would not have gone to Heaven had we not reached them. We therefore encourage churches to reach out to the old age homes in their community, to share Jesus with them, love them and honour them. It is such a ripe harvest field.”

Blessed!
Jarrod once preached in a Jewish old age home in Cape Town, where as a result nearly 60 elderly people gave their lives to Christ. It was truly a memorable occasion for him and the team.

The Lord opens the doors
All the funding for the outreaches comes from generous partners, friends and strangers who hear about what the ministry is doing through word of mouth and on television and in magazines. Jarrod is always in awe of the manner in which God opens doors for Save the World Foundation. “We have seen unprecedented favour to preach the Gospel in public schools in cities and are so grateful for the Lord who provides for our needs through various means.“

Working behind the scenes
Behind the scenes, there is a dynamic administration team in the ministry’s Johannesburg head office  who assist with the co-ordination of school outreaches, project administration and financial management. Jarrod has complete confidence in his team and knows he could fulfil the Lord’s call without their help – especially the financial director who happens to be his wife, Lucinda! For many years Jarrod was alone in the ministry, but God had the perfect helper in mind, and even brought the pair together in a unique way.
Lucinda recounts the meeting, “I was working and living in London at the time and my brother, Bert called me up and asked me if he could give my e-mail address to an evangelist friend of his. At first I was a little hesitant as I didn’t think that meeting someone through email was going to be too successful, but I agreed reluctantly and even started praying into our friendship.”

A powerful partnership
“When I came to South Africa later that year to visit my family, Jarrod and I met up for dinner and instantly became good friends. It was just a ‘God-connection’. We stayed friends for a few years, two of which I was still in London. When I returned to SA, we continued our friendship and a year later we started courting. Within eight months Jarrod proposed and in August 2010 we married. “ Today Lucinda oversees important aspects of the ministry and attends some outreaches with Jarrod, helping to counsel young girls. The couple have temporarily relocated to LA to pioneer an office and school office outreach team.
Save the World Foundation recently partnered with the ‘Fellowship of Christian Athletes’ who have established Bible clubs in about 120 schools. The Christian students running these Bible clubs have the right to invite STWF to their school campuses to have outreaches during their 30 minute lunch time breaks in the school auditoriums and classrooms. It has been a move of unmerited favour for STWF. “The past six public school outreaches have seen about 700 students making a decision for Jesus, each receiving a salvation pack with one of Jarrod’s salvation DVD messages, CD messages, a Bible and salvation booklet and a contact detail form so that they can be followed up.”
The couple try to get back to SA as often as possible, as outreaches still run constantly over here, but LA is keeping them busy. At present Save the World have about 50 public LA/Orange County school outreaches booked for the next six months.

Making a difference overseas
Being based in the film-making and media hub of the world, Jarrod believes one of the results of thousands of school children being saved will be the long-term transformation of the media. “The Lord has called us to convert the future media and entertainment influences to Jesus, who in turn will influence the world with the Gospel.
We are committed to the call and know that time is limited. Statistics have shown that children who come to Christ under 18 years of age have a 75% greater chance of remaining committed Christians, compared to adults who get saved later on in life.”
The challenges of evangelism are many, but they press on
Pioneering a work for the Lord in new cities and starting up projects that the Lord has laid on their hearts requires a great deal of faith. Initially, the team are without the support of a congregation or friends in new cities and are dependent solely on the Lord as their source of provision, comfort and friendship. But Jarrod, Lucinda and the team face these daunting tasks and times with an unshakable belief in God’s faithfulness. “I find in those times that we grow the most in maturity and our trust relationship with the Father. We have learnt to persevere, to really seek His face and have never been disappointed.”

Training evangelists to fulfil the Great Commission
This month, Save the World Foundation launch their Evangelism Training School on the 23rd of January 2012 in South Africa. The aim is to train and equip evangelists, soul winners and youth workers to lead hundreds, thousands and millions of people to Jesus.  The training will be focussed on daily practical evangelism outreaches in the schools from 7-12am followed by evangelism training and lectures from 2 – 4pm daily. Students have the option of taking part in this training for three months, six months or a year.

Equipping future generations
Jarrod has always had a Kingdom vision and thus the school is open for people from all denominations and backgrounds. “We encourage all future and potential evangelists to attend the school and get equipped to learn how to function as an evangelist. Youth pastors, ministers, leaders and current evangelists are welcome to attend short term training and learn new skills and tools for effective outreach.”