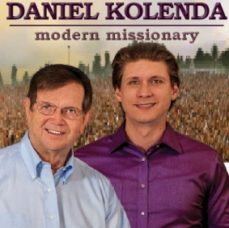 Daniel Kolenda was just a young boy when the dream of  preaching the Good News of the Gospel flooded his heart. Several years later, after serving faithfully under the mighty ministry of possibly the greatest evangelist of our time, Reinhard Bonnke, Daniel finds himself at the helm of this international ministry.
In the 40 years that Christ for All Nations has been running, over 60 million souls have been saved, and hundreds upon thousands healed.
Daniel spoke to us about where He believes God is leading them in 2014….
Q. How has life changed since taking over the reins of CfAN last year?
A. The challenges remain the same in essence, but everything has become a bit more intense and my time has become a lot more precious. Through it all though, I have found that God supplies the perfect measure of grace to meet every demand in every season.
Q.What is the greatest lesson Reinhard Bonnke has taught you in the nine years working together?
A.The most significant lessons I’ve learned from Evangelist Bonnke have come from observing his life lived. The one lesson that has impacted me most, is ‘obedience.’ From watching him, I have learned the importance of radical, unconditional, immediate and wholehearted obedience to the Voice of the Holy Spirit. Obedience unlocks Heaven’s provision and releases the blessings of God.
Likewise, disobedience has the power to abort God’s perfect will in a person’s life and rob them of peace and blessing.
Q.What does an average day in your life look like?
A.There are a few things that are characteristic of my days. I love to spend time with Jesus and spend time in His Word – this is the priority in life. I also love to write, spend time with my family, and I enjoy going to the gym.
I am often travelling and do a lot of preaching (sometimes up to 15 times in a week). I do a lot of administrative work (overseeing ten international offices and sitting on more than twenty boards of directors for ministries). I rarely have two days that are the same!

Q.You are the father of four, how often are you away from home?
A.I spend, on average, more than two weeks per month on the road and unfortunately my family does not get to travel with me as often as I would like.
I am blessed however to have a family that shares the burden for the lost, the calling to evangelism and the grace that God gives with His call. When we are together, we make an extra effort to invest quality time in each other, even when we don’t have large quantities of time. I can honestly say that my family doesn’t just “cope”  – we love our life serving Jesus and we wouldn’t trade it!

Q. 2013 was a busy year for the ministry. What are some highlights?
A. Last year we held major evangelistic Crusades in Ivory Coast, Kenya, Tanzania, Ghana, Slovakia, and United States in addition to Fire Conferences and many other events all over the world. Our final crusade for the year was in Cameroon and already we have seen more than 1-million people make decisions for Christ in 2013 alone!
These individuals have been entered into the follow up system (which utilises sophisticated technological tools) where the churches will work to assimilate them into their local congregations.
In Tanzania, one of the local pastors picked me up to take me to the final meeting of the crusade; he was overflowing with joy and proceeded to tell me that in their morning service, they had counted over 3 900 new converts in his church who had come from the crusade! This is what I love to hear because Jesus sent us to make disciples, not just converts.

Q.I love reading your reports of the miracles and salvation stories…
A.When it comes to miracles, I never need to think back very far to recall a notable story. Just a couple of weeks ago something happened in Accra, Ghana that was remarkable. A Muslim man who was travelling through town on his way to another city missed his connecting train and decided to go for a walk to the city centre (where our crusade was being held).
He had been deaf in both ears for a couple of years; he did not know there was a Gospel Crusade going on; he was not looking to be healed and he could not even hear what was being said. But suddenly his ears opened and he was totally healed!
He stood before me on the platform, trembling, overcome with emotion. He had a look of shock on his face. “My name is Mohammed,” he said, and then proceeded to share his story.
I asked him if he knew who had healed him and he said,  “The messenger of the Almighty God…Jesus is…He is a God,” he said, as though the thought had just occurred to him. He said, “the Qu’ran says if you do not believe in Christ you are not a good Muslim.” He seemed to be trying to justify this to himself. But I wanted to make it clear for the thousands watching this unfold – “Jesus is not just a messenger,” I said, “He is the Son of the living God. He is the Way, the Truth and the Life…”
By the end of our conversation, he seemed to be settled and completely sure, but he desperately wanted to get the message to his wife. So he announced the name of the city where he lives and said “If anybody knows me…tell my wife, Jesus is the Son of God!” I wish you could have seen the crowd.
No football team has ever received such enthusiasm – they were jumping and dancing and shouting with joy unspeakable and full of glory. It is a moment I will never forget!

Q.Share some of the ministry’s challenges…
A.The challenges for us are mostly financial. Even now we trust the Lord to provide for our next crusade, for which we do not yet have the finance. It’s an ongoing struggle, but the salvation of millions of souls is worth every challenge.

Q. A lot of the work you do is in African countries that have a strong Muslim presence. Is there a great danger to you and the team?
A.When it comes to Muslims, we have found most of them to be gentle, peace-loving people. They are so precious to Jesus. We don’t insult them and we don’t attack Islam. Rather, we preach Christ, whose love does not discriminate against anyone.
Also, we don’t intentionally step into fire – we avoid situations where our presence would be inflammatory and strive to keep the peace as much as possible. Having said that, we are very much aware that there is an inherent risk to what we do. We have sometimes received threats and most in our team have literally put their lives on the line at some point for the sake of the Gospel. We don’t talk about it much – we just get on with the work. We’ve decided that the reward is worth the risk, so we press forward with joy and trust in Jesus.

Q. It appears the West is becoming increasingly more ‘anti-Christian’. How does CfaN minister differently in Western countries than to African ones?

A. We don’t. We minister in Western countries exactly the same as we do in Africa. We preach the Gospel with boldness and demonstrate the Kingdom with signs and wonders. This is what God has called us to do and we have found that it works everywhere – not just in Africa.

Q. Why do you think there are so many signs and wonders at CfAN crusades, yet believers in the West rarely see them in their midst?
A..Jesus said, “These signs shall follow them that believe…” I am convinced that salvations, signs, wonders and miracles will be the norm in any community where believers genuinely expect and pray for them with faith in Jesus.
For believers who never see these things, my advice to you would be to step out in faith and do something risky. Drop the notion that these things only happen in other places or other times in history. Believe for the supernatural here and now.
Realise that it has nothing to do with you, your spiritual credentials or personal holiness.  It’s all about Jesus. Don’t take credit or blame – just trust and obey. Never base your theology on experience, but only on the Word.

Q.What awaits CfaN in 2014?
A.We will be holding Crusades, Fire Conferences, Schools of Evangelism, in Africa, Asia, Europe and North America. I am excited to be coming to South Africa for a Fire Conference from 21 – 22 March with Todd White at the African Dream Family Church in Edenglen, Edenvale, Gauteng. I believe this event is going to be a historic landmark in the nation. You can find out more information by going to: www.fire2014.org

Q.Finally, Daniel if you could give one message to the Body of Christ…
A.The greatest message of all time is the message that Jesus taught – the Gospel of the Kingdom. It is the Good News that the rule of God has come and is coming on the earth. Jesus taught the Good News of the Kingdom and then He demonstrated it – the sick were healed, the lepers were cleansed, the dead were raised and demons were exorcised.
A Kingdom is the realm wherein a king’s authority is recognised and obeyed. Thus the Kingdom of Heaven is present wherever there is submission to the Will of God and the result is that Heavenly realities manifest in the natural world.
We as believers were not just saved to become polished, decorative “nick-knacks” sitting on God’s shelf, filling space in Heaven for eternity. We were saved to become active annexations of the Kingdom – portals through which the “powers of the world to come” are able to break into this present age.
This is our calling and privilege as sons of God. Everything that I teach and preach to believers is intended to ultimately contribute to the process of bringing them into a place of becoming “Kingdom” people. 

To support the ministry, or for more info please see www.cfan.org.za