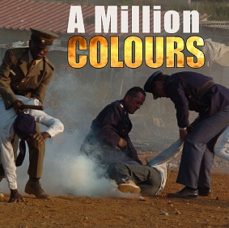 Very rarely does a film move you so deeply that weeks after viewing it, your heart is pierced with compassion and you find yourself replaying scenes from the movie over and over in your mind. When the editor and myself had the privilege of attending a pre-screening for ‘A Million Colours’ recently, we sat in the theatre after the film finished in total silence. Overwhelmed, impacted, in awe. We knew then that JOY! had to do a story on the film and mobilise as many people as possible to see the movie and spread the word. ‘A Million Colours’ is going to be hallmarked as a movie for this generation and is a film that every South African and foreigner needs to see.

So much more than a movie…
Essentially this movie charts the real-life journey of Muntu Ndebele and Norman Knox, child stars of e’Lollipop – one of the most successful movies in South African history that achieved international accolades and fostered racial reconciliation in the 80s, despite its release under the Apartheid regime. Right from the opening scene, ‘A Million Colours’ takes the viewer straight to the past and transports you back to a time of terrible turmoil. A time, that many older folk today would either choose to forget, or younger audiences would fail to remember. Centring around the life of Muntu, the movie includes a host of other characters – each authentically portrayed through excellent cinematography and convincing performances.

The movie doesn’t only cover the political events and the circumstances of Apartheid though, but also touches on relevant themes such as ancestral worship, the African tradition of lobola, true love, gang violence and drugs. Most significantly, it offers hope, reconciliation and redemption, through Christ, making it one of the most compelling movies I have ever seen.

Inspired by true events
The screenplay took seven years to make and had over 21 rewrites. ‘A Million Colours’ is of international quality and can proudly stand side by side next to any Oscar-winning movie. In fact, it has already garnered international recognition and several industry accolades. For André Pieterse, the writer and producer of both e’Lollipop and ‘A Million Colours’, this film was an incredibly healing experience for all the cast and crew involved. It was a labour of love with a deeply personal purpose:
“Having lost contact with Muntu for more than 22 years, I decided to get in touch with Muntu’s mother, who cried as she told me that he had gone missing and dropped off the radar completely.  In fact, his sister Lindi was worried he may be dead. Burdened by a realisation that Muntu needed help, I initiated a search for him and asked Norman to assist.

Several newspapers generously donated editorial space to finding the childhood star who had been missing for more than two decades. There were no firm leads until his sister Lindi called to say that Muntu did not want to be found. With Lindi as a go-between, we eventually made contact with Muntu. We were shocked by what we found…

Because of tragic circumstances (fuelled by Apartheid and the devastating consequences of racial discrimination) Muntu had descended into a life of crime and drugs. 39-years-old and weighing a scant 42kg, he was living in a derelict flat in Hillbrow. The future looked bleak for this once very popular child star. During the emotional reunion Muntu kept repeating: “I am so sorry uncle André. I am so sorry for you to find me like this.” Norman, Muntu’s family and I decided to help; acceptance and much love was needed if he was going to survive.

During the next three years, Muntu followed a healthy diet and exercise regime. He wrote hundreds of pages, reliving his life.   He read the book “A Fresh Start” by John Chapman, over and over, embraced a new lifestyle, whilst praising God for giving him a second chance.  Reading Muntu’s writings, I realised that here was a film that should be made. We also incorporated Norman’s experiences and together their stories inspired the writing of the screenplay by our film director Peter Bishai and myself. Muntu served as an associate producer on the film and has worked for our company, Ma-Afrika Films, for eleven years. He is also a motivational speaker who visits schools, prisons and churches.”

Spread the Word
Today, ‘A Million Colours’ stands as a testament to the resilience of man and the unending grace of God. The film will do so much more than entertain; it will move older audiences toward genuine healing and reconciliation and inspire younger generations to remember the past and fight for their future – to stand for all that is good and pure and right.

Every Christian should see this movie. It reminds you why you must never give up on people and always reach out to the lost. It convicts you to keep building bridges across racial, social and societal lines. And most importantly, it moves you to worship a God who is mighty to save!

‘A Million Colours’ releases countrywide on 26 April. For block bookings for your church or to have Muntu come and speak, please email lee@ma-afrika.co.za