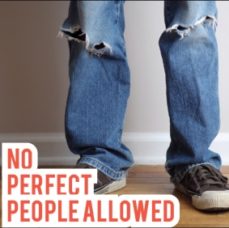 How do you introduce Jesus to spiritually sceptical people in a post-modern, post-Christian culture?
John Burke, a US Christian leader and author who has helped thousands of such people become Christ followers, will be in South Africa in May to share his unique approach to evangelism that reaches the ‘ugly and unlovely’ who most of us avoid.

Helping the church reach the world
Burke’s ‘No Perfect People’ teaching sessions (hosted by Willowcreek SA) is an opportunity for small groups and church leadership teams to consider an evangelism model which does not judge unbelievers or compromise the Gospel. The following story told by John (who pastors Gateway Community Church) illustrates this…

Learning to accept others
“Lana arrived late with a strained look on her face and the redness of her eyes immediately betraying her. Something was extremely wrong. “Brad’s not coming, he’s using again.” The words flooded from her mouth with a flow of tears as soon as she reached the safety of our small group. Inside, Lana couldn’t believe she was telling all to a church group, yet she had never found such love and acceptance.
When they first came to Gateway, Brad and Lana were seeking support. In their late twenties with two kids, it felt like they were slowly unravelling due to parenting responsibilities, job challenges, and years of drug abuse still stalking in the shadows.

Don’t be judgemental
Lana and Brad were invited to our group one Sunday by a couple they met after church and they quickly took up the invitation and joined our small group.
From the beginning, Lana wanted to make sure we understood her views. “I think all religions are equally valid,” she burst out one night. “Actually, I’m attracted by a lot of what Eastern religions have to say about peace, and I think Jesus was a good person, a life worth emulating, but I don’t know beyond that.
Frankly I don’t like religious people who judge and look down on other beliefs. That’s where I’m coming from, so I hope that’s all right with you all.” She wanted to make sure we weren’t going to judge her.
As Lana and Brad got to know the group, they soon realised this was not “your mama’s church”. The group was comprised of mostly young couples, in their twenties and thirties.

Opening up to faith
Marcy and Casey, our biker couple, typically came adorned in black. They came to Gateway in a state of spiritual pursuit. Casey was tentative and distrustful at first, but over the course of a year or so, came to faith in Christ. His mother prayed a prayer of faith with me while on her deathbed, which helped open his heart to faith.
Marcy would have called herself a Christian but did not seem to fully comprehend grace. Her Catholic upbringing gave her hope in Jesus, and she had seen Him pull her through a very traumatic childhood, but she had lived with a man before meeting Casey, and she and Casey had lived together before finally getting married.

Church in a pagan culture
I found out the hard way that living together was the norm. One Sunday, I gave a message about commitment, which I titled ‘The C-Word’ (due to our generation’s fear of commitment). In the message, I talked about living together before marriage, explaining that although it seems like a prudent decision on the surface, it leads to nearly a 50% higher chance of divorce for those who do get married, because there’s no sense of commitment.
That next week I got questioned at my small group. All but one couple had lived together before marriage!

An extreme adjustment
Some group members had skeletons of drug abuse in their past. Jay and Arden were both managers with good careers, but Jay still had a ten-year probation for possession with the intent to sell lurking in his past. Jay felt the grip of addiction squeezing tight. Sceptical about church and unsure of what they believed, Jay and Arden were seeking spiritual support for their battles but had been turned off by more traditional churches.
Four years later, Jay and Arden wholeheartedly follow Christ, lead a small group, and help out with our recovery ministry.

Missional Christianity
Daryl and Brianna were the only couple who arrived ‘churched’. They represented a bold new genre of missional Christians who are not content to play church by just huddling up with Christians.
They wanted to be in a place where real, worldly people, with messy lives, were seeing the real God in action. But, they represent a minority of churched Christians who, like the Apostle Paul, willingly venture out of their comfort zone into the pagan culture of Corinth [or Cape Town].

All things to all people
Many churched Christians who came through the doors of Gateway in the early days just could not handle the discomfort of having so many seekers around them.
They would hang out in the lobby after the service, strike up conversation, and slowly realise that the person they were talking to held none of their ‘sacred beliefs’ regarding abortion, sex before marriage, evolution, or other hot-topics of Christian subcultures. After a conversation like that, they usually scared each other off.

Love your neighbour
Don’t get me wrong, I am not advocating throwing in the moral towel, but why expect a secular society to act like a Christian one?
According to Jesus, loving God comes first – followed closely by loving people. But it takes a new kind of Christian to live and minister in the mess of society and that is precisely where we now live!”