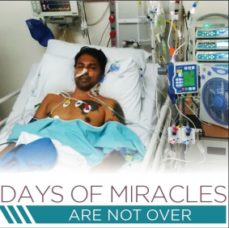 It gives me immense pleasure to be able to share with you the divine healing testimony of God’s miraculous power over my husband’s life. We reside in a town called Stanger, on the North Coast of KwaZulu Natal.

Our nightmare began on the night of 24th April 2015. My husband, Sathiah Shanmagum (known to all as Sparie), started experiencing severe abdominal pains. Brushing it off as being a flu bug, he had taken pain medication and said he would go to the doctor in the morning. As the night progressed the pains became unbearable. This continued until 5am, morning of 25th April 2015. Unable to see him in this pain, I immediately drove him to the nearest private hospital, Alberlito Hospital in Ballito. Throughout the journey he screamed with pain unable to make the journey with ease.

On entry to the casualty department, numerous tests were being done on him. The attending doctor was very thorough in her examination and all they could do was administer pain medication until the various blood results come in. As soon as the blood results were in, the doctor approached us and said, “Mr Shanmagum, you have a condition called Pancreatitis.” I stood there dumbfounded, as that was the first time I had ever heard of such a condition, let alone pronounce it.


FOR THE REST OF THIS AMAZING STORY, PICK UP A COPY OF OUR OCTOBER ISSUE, IN STORES NOW!