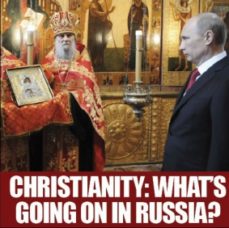 Is Religious Freedom at Risk?

Could this legislation result in harassing Bible-believing Christians in Russia? That remains to be seen. When some media have alleged that religious freedom is at risk in Russia, they are playing games with words. Russians see Faith as inherently public and political. The worldview of Russian Orthodoxy is holistic and organic. They do not recognise the sharp divisions between church and state that secular societies, such as the US, demand. The Russian Orthodox Church is looked to by Russians for their meaning and purpose in life. Russia has returned to the principle of symphonia, or institutionalised harmonious relations between the Russian Orthodox Church and the Russian state. The Orthodox Church enjoys privileges of political preference and is respected as the protector of Russia’s national identity and faith.
…FOR THE REST OF THIS ARTICLE, PLEASE SEE OUR OCTOBER ISSUE OF JOY!