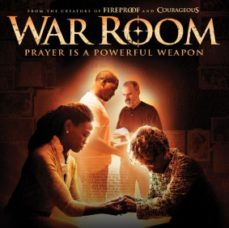 Prayer outshines anything! In the context of a vibrant relationship with God, whatever the problem or need, it can powerfully change our lives.” That rock-­solid belief in prayer’s muscle and necessity is a foundation laid in film-makers and brothers, Alex and Stephen Kendrick’s earliest years. “Growing up with a praying mom and dad, we saw the Lord at work. And we slowly begin to build and go into our own  prayer closets.” This habit and commitment, the Kendricks say, is the secret to their films’ remarkable impact.
In each of the Kendricks’ four previous films: FlyWheel, Facing The Giants, Fireproof and Courageous, prayer preceded everything. Before an actor is cast or a scene is shot, a team of believers prays over every aspect.
It was through the preproduction prayer on War Room, in 2013, that Stephen and Alex felt called to focus their next film on the power of prayer. “We didn’t wake up one day wanting to make a movie about a 75 year old woman’s prayer closet,” Stephen said. “We asked God to order our steps and the ideas came. As filmmakers, we’re laying tracks before a moving train.”
Do you plan to pray?
The release of this film could not have come at a better time – the world is rife with persecution, we are seeing evil spread throughout the nations and the crumbling of values. Christian families, churches and godly morals are under attack and it is time that people plan to pray and use prayer as the weapon it was intended to be.
Alex expresses the message behind the film: “People have plans for everything in life: careers, finances, health. But what about a strategy for prayer to affect our lives, our spouses and our children? We want to inspire, challenge and motivate families to not just react but plan through the right kind of battles – and to use the best resources possible.” For every aspect of life, War Room is about fighting the good fight and relying on the right resources.
Losing focus
In the film, Tony and Elizabeth Jordan have it all – great jobs, a beautiful daughter and their dream house. But appearances can be deceiving. Tony and Elizabeth Jordans’ world is actually crumbling under the strain of a failing marriage. While Tony basks in his professional success and flirts with temptation, Elizabeth resigns herself to increasing bitterness.
Their lives take an unexpected turn when Elizabeth meets her newest client, Miss Clara, and is challenged to establish a ‘war room’ and a battle plan of prayer for her family. As Elizabeth tries to fight for her family, Tony’s hidden struggles come to light. As the head of the home, he must decide if he will make amends to his family and prove Miss Clara’s wisdom that victories don’t come by accident.
A committed Christian cast
The all-Christian cast includes one person known worldwide for her dynamic speaking and in-depth Bible teaching – Priscilla Shirer. She now takes on an exciting new role as lead actress, playing Elizabeth Jordan. But for Shirer, it’s about much more than screen time. “I’m honoured to work alongside the Kendricks to encourage people to pray,” she said. “For unlocking the activity of Heaven on earth, prayer is the church’s single most powerful weapon.”
The Kendricks’ latest movie also features T.C. Stallings (Courageous) playing Tony Jordan; Alex Kendrick (Mom’s Night Out, Courageous) as Coleman Young; and veteran actress Karen Abercrombie (My Name Is Paul, Mountain Top) as Miss Clara. The newcomers to film are standup comedian Michael Jr. as Michael and Alena Pitts as Danielle. Renowned speaker Beth Moore also has her first acting role as Mandy.
“It’s time for fierceness in prayer, and I cannot think of a more crucial message for a movie to convey,” Moore said. “God waits to see a generation that will take Him at His Word. Let’s be that generation.”
A powerful weapon
When it comes to making an impact on your world, do you believe prayer is a powerful weapon? Prayer, at its heart, is communicating with God. It is directly interacting with the magnificent Creator of the universe.
The power of prayer is the power of demolishing strongholds. When you don’t know what or how to pray, the Holy Spirit “intercedes for us” and He “helps us in our weaknesses” Romans 8:26. Isn’t that incredible? We do not need to worry about the future, because God is the one who holds it. We need to see worry as an indication that it is time to pray. “Do not be anxious about anything, but in every situation, by prayer and petition, with thanksgiving, present your requests to God.” Phil 4:6.  

The child displays an inappropriate knowledge of sex
The child’s behaviour changes (suddenly becomes moody, aggressive or withdrawn)
There is physical evidence – blood in the underwear
The child avoids a family member or friend
The child’s self-esteem is low
The child misses school
The child starts bed-wetting
Adult displays grooming behaviour towards child
Child acts out sexually with toys
If there is physical evidence which may include complaints about pain, discharge or bleeding in the private areas, parents should seek medical attention immediately.

Pray for your child’s protection
In summation, a parent’s perception of inappropriate sexual knowledge may be grouped into three categories: lack of knowledge of developmentally appropriate sexual behaviour, a child’s modelling of behaviour they have observed on television, the internet or in adults around them and finally the possibility of molestation or abuse.
If you continue to feel concerned in any way please contact a professional. You can call us at ICP on 011 827 7611. 

Estelle Zietkiewicz is a Counselling Psychologist and part time lecturer at the ICP. For counselling or enquiries about studies in Christian Psychology call 011 827 7611.