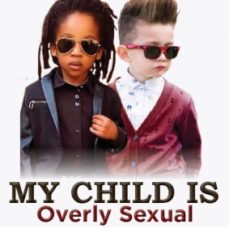 The child displays an inappropriate knowledge of sex
The child’s behaviour changes (suddenly becomes moody, aggressive or withdrawn)
There is physical evidence – blood in the underwear
The child avoids a family member or friend
The child’s self-esteem is low
The child misses school
The child starts bed-wetting
Adult displays grooming behaviour towards child
Child acts out sexually with toys
If there is physical evidence which may include complaints about pain, discharge or bleeding in the private areas, parents should seek medical attention immediately.

Pray for your child’s protection
In summation, a parent’s perception of inappropriate sexual knowledge may be grouped into three categories: lack of knowledge of developmentally appropriate sexual behaviour, a child’s modelling of behaviour they have observed on television, the internet or in adults around them and finally the possibility of molestation or abuse.
If you continue to feel concerned in any way please contact a professional. You can call us at ICP on 011 827 7611. 

Estelle Zietkiewicz is a Counselling Psychologist and part time lecturer at the ICP. For counselling or enquiries about studies in Christian Psychology call 011 827 7611.