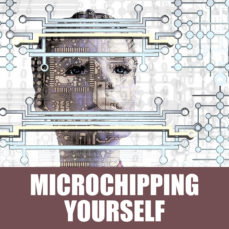 The future is coming, and it is going to look very strange. In the past, many authors had raised the possibility of tyrannical governments forcibly microchipping their own populations someday, but what if most of humanity actually embraces this new technology enthusiastically?
Today, thousands of people in Sweden are eagerly having microchips inserted into their own hands, and it is rapidly becoming a natural part of society. At one time there was great resistance to the idea of microchipping our pets, but now it is almost universally accepted. Personal microchips are being promoted as a way to make routine tasks faster, easier, and more convenient, and Swedish “biohackers” are quite thrilled to be on the cutting edge of this new trend:
…For the full article, pick up a copy of the August issue of JOY!, on sale nationwide.

Denzel Washington is best known for his impressive acting skills and his award winning movies that he directs and produces, but did you know that this loved celebrity is a fervent believer, and is utterly sold-out for Jesus?
“I pray that you put your slippers way under your bed at night, so that when you wake in the morning you have to start on your knees to find them. And while you’re down there, say ‘thank you.’”
…For the full article, pick up a copy of the August issue of JOY!, on sale nationwide.

Regardless of what you think of the agreement that was signed by Kim and Trump on June 12 in Singapore, there is cause for genuine celebration. Yes, the details were fuzzy. Yes, there were a lot of ‘what ifs’ and ‘maybes’. But if we step back and study how strange North Korea is, and how backwards and barbaric, we would realise that we are witnessing a historic breakthrough. Consider these bizarre facts about this nation of 25 million:
Did you know? Christians in North Korea have been crushed by steamrollers and roasted over fires. Officially, North Korea is a necrocracy – a government led by a dead man. There are 34 000 statues of the late Kim II Sung in the country. In North Korea, it is not 2018. Kim Jong Un’s loyal subjects believe he can control the weather.
…For the full article, pick up a copy of the August issue of JOY!, on sale nationwide.

Mogoeng Thomas Reetsang Mogoeng is the current Chief Justice of South Africa. He holds an important role in the landscape of South African politics, and is bringing Godly values back into government.
He is a man who is fiercely committed to our country’s constitution, upholding the law, and is sold out for Jesus! He has been in office for 7 years, and has garnered a significant admiration and respect from South Africans.
…For the full article, pick up a copy of the August issue of JOY!, on sale nationwide.