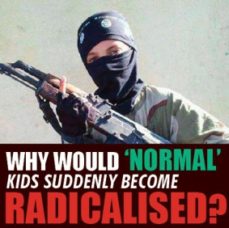 Earlier this year, South Africans were shocked by the news that a fifteen-year old girl was taken off a flight in Cape Town after evidence had been found that she was in contact with ISIS recruiters. The investigation of this case made it clear that ISIS has an active recruitment network in South Africa appealing to young people to join this extremist militant group.
It further indicates the vulnerability of South African youth and the responsibility of parents and other authorities to monitor the behaviour of teenagers. It signals the urgent need to understand why teenagers become politically radicalised and how to prevent it.
Terrorist groups target teenagers
[According to the US ministry of Foreign Affairs, “the exploitation of children by terrorist groups is not new, but groups such as ISIS, Boko Haram, and the Pakistani Taliban are increasingly using children to carry out their activities. The move is strategic as it is shocking. It provides heightened media attention and allows terrorist groups to groom more loyal members. Children are easier to indoctrinate and less likely to resist, since they do not yet fully understand their own mortality.
Moreover, because children appear less suspicious, using them often leads to more successful missions. On the other hand, the use of children and teenagers may also indicate that the group is having difficulty in recruiting adults – the fact that Boko Haram has kidnapped children to use them as suicide bombers may be an indication of the group’s weakness, not its strength.”]
Capitalising on internal anger
Radicalisation could be defined as the progression of searching and nurturing an extreme belief system until it becomes a dominant factor in one’s life that inspires and drives terrorist acts. Interest in an extreme belief system as a way of expressing internal anger or hurt provides a starting point for being lured into an extremist militant group. The brainwashing that takes place in the militant group would nurture and shape the initial interest to progress into full-blown radicalism.
The choice to join a militant political group is based in ideological and psychological processes and often linked to socio-economic situations. Militant political groups have political aims as well as social ones. These aims attract young people looking for answers about life. Youth struggling to find and develop their own identities and searching for a group to which they can belong are receptive to alternative solutions. Teenagers are specifically vulnerable because of their developmental stage. During this stage they generally have more conflict with their parents and authority figures and seek independence from their parents and their ideas. When teenagers have very strong issues with society and no trust in the ability of authority figures to solve their problems, they become potentially easy targets for militant groups.
A desire to control and execute justice
Militant political groups take the law into their own hands because they don’t trust the state’s justice system or they believe that the state is treating a certain group unfairly or fail to fulfil their ideological goals.
The critical elements of ideology that could lead to radicalism include the expression of a grievance based on perceived injustice, or perceived unfair treatment, the identification of a guilty person or group responsible for the unfair treatment, the identification and planning of a method to punish the person or group and the recruitment of others to execute these plans. ISIS presents itself as a group with ideologically based moralistic motivation [Islamic] based on a sense of justice and injustice.
This group claims to be the voice of Allah as they perform a form of capital punishment when they judge and execute victims. The ability to act as the accuser, jury, judge and executioner provides a sense of power to militant political groups.
Appealing to one’s need for purpose
Research with regards to Islamic youth living in the Netherlands revealed that youth that perceive the wider authority as illegitimate (they did not acknowledge Dutch law but only the law of Allah) and believers in Allah as superior to non-believers in relation to Muslim violence. These youth often display a feeling of distance and disconnectedness to society. Feelings of personal emotional uncertainty and a tendency to violence further increase the risk to be radicalised. The call for self-sacrifice when joining a militant group appeals psychologically to teenagers with personal emotional uncertainty or low self-esteem. It provides an opportunity to restore or enhance the belief in one’s significance. Self-sacrifice for the greater cause serves to give meaning in life to a teenager searching for a reason for his existence. The greater the sacrifice, the stronger the sense of significance experienced by the teenager.

How can society prevent the escalation of militant groups?

Parents should be observant and sensitive to the developmental needs of their teenager children. Issues of justice, injustice and meaning in life should be discussed openly in the family and in schools
When a parent notices that a child becomes overly interested in political issues and extreme in his or her views, a red light should go on. Parents should monitor the child’s social media contacts and communication. Discussions around different religious and political views to increase tolerance for all people should be initiated in the home.

Pre-disposing factors that foster radicalism in teens
[In response to the rise of domestic terrorism, the US Government devised an extensive questionnaire to establish if a family is at risk of fostering radicalised teenagers. Some of the factors that could lead to radicalised behaviour and ideology include:

Poor parent-child bond and lack of empathetic connection
Minimal parental involvement in child’s education and socialisation
Limited awareness of child’s friends and movements/activities
Perceived economic stress (by the child)
Strong family connection to a specific ethnic, cultural or religious group (or very weak connection can conversely also affect a child negatively, as they have no societal or familial bond)
Social anxiety, isolation and general social dysfunction]

We need to pray for the vulnerable youth
A [Christian] value system that counters superiority, alienation and disconnectedness from society should be cultivated in youth. Parents and the community should join hands in this effort. Only when we truly learn to respect and love others can we survive as a nation.
The great commandment should guide us in this: “Teacher, which is the greatest commandment in the Law?” Jesus replied: “‘Love the Lord your God with all your heart and with all your soul and with all your mind.’ This is the first and greatest commandment. And the second is like it: ‘Love your neighbour as yourself.’ All the Law and the Prophets hang on these two commandments.” Matthew 22:36-40. 