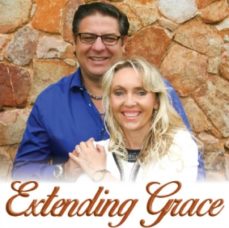 The moment you walk under the lanterned awning of the impressive stone structure, you immediately sense that Gracepoint is a homely church, a family of believers committed to faith, hope and transformative love. As you walk through the reception, which is more like an open-plan lounge, you feel welcomed into a vibrant integrated community of young and old, black and white.
As a first-time visitor, you would be forgiven for thinking that you are in a modern “Charismatic” church, as coffee baristas serve you cappuccinos and talented musos strum their guitars – and yet you sense as you walk into the auditorium (or Sanctuary as it is named), that this is a “traditional” church…with stained glass windows and Methodist praxis.

Contemporary methodists…
Led by Gary and Jacqui Rivas, Gracepoint (formerly known as Lonehill Methodist) is a contemporary church influencing the surrounding suburbs in a convincing way. From fostering transformation, to instituting social justice and advocacy, Gracepoint is growing in reach and relevance every single day. And yet – Gary and Jacqui continue to remain grounded and approachable, to lead from the front and strive to retain a relational culture within the church, even as it grows exponentially (they currently have 4 multi-site campuses across Gauteng).

Committed to the call of Christ
Married for 23 years, Gary (47) and Jacqui (45) grew up in Germiston, and both knew from a very young age that they were compelled to serve the cause of Christ. Jacqui studied law, and Gary pursued teaching, but eventually the clarion call to ministry struck, and the pair embarked on the journey of ordination within the Methodist church.
Jacqui recounts, “In the late Eighties, I was a political activist, heading to Wits to study law. As a presbyterian, saved in the Assemblies of God, I later joined Gary at Germiston Methodist Church, where we became youth pastors. That church was part of the same geographic circuit as the township of Katlehong and so we were tasked to work as youth pastors there as well. Those were
exciting times, as we were often smuggled in and dodging the Apartheid police enforcing the Group Areas Act.”

Testing the call to ministry
For the pair, ministry was not an impulsive decision and within the Methodist Church the process of ordination is extensive and extremely thorough. Explains Gary, “To become a minister, it is a seven year process, starting as a local lay preacher for two years (in which time you commence basic theology studies and various assessments critiquing your sermons). Then you “candidate” for the ministry – in our instance we pastored in Soweto, and worked in the inner city with the sex workers in Hillbrow. Following this period, you become a probationer minister and do in-service training, all the while studying. It is a lengthy and extensive process designed to test your call – so that by the time you are ordained, you know that you are truly committed. There are times in ministry that the only thing that keeps you involved is a commitment to your calling.”

Fostering unity within the Body
At a recent inter-denominational gathering of leaders, JOY! met with Gary to hear his heart for the Body of Christ, for unity amongst the brethren, and for a truly transformed nation. At the Central Methodist Synod, Gary was elected as the nominee Bishop for the Central District (which sees him with the responsibility and honour as a spiritual leader over most of Gauteng, parts of the North West Province, and as far west as Vryburg), Gary is a Pastor to the pastors and their families as well as to care for the lay people (which cumulatively numbers 80 000!).
We were struck by his humility, approachability and his magnanimity; and together with his talented wife and servant-hearted kids, we felt it expedient to profile this family and the role they are playing in furthering of the Gospel and the grace of God.
Gary, many people have a stereotype of what a “traditional” church is like, and what a “charismatic” church is like. Gracepoint is very interesting because you seem to fit within both moulds. What is the heart, culture and practice of the church?
When John Wesley formed the Methodist movement within the Anglican Church, he and his brother Charles were very contemporary. Their clothes that they wore, the places they preached in (from an old Foundry to pubs to graveyards), were all rather charismatic. The songs that Charles wrote were groundbreaking for the time (as most hymns were sung in Latin, until he composed the classics we sing today…based on pub songs!). With this in mind, Gracepoint is in fact “traditionally Methodist”. If you define a charismatic church as a Holy Spirit inspired church, then we most certainly are – we don’t know how any church cannot be inspired by the Holy Spirit.
Jacqui, you are not simply “a pastor’s wife” in ministry because of your husband. You have a law major and theology degree and are involved in the leadership of Gracepoint and even spearheaded the building project for the church…
I was privileged to graduate in the early 90s with a Law Major from Wits. I continued with my LLB studies at UNISA for a further three years and in the last month of my final year felt a deep sense of God’s call to full time ministry. As an ordained minister in the Methodist Church I am honoured to be part of a denomination that celebrates 40 years of women being ordained as generations have forged the road before me.
It was my role to lead the building project, but we had a team of phenomenal people who generously gave their skills, used their passion and committed to set and establish a place of worship that will hopefully be inspiring for generations to come. I hope to one day see old trees, beautiful labyrinths, faded jungle gyms and worn kneeling pray cushions. We long to see a healed community, a transformed society of people in prison and a restored humanity of those released. We aim to be a place of safety and a witness of love where all people feel they belong and can discover grace as their lives are transformed.

Gary, you have been involved with the “Movement of Unity” between Catholics and Evangelicals…
My work of unity actually has been primarily between all mainline churches and Evangelicals. Part of this has encompassed fostering unity and dialogue between Catholics and Protestants. The work of Church unity is incredibly difficult. Seeking that which unites us rather than what divides us takes effort.
I believe it’s a Gospel imperative that we seek ‘oneness’ amongst the Body (made up of believers and churches), according to Jesus in John 17. I believe that the biggest obstacles to church unity are the pastors and ministers themselves. Our congregation members practise Biblical unity everyday: in the workplace they sit across a desk from Catholics. At lunches, they eat with Pentecostals, Presbyterians and Methodists. Around the boardroom table, there are Anglicans and Congregationalists. My experience is that pastors, ministers and dominees generally hang around with people of their own denomination or affiliation. And yet – our Lord Jesus speaks about our witness in the world – the greatest witness of disciples who love one another and dwell in unity.

What is your response to critics who feel that because of doctrinal differences, Christians should not and cannot unite with Catholics..?
My first response is that if we should not unite with the Catholics because of doctrinal differences, then there will be absolutely no unity between ANY churches – as we all differ in doctrine. Secondly – and most importantly – we aren’t saved by our doctrine. We are saved by Jesus Christ, and what He did on the Cross for us. I am not prepared to judge anyone as to whether they are God’s child or not. Jesus was very clear when it came to judging – in Matthew 7, He calls all hypocrites who want to remove the speck out of someone else’s eye, when you have a log in your own eye. Enough of the judging. I have met enough Catholics that are born again, Holy Spirit-filled, lovers of Jesus Christ and are making a social difference to this beautiful land of ours, that I count it a privilege to be united with them in Christ. If we follow Christ and His commands, we are Christians. We are brothers and sisters in the family of God – fighting the Good Fight of Faith together.

Jacqui, how do you and Gary lead the church within denominational structures, even as (perhaps) a pressure toward liberalism plagues some traditional churches?
The Methodist Church is a Connexional Church in six countries but also allows the local church a congregational expression. We experience the Gospel across boundaries, operate at a local level, and are able to exercise quite a bit of flexibility and self-governance in most areas. Our focus is on Christ, led by the Holy Spirit, governed by the Word.

Rebekah, pastor’s kids often get a reputation for being rebellious – yet you have turned out differently. Why?
I don’t believe there is an exact formula for turning out well; there certainly is the temptation to be rebellious but you need to resist. I can clearly remember the day that I decided to follow God  for myself, and walk in His will…today I am studying Theology at the University of Pretoria and hope to become an ordained minister.

Daniel, what is your role within Gracepoint and what advice can you share with parents (in Christian leadership) on how to raise your kids so that they love the church…instead of feeling “squashed” by people’s expectations?
I help lead the Youth Ministry (Grade 8-12). I believe that my role is to show teens that Jesus isn’t outdated or irrelevant and that despite all the doubt they face, Christ still has great plans for every single one of them. If I can show at least one teenager the love and light Jesus brings into such a dark world then I can say my role is fulfilled!
My advice would be to let your child do what they love and let them incorporate that into the church. My passion is drama, I love acting and being in front of a crowd and so my parents set me free to grow my talents and not suppress them. Now I use those same talents in the church and love it. Parents, don’t make your kids feel like they have to act a certain way because they’re in church, but let them be who they are as God intended, this way no one feels “squashed” or burdened by the expectations of others.
Gary, a final word about how one can find out more about the church and also the Miracle of Unity Movement?
Please visit our website: www.gracepoint.co.za for more information on the church, our services and programmes. To get involved with the Miracle of Unity, contact me via my blog: garyrivas.com