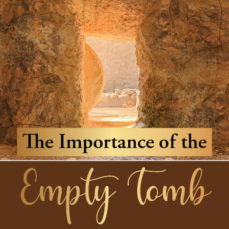 From the earliest apostolic period, the reality of the empty tomb—the biblical truth that the tomb of Jesus of Nazareth was found empty by His disciples—has been at the centre of the Christian proclamation. All four Gospels describe, to varying degrees, the circumstances surrounding the discovery of the empty tomb.

But are there any good reasons to think that these claims are historically accurate? Could a fair– minded investigator conclude that, in all probability, Jesus’ tomb was found empty on that first Easter morning? There are several arguments that have convinced a good many historians that the tomb in which Jesus was buried was indeed found empty on the Sunday following His crucifixion.