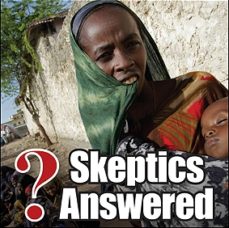 A child is born blind, deformed or mentally afflicted and the question comes: Why? The child has done no harm. A man or woman of fine character and in the prime of their life is racked with pain in a hopeless disease that can only end in death. Why him? Why her? These are the people who can at least be spared.
Millions in the world are suffering semi-starvation and disease in countries with vast populations and poor fertility. Others perish or are made homeless in floods and earthquakes. Why should they suffer?
Pain, torture and death have been imposed on helpless millions by the tyranny of man and the destructiveness of modern war. Countless lives are lost in acts of terrorism, by brutality and hijacking. Accidents have always been commonplace, but the scale of today’s disasters and natural calamities is often overwhelming: a passenger aircraft crashes; an oil rig blows up; fire traps hundreds in an underground train. People ask: Why does God allow it?

What is the cause?
The questions readily rise to mind and on the surface seem reasonable, yet a candid look at them shows that they carry certain implications. They imply that suffering in human life is inconsistent either with the power or with the love of God: that as a God of love either He has not the power to prevent the suffering, or if He has the power then He has not the will, and is not a God of love. It is assumed that the prevention of suffering of the apparently innocent, is something we should expect from a God of love who is also Almighty. Are these assumptions justified?

Facts of life
Some facts about life must be taken into account before we try to form a judgement:
1. Man lives in a universe of cause and effect and the consequences of certain choices are inescapable. Fire burns, water drowns, viruses destroy. These facts have moral implications. Men live in a universe in which the consequences of what they do are inescapable, and therefore their responsibility for what they do is equally inescapable. Without this burden of ‘natural law’ man could do as he liked with impunity, and there would be no responsibility. God made the universe this way because He is a moral God who makes men responsible beings with freewill to choose how they will act
2. Man’s neglect and misuse of his own life has corrupted the stream of human life itself, and left evils which fall on succeeding generations. These, again as part of natural law, may manifest themselves as hereditary weaknesses and tendencies to disease for generations
3. The consequences of man’s acts are not only directly physical. The social and political evils which they have created throughout history have left a growing burden on the generations following. People today are caught in a net of the consequences of past history.

Saved from ourselves?
Taking such facts as these into account, it must be asked, “What is it we are really doing when we require God to remove suffering?” Are we not asking that God should (a) suspend natural law, (b) divert the consequences of heredity, and (c) turn aside the effects of man’s inhumanity to man?
Have we the right to expect God to save men from the consequences of human acts? Would it be a moral universe if He did? These questions can only be asked of situations when the hand of man is involved. Earthquakes, tempests, famines and floods are called ‘acts of God’ because usually there is no other explanation for their occurrence. So if we look beyond human acts to natural disaster, we find that it falls upon all, innocent and guilty alike.  As soon as we begin to question the suffering of innocent victims of these disasters another dilemma is raised. Are we saying that the calamities should be selective, searching out only those who deserve to suffer?

An evil or a symptom?
The Biblical view is radically different: suffering is not evil in itself, but a symptom of a deeper evil. The Scriptures portray suffering as a consequence of sin: not necessarily the sin of the individual who suffers, but sin in the history of man and in human society. “Therefore, just as sin entered the world through one man, and death through sin, and in this way death came to all men, because all sinned.” Rom 5:12
With man’s disobedience there came a dislocation in the relationship between the Creator and the created; the relation between God and man is out of joint. Death is universal: God does not modify it for the particular individual. The Bible teaching is that men are left to their own ways and the working of natural law, though there may be times when natural disaster is divinely directed as a judgement upon man and for the cleansing of the earth. The outstanding example is the flood in the days of Noah.

A Godly man’s experience
At the same time it is true that in the Bible, for those who seek to serve God, suffering takes on new meaning: they are in a new relationship to the Creator, and will learn to see tragedy in a new light.
The answer may be seen in the example of Job. Here is a devout man who meets with disaster in the loss of his flocks and herds the source of his wealth; with terrible bereavement in the loss of all his children at one stroke; and then is stricken with a tormenting disease which separates him from men. Yet he says: “What? Shall we receive good at the hand of the Lord, and shall we not receive evil?” (Job 2:10). He recognises the important principle that he cannot claim good as a right, it is not for him to decide what God shall do.
The time comes, however, when the suffering is so unbearable that death seems preferable. In agony and bewilderment he asks, in effect: Why should a man live if it is only to suffer? Can God, who has made man, destroy him like a discarded plaything?

The agonising problem
God speaks to men (a) through revelation, and (b) through suffering. God, by His own means, is communicating with men and women and bringing them to Himself (read Job 33:14-18). Suffering can, therefore, be part of the ways of God’s working with men for their own development and to bring them to a knowledge of Himself; and the outcome for Job was a new and intimate knowledge of the Lord.
This working of God with man must in its nature be individual, only the man who suffers can gain this as a personal experience. The larger problem of suffering remains, and the only answer to be extracted from the Book of Job is that man cannot question the majesty and wisdom of God. He is the Creator and Sustainer of all life, and His works are beyond our knowledge.

Suffering is a complex issue
Only by loss and suffering could Job know that he did not serve God for the sake of houses, lands, flocks and herds, or even children. He did not even serve for the sake of his own skin, his health and wellbeing. He worshipped God for Himself, and in spite of all the wild thoughts which came from his stress of mind and body, he had an ultimate belief in God’s righteousness and faithfulness.
It was only when stripped of everything that he really knew that God was his only refuge. Job’s faith in God was put to the test under trial, and by trial it was tempered as steel. It was by his final acceptance of the wisdom of God, and by learning that faith could be developed through suffering, that Job came at last to the fuller knowledge of God.

Suffering: an expression of love?
Suffering and loss are common to man, but for the children of God they are directed by their Heavenly Father as a spiritual training, and as such are the expression of His love (Prov 3:11-12; Heb 12:9-11; Prov 20:30).
One stage more may be reached in the understanding of suffering. It is that God Himself is involved in the suffering of man, for out of His love He gave His own Son to die for them, and allowed him to suffer too. Jesus was wholly innocent, untainted by sin of any kind, yet He voluntarily laid down His life, suffering injustice and cruelty.
Greater love even God could not have than to give His beloved Son to the suffering of the cross for the redemption of man.  The God of Israel is not a remote, impassive ‘force’. His Holy Spirit can be grieved, He can be moved with yearning compassion. He can love with an everlasting love. All these are Scriptural expressions, and they reveal God as the supreme Personality who can from His holy transcendence enter into the lives of those He has created.

God gives us free will
People often ask: Why does God not intervene to stop suffering, to halt war, to prevent disease, etc.? God does, of course, intervene in human affairs, He has shown His power at many times in history. But there is a limit to this intervention: He has allowed man freewill, and He allows man to use that freewill – for good or ill. God intervened in the history of His chosen people, Israel, and gave them special opportunities to worship Him and be His witnesses. He entrusted them with His revelation and with the promises and prophecies of a coming Messiah. So it was that, nearly 2000 years ago, God intervened in the lives and history of man by giving His Son Christ Jesus to share in human suffering. Christ came in the life and nature of man. He shared our experience and endured the temptations from within and the afflictions from without that are the common lot of all mankind (Heb 2:10-18; Heb 5:8).
In accepting suffering in obedience to the Will of God, Jesus elevated it, and showed it no longer as the greatest evil but as a means to an end: for through suffering, in His perfect obedience to God, He overcame the power of sin in human nature, and so made possible resurrection from the dead to eternal life with the Father.

Perfected through suffering
Without faith in God, suffering is an evil to be endured. With faith, and the example of the Son of God, suffering may purify and ennoble, and be a means by which God brings the sufferer nearer to Himself. It can be truly a divine education, the chastening of the Lord. If God’s Son suffered, can men expect to escape? But beyond the suffering was resurrection, and beyond resurrection will come the Kingdom of God when Christ will come to reign, taking to Himself those who have already committed themselves as His followers. For those who answer the call of God’s love, the way of suffering may be the way of life, and that is the ultimate purpose of the existence of suffering in the world. The call is still going out; there is still opportunity for all who are looking for hope beyond this present evil world, to find it in the Good News of the Gospel.
Finally, we live with hope knowing that one day God will bring an end to suffering. “And God will wipe away every tear from their eyes; there shall be no more death, nor sorrow, nor crying. There shall be no more pain, for the former things have passed away.” Rev 21:4.

Note from JOY! Magazine
To a world in pain, let us share the Gospel with others, through  words and deeds. Do not forget the hurting and the lost. Pray for them, lobby governments, speak up. Give to the poor and support ministries working into war-torn/oppressive/ disaster-stricken lands. 