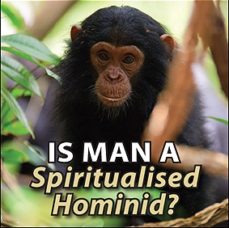 When Christians try to reconcile the Bible with evolution and its billions of years of deep time, they usually propose something along the following lines: A population of creatures called ‘hominids’ came into existence by means of evolution. In their final form, these creatures were identical to humans, except that they did not have spirits. But then God implanted spirits – either into just two of them (Adam and Eve), or into many – and we are the descendents of those ‘upgraded hominids’.
This bizarre scenario contradicts the clear teaching of Scripture1 and the real facts of science.2 In this article, however, I will confine myself to pointing out just two flaws in the theory.
First, the abilities and faculties of the human body and mind are vastly superior to those needed for survival and reproduction. For that reason (as well as many other reasons) their existence cannot be accounted for by evolution.3
Second, the abilities and faculties of the human body and mind are so clearly designed for a spiritual purpose, that their supposed existence without the spirit (for hundreds of thousands of years in various hominids) makes very little sense.
Here are some of the special abilities and faculties of the human body and mind:

1. The body
Upright posture: Unlike the apes, and all other mammals, man has a fully upright posture.4 This is completely unnecessary for survival and reproduction; but it is, I suggest, very appropriate for a being who was “made in the image of God”, and was given dominion over the whole world. First, it allows him to make full use of his hands in special ways (see below). And second, it confers on him a unique kind of dignity.

2. The hands, face and language
The human hand is unique in creation. Prof. Stuart Burgess writes, “The human hand is one of the most precise and wonderful mechanical devices in creation and vastly more impressive than any mechanical device that man has made”.5 About a quarter of the entire motor cortex in the human brain is devoted to controlling the muscles of the hand.
(The motor cortex is the part of the brain responsible for the movement of voluntary muscles). Human hands can, for example, build telescopes and microscopes to explore God’s creation, and they can construct and play musical instruments – producing the most beautiful music, and playing with incredible dexterity and virtuosity. The abilities of the human hand seem to be vastly greater than those needed for survival and reproduction;6 but they are entirely appropriate for a being who is “made in the image of God”.
The face: Humans have an amazing and unique ability to make many types of intricate facial expression. There are about 40 named muscles in the human face and they can move every part of the face with precision. No other creature can do this, and it is completely unnecessary for survival and reproduction.
But again, it is highly appropriate for a being of man’s mental and spiritual status. Another special feature of the human face is the fact that the whites of the eyes are visible. This feature greatly enhances the ability of humans to produce different kinds of facial expressions, and to interact emotionally with other humans.
Language: Human speech is unique and enormously complex.7 The language of a hunter-gatherer living in the jungle is just as complex as yours and mine – often more so. It depends on unique features of the human body’s anatomy and the human brain. Again, this faculty is unnecessary for survival and reproduction (animals manage perfectly well without it), but it is highly appropriate for a being of man’s mental and spiritual status.

3. The brain
It is said that the human brain is the most complex structure in the universe, but that is an understatement! It is stupendous and mind-boggling in its complexity.8 On a purely physical level, it contains about 100 billion neurons (brain cells, each of which is stupendously and mind-bogglingly complex), with about 100 trillion connections. We have only the vaguest notions as to how it works. We are in the territory of both the body and the mind here. Again, the abilities and faculties of man’s brain are way beyond anything required for survival and reproduction, but they are entirely appropriate for someone who is “made in the image of God.”

We reflect the nature of God
All these faculties of the human mind reflect the nature of God. However, God is spirit (John 4:24), and without a spirit, man would not be able to have a real relationship with God and be fully “made in the image of God”. The idea that there was a time when man’s ancestors possessed these unique faculties of the mind, but did not have a spirit, makes very little sense.
Some theistic evolutionists may counter this by claiming that spiritless hominids did not possess human reason, will and emotion – because these are faculties of the spirit, not the mind. If that were true, it would mean that for millions of years, hominids developed abilities and faculties of the body (including the brain) which were appropriate for highly intelligent, spiritual beings, and totally inappropriate for brute beasts. And yet their minds remained those of brute beasts! This also makes very little sense, and is equally unscriptural, if not more so. In fact, there is clear evidence that at least some so-called ‘hominids’ did have the faculties of human reason, will and emotion. There is also evidence (in the form of ritual burials) of belief in an afterlife – which is evidence of spirituality. For example, there is evidence that the Neanderthals had the faculty of speech, buried their dead ritualistically, played music, were artistic, made tools and used fire.10
In other words, they were fully human. The fact is there never were any hominids, in the sense of non-human ‘ape-men’ ancestral to humans. This conclusion is supported by the fossil evidence when it is studied in an open-minded way, without preconceived naturalistic assumptions.11