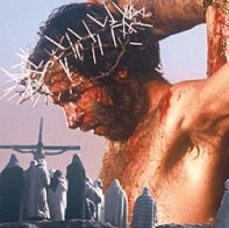 Do we blame the Roman soldiers?  Certainly they crucified Him.

It was a meaningless gesture for him to publically “wash his hands” and declare: “I am innocent of the blood of this just person.  You see to it”  Matthew 27:24.  How hypocritical!  He was the Roman governor.  As the highest magistrate in the land he had declared: “Having examined Him in your presence, I have found no fault in this man, concerning those things of which you accuse Him; no, neither did Herod, for I sent you back to him; and indeed nothing deserving of death has been done by Him.” Luke 23:14

“He who justifies the wicked, and he who condemns the just, both of them alike are an abomination to the Lord.” Proverbs 17:15

But what about the mob of people in the streets?  They were the ones who pressured Pontius Pilate to condemn the Lord to death.  “We have no king but Caesar!” they cried.  “Release Barabbas!” “Crucify Him! Crucify Him!” was their demand.  “His blood be on us and on our children” Matthew 27:25.

However, it was the religious leaders who initiated the arrest and trial of Jesus.  It was the religious leaders who incited the mob to scream for Barabbas to be released and Christ to be crucified. (Matthew 26:3 – 4; Luke 22:3 – 4; John 7:32).  “And there was one named Barabbas, who was chained with his fellow rebels; they had committed murder in the rebellion… but the chief priests stirred up the crowd, so that he should rather release Barabbas to them.” Mark 15:7,11

“They were insistent, demanding with loud voices that He be crucified.  And the voices of these men and of the chief priests prevailed.  So Pilate gave sentence that it should be as they requested.  And he released to them the one they requested, who for rebellion and murder had been thrown into prison; but he delivered Jesus to their will.” Luke 23:23 – 25

“You shall not follow a crowd to do evil; nor shall you testify in a dispute so as to turn aside many to pervert justice.” Exodus 23:2

And, of course, it was Judas who betrayed Christ – for mere silver.  Judas was one of the Lord’s trusted twelve disciples, the treasurer, but he became a traitor.  It has been common for Hollywood productions to deal very sympathetically with Judas, but the Bible is clear that Judas was greedy (Matt 26:14 – 15); treacherous (Luke 22:47 – 48); dishonest and hypocritical (John 12:5 – 6).  The Bible states it clearly that Judas Iscariot betrayed Christ (Matt10:4).  Judas asked the chief priests: “What are you willing to give me if I hand Him over to you?” Matt 26:14.   The Bible records that the chief priests were ‘delighted’ at Judas’s treachery (Mark 14:10).  Although Judas was the treasurer of the twelve, and fained concern for the poor, the Bible reveals that, in fact, Judas was a thief, stealing from the funds of the Lord Himself (John 12:4 – 6).  Far from Judas being a well-meaning victim of circumstances, the Bible is quite clear that he was a malicious traitor.  John’s Gospel plainly states: “Then satan entered into Judas” John 13:27.  Jesus was betrayed by Judas.

Yet, was it not God’s will that Christ suffer and die on the cross?  In the garden of Gethsemane, Jesus prayed: “Father, if it is Your will, take this cup away from Me; nevertheless, not My will, but Yours, be done.” Luke 22:42

However, we also need to ask whether it was not the Lord Jesus Christ Himself who was responsible for His own death?  As our Lord declared: “I lay down My life for the sheep… I lay down My life… no one takes it from Me, but I lay it down of Myself…” John 10:15 – 18.  Our Lord Jesus was not a victim, or a martyr, he was a willing sacrifice – an Atonement – for our sins.

So, in the final analysis, was it not your sin and my sin that was responsible for the sufferings and the atoning death of our Lord Jesus Christ?  It was for my sins that He suffered and died.

“But He was wounded for our transgressions, He was bruised for our iniquity; the chastisement for our peace was upon Him, and by His stripes we are healed.  All we like sheep have gone astray; we have turned, everyone, to his own way; and the Lord has laid on Him the iniquity of us all.  He was oppressed and He was afflicted, yet He opened not His mouth; He was led as a lamb to the slaughter, and as a sheep before its shearers is silent, so He opened not His mouth.  He was taken from prison and from judgment, but who will declare His generation?  For He was cut off from the land of the living; for the transgression of my people He was stricken… and He bore the sin of many, and made intercession for the transgressors.” Isaiah 53:5 – 12

“In this is love, not that we love God, but that He loved us and sent His Son to be the propitiation for our sins.” 1 John 4:10

God is a Holy God and His righteous standards are seen in His Law.  We are sinful and need to repent from our wickedness and place our trust in Christ.  Have you acknowledged your sinfulness and failings before Almighty God?  Have you thanked Him for dying on the cross for your sins?  Jesus died for you.  Are you living for Him?