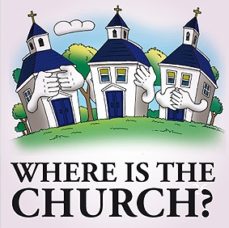 Where Is The Church? Its Tragic Lack of Involvement in SA

The ‘God and Government’ public debate I attended recently was a disturbing eye opener. Hosted by the Daily Dispatch and the University of Fort Hare, panellists included COPE leader Mvume Dandala, ACDP President Kenneth Meshoe, Godly Governance Network chairperson Sipho Mengezeleli, representatives from the Eastern Cape Council of Churches, the ANC and myself.

After preliminary remarks from the panellists, the debate was opened to the more than 500 participants who travelled from across the Eastern Cape to attend this topical discussion. The major theme to emerge from the debate was the tragic lack of involvement of the Church of Jesus Christ in the life of the nation. Almost every participant’s remarks concluded with the question “Where is the Church?”

where is the Church?
After carefully listening to various testimonies of the litany of horrors that ordinary citizens have to face on a daily basis, I have to admit the absence of the Church from social and public policy development must rank as one of the most tragic anomalies of our time. Most participants at the debate acknowledged that South Africa’s current social malaise is a direct result of the erosion of fundamental values in society and the inordinate dominance of liberal secular humanism in the development of public policy.
The call for more significant involvement from the Church in all aspects of society is reaching a crescendo. Christian citizen’s spoke of their frustrations, including being overwhelmed by hopelessness and despair as they witnessed evil prosper in their neighbourhoods, while the Church hosted one glittering conference after another. High profile speakers are flown in at great expense for a few days of excitement, with teaching that result in little or no benefit to surrounding communities.

a nation under secular law
Since the birth of South Africa’s democracy in 1994, the Church appears to have withdrawn into self-imposed Christian ghettoes from where it views society’s startling moral collapse with trepidation. The Church seems to have surrendered to the false ideology preached by the high priests of secular humanism. Our secular  constitution, with all the so-called ‘human rights’ it confers on citizens, has produced a self-seeking and materialistic society that has lost its moral equilibrium. Post-Apartheid South Africa has not become the free, caring and responsible society that so many envisioned. Instead, we have jettisoned the Laws, values and principles that God provided for our own safety and protection, along with the many restrictive and oppressive laws of the past. As a result, the nation groans under a steady onslaught of crime, violence, corruption, sexual immorality and family breakdown that threatens to undermine the nation’s future success.

evil triumphs when we do nothing!
The current debate whether to decriminalise or legalise prostitution is a case in point. Despite the horrendous consequences of legalised prostitution on women, children and general society, secular humanists and the liberal media argue this is not a moral issue. Like same-sex marriage, abortion on demand and the proliferation of pornography/prostitution, they say, is a human rights issue. The destructive consequences of these policies on the family and the greater social community seem to have no effect on those advocating them.
This leaves the Church, with its God-given mandate, to be Salt and Light to society to defend the family. The moral decay so pervasive in South African society today is a direct result of the absence of the active involvement of the Church in the nation. 18th Century statesman, Edmund Burke’s comment “All that is necessary for the triumph of evil, is that good men do nothing” has particular resonance for the Church in South Africa.

church – rise up and respond
But why has the Church withdrawn from the public policy debate and surrendered the political realm to the Godless? Since South Africa’s constitution was signed into law in 1996, secular humanists, supported by the liberal media, have embarked upon a misinformation campaign that advances the idea that faith has no place in the political discourse. Christianity was erroneously blamed for Apartheid – and the elevation of South Africa’s ultra liberal constitution as the supreme law of the land, as the nation’s salvation. Alarmingly, the Church appears to have taken its cue from the media and gone into hibernation.
The time has come for the Church to begin taking its instructions directly from Jesus Christ. The devastating consequences of secular humanism on society have primed the nation for the genuine freedom the Gospel brings – not only the preaching, but its active demonstration in every area of life. The question is, “will the Church exercise the spiritual discernment necessary to evaluate the heart cry of the nation and respond?”