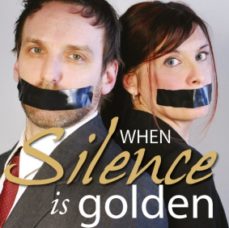 Stop talking. We mean it.
Having a tug-of-war with your partner about where to go on your next date? Whether to relocate for a new job opportunity? How to discipline your kids? Ask anyone with an opinion and they’ll tell you the same thing: “You’ve got to talk it through.”
Yes, there are times to talk. But there are times when conversation isn’t necessary, and is even hurtful.
There can be power and wisdom in not talking – in biding your time, walking away, or simply shutting up and getting on with things. So try not talking during these times:

Wife: “We need to figure out how we’re going to handle childcare for Thursday night.”
Husband (while balancing the cheque book): “What?”
Wife: “Sara can’t watch the kids, but Amy can. But the boys are never well behaved when Amy watches them. Don’t you think we should pass on Amy?”
Husband (eyes still on the cheque book): “Umm, what’s this about now? Amy who?”
Wife: “Sarah can’t watch the kids.”
Husband (making eye contact): “When?”
Wife: “Why don’t you listen to me?”
He may not be listening because you’re talking when he isn’t ready. I (Leslie) have learned and relearned the price of this mistake. I can’t count the times I’ve tried to converse with Les when he was in the middle of a task, and I ended up getting my feelings hurt. So take it from me, if you have something on your mind and your partner isn’t ready to discuss it, clam up. Let him or her know you want to talk. Say something such as, “I need to talk to you about childcare when you’re ready. Will you have some time before dinner?” That’s all it takes to make sure your partner’s mind is in a receptive place.

If you’ve been telling him for eight years not to put his jacket on the dining room chair, or you’ve been suggesting ways to curb her tardiness since your honeymoon, it might be time to take a permanent break from the conversation. Spewing endless critiques or advice in a vain attempt to change your partner isn’t going to provide the solution.

This isn’t about giving up.  This is about nagging. If you’ve asked, cajoled, threatened, and analysed your man on the subject of hanging his coat in the closet, and he never does, you have some options: (a) you decide to hang it for him and say no more about it; (b) you leave it there and say nothing; or (c) button your lips and pray about it.
The bottom line is that you need to give up the conversations you keep on having over and over and over. They’ll grind both of you down.

Recently, we were talking with a friend who works as a management consultant. He told us that “power stalling” is common practice in every company, and he asked if we used it in our marriage work. We were intrigued.
“On the job,” he said, “if someone runs a new idea past me in the hall, I say, ‘That’s interesting. Let me think about it.’ But somehow if my wife runs one past me, I’m apt to snap, ‘No, I don’t like that.’ It’s as though I become a five year old at home.”
We immediately knew what he meant. The idea of reining in feelings is anathema to most couples. If he proposes a whitewater rafting trip, you come back immediately with a tirade of how you’ve had your heart set on a resort. If she proposes an outing to a friend’s barbeque, you hurl protests that you’ll be bored, and you don’t even know her friend.  But wait. Instead, why not say, “Let me think about that and get back to you”? This buys you a cooling-off period, time to weigh how you feel about something without the pressure of having to give an immediate reply. And it gives you time to compose a thoughtful response.

Maybe she had a bad interaction with the children. Maybe his boss yelled at him. Whatever the explanation, you’ve initiated a discussion about finances, and he starts to complain about your attitude and how you’re attacking him. “You always criticise me, and you never appreciate what I do for you.” At this point, the wisest tack is to discuss neither the new budget nor his behaviour, but to say as calmly as you can, “I’m going to give you some space right now.” You don’t need to be judgmental. Just set a boundary by clamming up until things calm down.
Of course, the same holds true when the shoe is on the other foot. When you’re feeling a little insane and your emotions are like a ticking time bomb, you need to give yourself some space. Too many couples try to have rational conversations when one of them is in an irrational place. It never works. The next time one of you is being unreasonable, hold off on conversing and provide a space for sanity.  Once you’ve both taken a bit of refuge from each other, you’re bound to have a more reasonable conversation.

Les and I were having a reasonable conversation about how to arrange the furniture.  With the addition of a second baby and soon-to-be-toddler to our family, we both agreed it was time to convert the formal living room into a play space.  As we jockeyed the furniture around, we realised some pieces would have to go.
“I’ve never really liked that antique table we put all the photos on,” said Les.
“You’re kidding?” I responded.  “That’s my favourite piece of furniture.”
“You like it because you like the photos on it,” Les protested.
“Excuse me – I know what I like, and I like the table.”
“Well, we can keep the table and put the toys on top of it,” Les suggested.
“Why don’t we get rid of your book shelf?” I countered.
“Suddenly it’s my bookshelf?”
“You know I never wanted it in here.”
“Well, what about the painting upstairs I can’t stand?” asked Les.
“The one your parents gave us?
That’s your issue…”
“Okay, you want to bring parents into this discussion…”
“Wait a second, time out, what are we doing?” I asked.  “What are we even talking about?”
Ever have one of those?  We’ve all had conversations that get derailed.  You start out talking about what colour to paint the kitchen, and suddenly you’re fighting about ice-cream and the proper temperature for the freezer.  When you can no longer remember what exactly you’re trying to decide.  When you have to ask, “What are we arguing about?” take a time-out and cool down.  We have a phrase we use to help us stay on track:  “Let’s cool our heads and warm our hearts.”  This simple reminder keeps us from being swallowed by a conversation that’s turned silly and is bordering on becoming vicious.

Whenever we talk about something we need to do instead of actually doing it, we may believe we’re getting closer to taking action.  But we aren’t.  We’re in denial.
The subject of sex is a good example.  When partners talk about why they’re not having much sex in their marriage, their very conversation can keep them from acting.  It creates more pressure.  Their lack of sex has now become an “issue.”  And issues need to be explored, right?  So they examine every side of the problem and become more inactive with each conversation. They fall victim to the “paralysis of analysis.”  Their discussions lead to terminal inaction.  In the time they spend talking about why they’re not making love, they could be making love.  So if you’re using your conversation to avoid action, don’t delay.  Stop stewing and start doing.  William Penn, the founder of Pennsylvania, was imprisoned during the fifteenth century for Quaker beliefs.  While in prison, he wrote, “True silence is rest for the mind.”  Indeed it is.  A moment of quiet reflection at the right time nourishes and refreshes the spirit of communication.