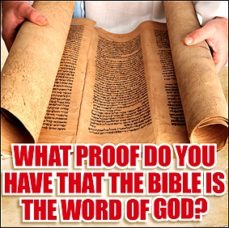 What Proof Do You Have That The Bible Is The Word Of God
Some people see Christianity as some kind of intellectual suicide. A blind leap of faith. However, Christianity is a reasonable faith. It is based on incontrovertible, historical facts. Christianity is not a blind leap into the dark. It is an intelligent step into the light. There is nothing virtuous about gullibility. We are not proclaiming faith in faith. It is all too possible to be sincerely wrong. Our faith needs to be in the facts that God has revealed in Scripture and in Creation. Any skeptical enquirer is to be commended for wanting to examine the foundations of our faith. And the Bible forms the solid foundation for our faith. The Bible stands as the greatest Book ever written. It is unique in its circulation. The first book to ever be printed was the Bible and it  has been read by more people, and printed more times, than any other book in history. No other book has been translated into so many languages.

The forbidden book
It is unique in its survival. No other book has been so viciously attacked throughout history as the Bible. In AD300 the Roman emperor Diocletian ordered that every Bible be sought out and burned. He was determined to destroy Christianity by destroying the Scriptures it was founded on. Anyone caught with a Bible would be executed.

War against God
Throughout history other tyrants have waged a war against God, seeking to annihilate the Christian Church. In the 20th Century alone well over 60 million Christians were killed by atheistic regimes. Vladimir Lenin and Joseph Stalin of the Soviet Union closed down or destroyed over 48 000 churches and imprisoned more than 50 million Russian Christians. Mao Tse Tung’s Marxist regime in Red China also sought to annihilate the Christian Church. Enver Hoxa declared Albania the first truly atheistic country in the world after closing every church and killing every minister in the country. Every Bible was destroyed and people were imprisoned in labour camps for merely mentioning the Name of God. Samora Machel similarly attempted to turn Mozambique into the first truly atheistic country in Africa. Yet, despite the most extraordinary campaigns to destroy Bibles, the Bible has survived to continue to be the world’s best selling book of all time.

No other ancient writing has as many manuscripts, and certainly no other book has been so scrutinised and subjected to such critical analysis, and yet survived the most withering campaigns of criticism.

Impressive credentials
The discovery of the Dead Sea Scrolls in cliff top caves at Qumran, in 1949, provided manuscripts dating from the 3rd Century BC to the 1st Century AD. It included a complete book of Isaiah and thousands of fragments representing almost every other Old Testament book of the Bible. Students were astounded to find that the manuscripts and translations which we have available to us today were accurate and reliable in every way. The Bible, on any level you might wish to examine it, is the most impressively credentialed work of ancient literature.

Now, you may say, that’s all very well, but how can I know that the Bible is the Word of God? The Law of God sets up a litmus test for prophecy: “When a prophet speaks in the Name of the Lord, if the thing does not happen, or come to pass, that is the thing which the Lord has not spoken; the prophet has spoken it presumptuously; you shall not be afraid of him.” Deut 18:22

Testing the Bible’s truth
It is a fact that, of the 26 books of the world, that either claim to be, or have been proclaimed to be, Scripture, the issue of specific prophecy is glaringly absent. You do not find specific prophecies concerning events, far in the future, in the writings of Buddha, Lao-Tsu, Confucius, or Muhammad. However, the Bible is absolutely unique in that, in the Old Testament alone, there are more than 2 000 specific prophecies that have already been fulfilled. There has never been anything else in all of history to compare with the Bible’s prophecies.

You may say, weren’t they just lucky guesses, or vague generalities that could be interpreted in any way? Well, you be the judge. Consider these:

1. Prophecy about Egypt
At the time when Egypt was the greatest nation in the entire world, the king of nations, the richest country on earth, Ezekiel prophesied: “There shall no longer be princes from the land of Egypt” Ezekiel 30:13.

It is a fact of history that, until a few decades ago when the monarchy was overthrown, Egypt was always ruled by a prince, but during the 2 500 years since this prophecy was given, the princes of Egypt were never Egyptian. Their kings and queens have been Persians, Macedonians, Romans, Greeks, Arabs and Ottoman Turks. Egypt has even been ruled by the English. But since the prophecy, given through Ezekiel, no Egyptian monarch has ruled over Egypt. When Egypt was the world’s superpower, no one would have predicted that.

Babylon was not only the greatest empire in ancient times, its capital city was the greatest city in the world. The historian Herodotus recorded that the city consisted of 196 square miles of the most beautiful architecture, hanging gardens, palaces and temples. Every authority at the time would agree that the city of Babylon was impregnable. Yet the Word of God came that: “The broad walls of Babylon shall be utterly broken …it shall be desolate forever.” Jer 51:58-62

Now, the Great Wall of China is not nearly as wide, nor as strong, as the walls of Babylon were, and although it is older, it still stands today. The walls of Jerusalem still stand. But today there is no doubt that the walls of Babylon have been destroyed. Determined to make this the capital of his worldwide empire, Alexander the Great decided that he would rebuild Babylon. Alexander issued 600 000 rations to his soldiers. Yet, when Alexander died at the age of 32, his plans were abandoned.

In the 4th Century AD, Julian the Apostate, who attempted to restore paganism to Rome, was engaged in a war with the Persians. To prevent the Persians re-establishing the defences of Babylon, Julian ordered the remnants of the wall of Babylon completely broken down. In this surprising way, one of Scriptures greatest antagonists of all time became the agent to fulfilling one of the clearest and most repeated prophecies in the Old Testament. “Because of the wrath of the Lord it shall not be inhabited, but it shall be wholly desolate …it shall be no more inhabited forever.” Jer 50:13,39. Today the ruins of Babylon are a wilderness inhabited by scorpions and snakes.

3. Tyre
The city of Tyre was to the sea what Babylon was to the land. Tyre was the greatest port city in the ancient world. Yet, at the height of its power, God declared that this city would be destroyed, that its towers would be broken down, and that its stones and timber, and even its dust, would be laid in the midst of the water and it would become like the top of a rock, a place for the spreading of nets in the midst of the sea (Ezekiel 26:4-14). This very strange prophecy began to be fulfilled when Nebuchadnezzar of Babylon marched his army to the walls of Tyre and for 13 years besieged the city. When finally the walls of the city crumbled, they found that many of the inhabitants had moved to an island half a mile out into the Mediterranean where they had built another city.

For hundreds of years one might have said that the prophecy given through Ezekiel was not completely fulfilled. Then Alexander the Great came, defeated the Persians and demanded the surrender of the port cities of the Eastern Mediterranean. Tyre alone refused to open its gates to him, so Alexander then conceived the boldest and most daring plan in siege history. He ordered a causeway built across half a mile of the Mediterranean Sea to the island of the new Tyre. All the walls of Tyre were torn down. They scraped the very dust of the city itself into the sea to make this highway to destroy the new island city of Tyre. Hence the prophecy in Ezekiel 26 was completely fulfilled.

6. Jerusalem
There were numerous other prophecies, that Jerusalem, the capital of the Southern Kingdom of Judah would be destroyed, its inhabitants carried away and its wall broken down (Jeremiah 24:9; 29:21; 35:17). There were further prophecies that the city and the walls would be rebuilt and the people would be brought back (Isaiah 4:3-6). History records that all of this indeed happened.

7. Petra
When Petra was one of the great cities of the ancient world, and Edom was a powerful nation, the Word of God came to Edom from Ezekiel (35:3-4,9). To visit the desolate land that once was Edom, and the deserted ruins of Petra today, it is hard to imagine the power and prestige that these places once had when the prophecy was given.

Those people who say that the Bible was just written by men are simply expressing their own ignorance on the subject. The power revealed through the Scriptures is none other than the power of God. “Remember the former things of old; for I am God, and there is no other; I am God, and there is none like Me, declaring the end from the beginning, and from ancient times things that are not yet done.” Isaiah 46:9-10