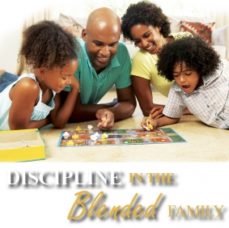 Within the remarriage context, discipline is one of the main contributory factors towards parental conflict. It would seem that the biggest failing with couples preparing for marriage, is that more often than not, the whole aspect of disciplining is not discussed beforehand.

Each parent comes into the marriage with a preconceived idea of how they are going to discipline their own children (and of course their spouse’s children as well!). Perhaps these ideas have come from the way they were disciplined by their own parents or perhaps they might even have developed a discipline mode that is contrary to their own upbringing as a reaction to harsh punitive methods used on them as they were growing up.
Examining your discipline style

Parents often have an unrealistic expectation that their step children will adhere to a ‘one and only’ method of discipline. A child that resides primarily outside the home is more often than not exposed to two or three different discipline systems. The parent in the primary residence will use discipline measures different to the parent that does the intermittent parenting, and the step parent in turn will most probably use a contrary measure to her/his spouse.
The bewildered child, more often than not, will react with bad behaviour as he/she tries to make sense of these systems.
Firstly, parents need to look at the motivation behind their disciplining. Are they disciplining because of the fact that the child has not adhered to their rules and needs to be taught a lesson and be put in their place?

Discipline is not to be a weapon
Sometimes when the children do not respond with the expected obedience and respect, step-parents can react by tightening the reins to show who is in control. Discipline, in this case, can become a way of protecting the parent’s position in the family, rather than a way to bring about training, instruction and correction for the betterment of the child.
In this scenario discipline can become an oppressive tool. Discipline is also not to be used as a weapon of vengeance. As a step-parent you will suffer wrongs caused by your step-children but the heart of discipline still has to be for instruction and correction, and not for ‘pay back time’ for the so called turmoil the children caused you.

Three types of discipline
Secondly, parents have to become aware of the three major discipline styles so that they in turn can make style changes to bring out the best in each situation:
•    Authoritarian discipline: These parents rigidly enforce their standards on their children with little regard on how it impacts on the esteem and uniqueness of the child. They expect high standards and as long as the child is well-behaved and order is maintained then the parents feel they have done a good job. The kids grow up fearful and desperately try to please in every way
•    Permissive discipline: These parents set very few rules or standards for the children. The children are often left to their own devices and have to use their own discretion when making decisions. Children from these homes are found to be the least competent, the least self-controlled and are often immature
•    Authoritative discipline: These parents balance a firm control of a child’s behaviour whilst at the same time allowing and encouraging individuality. They expect high standards but provide support for success. The children from these homes grow up self confident, self controlled and more competent.

A tendency for leniency
Unfortunately the authoritative style is less likely to be used in a remarriage situation, as more often than not a more lenient style of parenting is used. As an example – if a father only sees his children once in two weeks he will not want to alienate them in any way or give them any reason for not visiting him. So more often than not he will be extremely lenient with them when they visit him. For instance the scenario can develop of a mother with her own children marrying a man who only sees his children on the weekends. Imagine the frustration as this mother disciplines her own children but sees her step-children getting off scot- free for the same transgression.

Important questions
Thirdly, before couples marry, and even afterwards the couples need to continually evaluate their methods of discipline and the expectations they have of the children. These expectations and methods need to be re-evaluated as the children go through the various stages of life, for example: as toddlers, pre-schoolers, school goers, adolescents etc. Some guidelines for discussion regarding discipline:
1.    Do you both use corporal punishment or do you both agree on another system of discipline?
2.    Do you both agree in using Biblical principles when disciplining the children? What is your understanding of these principles?
3.    Do you incorporate your children in the decision making process regarding discipline?

Non-primary residence parents
For the parent whose child comes from a primary residence other than your home:
1.    When do you not feel at liberty to discipline your child when they do something wrong?
2.    When is there reticence and hesitation regarding discipline because of the possibility of alienation?
3.    In what areas do you not treat your stepchildren the same way as your own child?

Primary residence parent
To the parent whose child lives with them:
1.    When do you find yourself feeling resentment in the way your spouse deals with your child?
2.    In what ways do you find your spouse unreasonable in the area of discipline?
3.    Do you sometimes feel resentful in the ways your spouse treats his/her children compared to yours?  Why?

General tips
•    Goals for disciplining must be explored. Is the goal to punish or to train? The Biblical principle is: “Parents do not treat your children in such a way as to make them angry. Instead raise them with Christian discipline and instruction” Eph 6:4
•.    Boundaries must be agreed upon with regards to the children
• Each parent should be encouraged to discipline their own children and ‘the other parent’ is there to support them
•    The couple should be encouraged to support each other no matter what decision is made regarding discipline
•    Determine never to have a major quarrel regarding discipline in front of the kids
• Once you have determined your discipline style, discuss with your spouse a compromise for the benefit of your child
•    A child’s behaviour is not going to change overnight. Work together, make a plan, communicate the plan to your children, and follow through on what you decide.