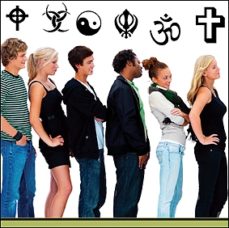 What is Universalism?
Of late, the term universalism has been bandied about theological circles. As people depart from a Biblical worldview and embrace humanist thinking, so principles of universalism spread. According to theologian JJ Packer, “a Universalist is someone who believes that every human being whom God has created or will create, will finally come to enjoy the everlasting salvation into which Christians enter, here and now.”

Many ways to God
This challenge to sound Biblical theology goes right back to the days of Origen in the sixth Century A.D. He taught the universal return to God and restoration of all souls, known as the Doctrine of Apokatastasis. He was declared a heretic by the Early Church at the Council of Constantinople in AD 553, his doctrine completely rejected and the Biblical teaching of eternal damnation reaffirmed.

Sadly, some Christians have continued to hold universalistic opinions. In a recent poll conducted by Barna Research, 57% agreed that all faiths teach the same basic lessons and there are many ways to God. Jesus is just one of them.

No absolute Truth
How did the Church move from sound Biblical doctrine as taught in the Inspired Scriptures to religious philosophies that fly in the face of much that Jesus taught?

Modernism challenged Christianity in the 18th Century. In essence, it insisted that logic was the answer to life. Faith and experience were to be considered suspect and human reason was supposed to bring about a better life for all. Frederick Nietzsche, patron saint of what is known as Post-Modernism, introduced his theory of Relativism or ‘Perspectivism’ in the 19th Century. He taught that all knowledge (including science) is a matter of perspective and interpretation. There is no absolute truth and what is true for you may not be true for me. Everything is relative to one’s belief and ideas.

Post-modern thinking soon began to influence Christian thinking as sections of the Church attempted to become acceptable in an age that condemned Christians as intolerant, arrogant, bigoted and out-of-date.

The ‘Emerging Church’
The ‘Emerging Church’ movement of the 20th Century attempted to accommodate Christian beliefs to so-called modern thinking. “A conversational, grassroots movement to contextualise the Gospel for the changing world of the 21st Century”, it embraces all kinds of unbiblical teaching and behaviour. It has been described as the latest version of Liberalism (a free way of thinking and acting).

Universalistic in outlook, the Biblical doctrine of hell is roundly condemned by the Emerging Church movement as being anathema to the Heart of God, whose intention it is to restore all things to Himself in eternity.

Rob Bell’s popular book ‘Love Wins’, published in March 2011, talks about ‘recapturing the Gospel’ and emphasises that the loving nature of God means everyone will ultimately be forgiven and saved. He writes that Christianity has a “wide variety of perspectives” on judgement and reconciliation and Christians should be open to the possibility that ‘repentance’ can come after death. For him, the concept of ‘hellfire and brimstone’ is toxic and misguided and an affront to a just and holy God.

Individual choice
Described by Time Magazine as “one of the 25 most influential Evangelicals in America,” Emerging Church leader, Brian McLaren, has defended Rob Bell’s book with passion. God’s Book – the Bible – declares that hell is a very real place. God loved the world so much that He did everything in His power to prevent people from spending Eternity in this place prepared for the devil and his angels. (Matthew 25:41). This life is mankind’s one chance of taking advantage of so great a salvation because “it is appointed for men to die once, but after this the Judgement” Heb. 9;27. There is no second chance.

Universalism appears to rest on an insistence that there is no absolute truth, especially in matters of religion and spiritually. Nothing is absolute. Everything falls into the category of individual choice or group cultural norms. You are welcome to believe whatever you like, so long as you don’t insist it is absolutely true and expect others to follow the same practice or belief. It seems the only ‘absolute truth’ allowed by this movement is that “there is no absolute truth”!

Post-modern doctrines
Basically the doctrines of the post-modern Emerging Church that open the door to an acceptance of universalism include the following:

Denial of the Authority of Scripture.  Brian McLaren declares we should shy away from describing the Bible as “the authority”, “infallible” or “inerrant” (without error). (Generous Orthodoxy). Biblical doctrine is viewed as divisive and modified so as not to offend. Bible Prophecy is despised and rejected. Bible studies and sermons are replaced by leaders’ handbooks and methods. Emerging Church leaders admit they have no idea what “most of the Bible means” (Rob & Kristen Bell, Christianity Today article, Nov. 2004). The fact that Jesus declared “Heaven and earth will pass away, but My words will by no means pass away” Matt 24:35 carries no weight in post-modern thinking
Questioning of the Divinity of Christ. It should not shake our faith if we find the Bible inaccurate. e.g. If we found out “that Jesus had a real earthly, biological father named Larry…and that the virgin birth was just a bit of mythologising the Gospel writers threw in.” (Rob Bell, Velvet Elvis). The One who is declared to be “The Way, the Truth and the Life” John 14:6 becomes “A Way, A Truth and A Life”. The ‘authority’ of the accepted leaders propagating this religious philosophy is, however, non-negotiable
Denial of Hell. The church should be ‘inconclusive’ about the eternal destiny of non-Christians and should change its historic belief in hell. Universalism allows us to discredit and ignore the teaching of the Eternal Son of God
Re-Interpretation of the Gospel. We should not be so concerned with ‘being saved’ or finding ‘right answers’ and ‘any Christian who sees a difference between us and the world is probably arrogant’. Following Christianity (as defined by post-modern thinking) is a better ‘alternative lifestyle’. Truth is replaced by tolerance and ‘seeker-friendly’ ministry. Sharing the Gospel becomes a ‘conversation’ about our personal religious beliefs and a sharing of ideas. e.g. Rob Bell’s popular NOOMA videos
Re-interpreting the Meaning of the Cross. The substitutionary nature of the Cross is flatly denied. We believe in ‘a form of cosmic child abuse’ if we say Jesus died to pay the price demanded by His Father’s holy wrath. Sin and repentance are outmoded concepts. We no longer live in a culture of animal sacrifices to the gods. The Biblical understanding of the Cross belongs to a primitive cultural world we no longer inhabit
Denial of the Sovereignty of God.  Because truth is relative, our future lies in our own hands and God has no authority over or even knowledge of the future. He is dependent on our choices
Evangelism and Missions replaced by Pluralism and Syncretism. No one can claim his or her religion is true and another false and we should accept and learn from other religions (Pluralism). All have truth inherent in them and merging of ideas, beliefs and philosophies (syncretism) is acceptable
Mysticism and Eastern Religion acceptable. Faith is replaced by ‘feeling’ and ‘experience’
Loss of Discernment. The Bible has no authority to say how we should live. Everything is a matter of personal interpretation. e.g. The Church should consider taking “a five-year moratorium on making pronouncements” against homosexuality. (http://blog.christianitytoday.com).

The results of universalism are seen globally today as a powerless church preaches a powerless message that is highly tolerant of alternative viewpoints and behaviour.

The Gospel of Christ
“I am astonished that you are so quickly deserting the One who called you by the grace of Christ and are turning to a different gospel – which is really no gospel at all. Evidently some people are throwing you into confusion and are trying to pervert the Gospel of Christ. But even if we or an angel from Heaven should preach a gospel other than the one we preached to you, let him be eternally condemned! As we have already said, so now I say again: If anybody is preaching to you a gospel other than what you accepted, let him be eternally condemned! Galatians 1:6-10, 4:16