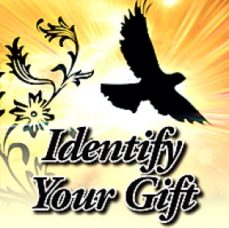 Identify Your Gift
Over the last few editions, we have been looking at the seven motivational gifts in detail. It is important that every Christian understand their role in the Body of Christ, and identify the specific giftings the Lord has given them – so that they can contribute accordingly. A Christian can exhibit one or several of the following gifts (that are given freely by the Holy Spirit): prophetic (perceiving) gifting, teaching gifting, gift of serving, exhorting, ruling, giving and mercy. See 1 Corinthians 12:7-10 for details.
In Scripture we are taught to:

Prophesy
“Pursue love, and desire spiritual gifts, but especially that you may prophesy.” 1 Cor 14:1

Serve
“For you brethren, have been called to liberty; only do not use liberty as an opportunity for the flesh, but through love, serve one another.” Gal 5:13

Teach
“Let the Word of Christ dwell in you richly in all wisdom, teaching and admonishing one another in psalms and hymns and spiritual songs, singing with grace in your hearts to the Lord.” Col 3:16

“Go therefore and make disciples of all the nations, baptising them in the Name of the Father and of the Son and of the Holy Spirit, teaching them to observe all things that I have commanded you; and lo, I am with you always, even to the end of the age.” Matt 28:19-20

“But exhorting one another, and so much the more as you see the Day approaching.” Heb 10:25b

Give
“Give and it will be given to you: good measure, pressed down, shaken together and running over will be put into your bosom. For with the same measure that you use, it will be measured back to you.” Luke 6:38

“Distributing to the needs of the saints, given to hospitality.” Rom 12:13

Rule
“One who rules his own house well, having his children in submission with all reverence.” 1 Tim 3:4.

“A wise servant will rule over a son who causes shame, and will share an inheritance among the brothers.” Prov 17:2

“He who is slow to anger is better than the mighty, and he who rules his spirit than he who takes a city.” Prov 16:32

Show mercy
“Bear one another’s burdens, and so fulfil the law of Christ.” Gal 6:2

In Jesus, we see each motivation:
1. Prophet
“But when Jesus perceived their thought, He answered and said to them, ‘Why are you reasoning in your hearts?’” Luke 5:21-22

“Therefore do not fear them. For there is nothing covered that will not be revealed, and hidden that will not be known. Whatever I tell you in the dark, speak in the light; and what you hear in the ear, preach on the housetops.” Matt 10:26-38

2. Servant
“After that, He poured water into a basin and began to wash the disciples’ feet, and to wipe them with the towel with which He was girded.” John 13:5

3. Teacher
“Then He went down to Capernaum, a city of Galilee, and was teaching them on the Sabbaths. And they were astonished at His teaching, for His word was with authority.” Luke 4:31-32

“Then He opened His mouth and taught them.” Matt 5:2

5. Giver
“And I will give them eternal life, and they shall never perish; neither shall anyone snatch them out of My hand.” John 10:28

6. Ruler/Administrator
“Then He commanded them to make all sit down in groups on the green grass. So they sat down in ranks, in hundreds and in fifties. And when He had taken five loaves and the two fish, He looked up to Heaven, blessed and broke the loaves, and gave them to His disciples to set before them; and the two fish He divided among them all.” Mark 6:39-45

“So when they were filled, He said to His disciples, ‘Gather up the fragments that remain, so that nothing is lost.’” John 6:12

7. Man of mercy
“When the Lord saw her, He had compassion on her and said to her, ‘Do not weep’.” Luke 7:13. “But when He saw the multitudes, He was moved with compassion for them; because they were weary and scattered, like sheep having no shepherd.” Matt 9:36