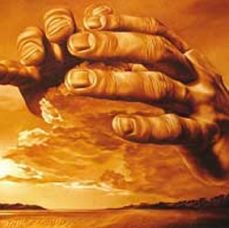 Anyone in military service knows and understands the importance of submitting to authority. Any outfit that is divided is one that will be defeated. God’s Word shows us that His servants will not be divided in the final battle of the Church Age; rather they will be of one accord and victorious. So in order for the Lord to enlist us for any position in His service in these final days of the Church Age, we must be completely submitted to His authority, whether it is His direct or delegated authority. We must remember all legitimate authority is from God, as Paul tells us in Rom 13:1-2.
I find that western believers are some of the most difficult people to teach the Word of God. It is for one main reason. We are a people trying to understand Kingdom principles with a democratic mind-set. For this reason the western Church will go through some of the most difficult trials in the days to come in order to bring us to a place of brokenness. When we speak of broken, we don’t mean battered, beaten, or hopeless.

Submission
To understand ‘broken’, we need to look at a war horse. A horse can be the most gifted, fastest and strongest of all, but if he is not broken, he is not fit for battle. When war time comes, less gifted horses will go to the battle because they are broken and he is not. What does brokenness deal with? When the rider commands the horse to ride full gallop into the battle, the horse will not deviate for his own protection or benefit; he is completely submitted to authority. The broken horse obeys and doesn’t need an explanation.
True obedience can best be seen in the life of Abraham. After waiting years for the child promised to him, Abraham finally had the promise fulfilled in Isaac. Everything seemed to be going great. “Then God came to Abraham one evening and said, ‘Abraham, I want you to take a three day journey and then offer your son as a sacrifice.’” Can you imagine this command? Here is the son that was promised to you, that you waited years for and now God is commanding you to sacrifice him with no explanation? How many of us would have gone back and forth with God for days, weeks, or even years before we obeyed? But look at how Abraham responded in Gen. 22:3: “So Abraham rose early in the morning…” Notice his instant obedience.
It took Abraham three days to get to the mountain where he was to offer as a sacrifice the most valuable thing in his life, his son Isaac. The three day journey gave Abraham time to think things through. If he was going to turn back, he would have done it during this time. But he didn’t. He continued obeying all the way to the top of the mountain and bound his son on the altar to sacrifice him. Only when he raised the knife to slay Isaac, did the angel of the Lord stop him.

Obedience
Abraham obeyed to completion. He didn’t stop short, even by letting go of the most important thing in his life, Isaac, his heir and home, his promise from God. Abraham proved his passion for obedience outweighed even his desire for the promises. For this reason he is called the father of faith and the friend of God. Abraham was fully submitted to the authority of God.  We need to fully understand this idea of authority in order for us to be able to be effective on the earth. The early Church started from 120 persons in the upper room. Interestingly Jesus ministered to thousands. After He was executed by a criminal death and resurrected, there were only five hundred. (See 1 Cor 15:6). What happened to the thousands? Jesus told the five hundred to go to the upper room, and I personally believe all did, but after ten days three-fourths went their own way. Why? The reasons were probably numerous, but all of them dealt with looking back and not remaining under God’s rule. They were not broken; they were not fit.

Unity
Even in the upper room they were tested. Peter, the leader, made many mistakes and so often was totally out of sync with Jesus. He wanted to build tabernacles for Elijah and Moses; he was rebuked for seeking the desires of men rather than God; his greatest reach of love was to forgive seven times, but Jesus multiplied it by seventy… and the list continues. However, he continually submitted to Jesus’ correction and stayed loyal.
In the upper room Peter was true to form. He told those present that they had to select another apostle to replace Judas, for Scripture stated that another should take his office. So two were chosen and they drew lots. Now, God does not choose apostles by a lottery system. Again, Peter is out of sync, and we can see the fruit of his leadership as Matthias, the one chosen, is never heard of again in the New Testament. Paul said of himself, “Then last of all He [Jesus] was seen by me also, as by one born out of due time” Cor 15:8. I personally believe Paul was God’s choice to replace Judas.
In any case, the amazing thing is that even though Peter was ‘out of sync’, no one caused a stir or left. Rather, we read in Acts 2:1, “They were all with one accord.” God had a group of people who were truly under His rule. Out of the thousands to whom Jesus ministered, only a small remnant could be used in His ‘special-ops’ force to bring the outpouring of His Spirit to the world.

Submit to authority
Can you imagine if Peter was in the western church today making a decision like that? Most likely there would have been a church spilt. Several groups would have emerged. The ‘anti lot-picking’ group, the ‘apostolic lot-picking’ group, the ‘no more new apostle’ group and more. These believers were broken – they were submitted to authority, whether it was Jesus’ direct authority (telling them to go to the upper room and wait) or His delegated authority (Peter picking an apostle by lots).
At this point let me interject this important point by asking this question: Where do we draw the line when it comes to authority? Does God expect us to obey authorities, no matter what they tell us to do? The only time—and I want to emphasise the only exception in which we are not to obey authorities —is when they tell us to do something that is sin, but even then we are to still keep an attitude of submission toward their authority.
Nebuchadnezzar, the king of Babylon, was brutal and destroyed many descendents of Israel as well as their homeland. Yet in Jer 25:9 and 27:5-7 God called him His servant, again confirming God is the One who gives authority to man. This king brought back a remnant of God’s people captive to Babylon. Among these were Shadrach, Meshach and Abed-Nego.

Respect authority
This king made a decree requiring all the people to bow and worship a golden image when they heard the sound of musical instruments. Shadrach, Meshach and Abed-Nego did not obey this decree, for it directly violated the second commandment God gave through Moses and recorded in the Torah. They disobeyed the ordinance of man in order to obey the ordinance of God. It was only a matter of time before this came to the attention of King Nebuchadnezzar. He was furious with Shadrach, Meshach and Abed-Nego and he had them brought before him for questioning. Listen to their reply: “O Nebuchadnezzar, we do not need to defend ourselves before you. If we are thrown into the blazing furnace, the God whom we serve is able to save us. He will rescue us from your power, Your Majesty. But even if He doesn’t, Your Majesty can be sure that we will never serve your gods or worship the gold statue you have set up” Dan. 3:16-18, NLT.
Notice they stood firm in obedience to God’s command, yet spoke to the king with respect. They addressed him as “Your Majesty,” not “You jerk, we’ll never do what you say!” To speak in this manner of disrespect would have been rebellious, as we are to submit to authority (in heart and attitude) even when we must disobey their command.

Trust God
In returning to Peter’s exhortation of it being time for judgment to begin in the house of God, we discover that to truly understand what he is saying, we must read the preceding statements. In the previous chapters he discusses authority in depth. He writes about both direct and delegated authority.  He speaks of the intense trials that occur in obeying God’s direct authority as well as discussing the difficult issue that all authority is of God, but not all authority is godly. He even specifically tells believers to be submitted to leaders who are “harsh” (1 Pet. 2:18). The word harsh means “crooked, wicked, unfair, and unreasonable.”
I frequently run into believers who say, “I’m submitted to God, but I can’t submit to my pastor (husband, boss, etc.).” Sadly, these are very deceived people. It is God who commands us to be submissive to authorities, even if they are not godly. So in essence, these individuals are not submitted to God. By their actions they prove they don’t trust God.
After discussing trials that result from submitting to God’s authority, whether directly or indirectly, Peter then comes to the end of chapter 4 and in conclusion says, “For the time has come for judgment (a decision for or against…the choosing by the Commander who is fit and who isn’t)  to begin at the house of God.…Therefore let those who suffer according to the Will of God, commit their souls to Him in doing good, as to a faithful Creator” 1 Pet. 4:17-19.
In these days the Lord is searching for men and women who will obey God no matter the cost. They will recognise Divine authority and will be steadfast in their service as the faithful servant Jesus described working the fields of his master. They will be the ones who walk in great faith and do mighty exploits. They will manifest His glory, impacting their neighbours, their city, their nation and the world.