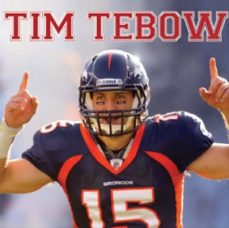 by: Nico Bougas
Hardened secular journalists have admitted that he brings a refreshing new dimension to the sport’s world plagued by scandals, corruption and inflated egos. Tim Tebow is more than just a sports prodigy. He’s a cultural phenomenon. Coming from a Christian home-schooled background, he has drawn the curiosity of the world of sports not only for his extraordinary athletic ability, but for his bold convictions of faith on and off the field. Even his prayerful pose after successful plays have been coined ‘Tebowing’.

What a witness!
Tebow first came into prominence whilst at university in Florida. College football is huge in the USA with thousands attending each game and millions more watching on TV. Tebow took advantage of this interest by painting references to Bibleverses in black swaths under each eye. Amongst his favourites were Phil
4:13, Eph 2:8 and John 3:16. When University of Florida won the College championship in 2009, Tebow had the reference John 3:16 in the final
game and as a result, more than 90 million people googled John 3:16. What a witness!

Compelling statistics
As a result, officials banned all advertising and messages from being painted on the faces of the players. This has now been called the ‘Tebow rule’, which has also been adopted in the professional league. But the impact remains. Even though Tebow was unable to use the Scripture reference, previews and flashbacks to his college days reminded fans of the verse. After an electrifying playoff win against the Pittsburgh Steelers in overtime, John 3:16 was reportedly the most popular search term on the Internet. Remarkably, during the game with all eyes on him, Tebow passed for precisely 316 yards and averaged 31.6 yards per completed pass. The television viewing audience for the last 15 minutes of the game was
31.6 percent. This only added to the mystique as Google reported another
94 million searches within a 24 hour period.So big was the story, in fact, that major news outlets like CNN ran the text of John 3:16 in its entirety: “For God so loved the world that He gave His one and only Son, that whoever believes in Him shall not perish but have eternal life.” The Billy Graham Association took out an advert that provided a link which explained the way of salvation to all those searching John 3:16. Then Focus on the Family took out a TV advert featuring a group of kids reciting John 3:16 entirely.
Taking a bold stand
Tim Tebow has used his fame to the benefit of the unborn, most notably by appearing in a pro-life advert during the Superbowl produced by Focus on the Family last year. This event has the highest viewership of any TV programme. The advert caused some controversy as pro-choice advocates fumed that this was inappropriate advertising at a sporting event. (They would rather promote alcoholic products which ruin lives than an advert that saves lives!).
Born to missionary parents
Tim’s parents, Bob and Pam, moved to the Philippines in 1985 with their four children in order to become missionaries. Today, the Bob Tebow Evangelistic Association continues to minister in the Pacific nation of 92 million. The youngest Tebow – Tim – was born there in 1987. At a recent outreach to more than 20 000 people, Tebow recounted his journey of faith: “I still remember when I was a little boy lying in my bed, and even though I had been to church and devotionals and all sorts of things, I realised that if I was in a car accident and died, I would go to hell.” This sobering reality pierced his young heart and mind. “I couldn’t sleep that night,” he admitted. After tossing and turning in the darkness, Tim got up at dawn and bolted to his parents’ room. “I grabbed my mom and said, ‘I want to ask Jesus into my heart!’ Mother and son walked to the living room, then Tim got down on his knees and asked Jesus to be his Saviour and Lord. “I know from that moment on Iwent from darkness to light and my eternity
was sealed because I had a relationship
with Jesus Christ.” Tim and his siblings, after
they each turned 15,
began travelling
back with Bob
and a mission
team every
year to support the evangelistic
work. During a 2008 trip, Tim spoke
to almost 7 000 citizens in different
locations, and, of those, more than 5 000
indicated that they had made decisions for
Christ.
Ironically, all of Tim Tebow’s ministry
opportunities and football achievements –
even his very life – almost never happened.

Tim was almost aborted…
While living in the Philippines in the mid-80s, Bob Tebow, who was passionate about the preservation of human life, grieved over the number of abortions in
America. He began to pray: “Lord, if you give us another son, I’ll raise him to be
a preacher.” He even prayed over the name ‘Timmy’ – from Timothy, which means “honouring God”. In time, Pam conceived another child. But complications surfaced in the pregnancy and concerned for Pam’s life, her doctor urged her to abort the child. Bob and Pam refused the doctor’s counsel and trusted God for their son’s life. She spent months of her pregnancy confined to bed and, more than once, nearly lost the baby. But on 14 August 1987, against the odds, Timmy was born – healthy, but very skinny. And, now, that early thin stature has become another reason the Tebows consider the quarterback’s current 1.9 metre, 110 kg frame a sign of God’s hand at work and a testament to the power of prayer.
An amazing role model
Tim Tebow doesn’t seek the limelight, the limelight seeks him. The general population is intrigued to find a sports star that means everything he says and matches his words with action. On the first weekend in January, he met with an 8 year old boy who has been fighting cancer since 2008, and now has only a few months to live. His dying wish was to meet Tebow. This happened as reported by Fox News: “Blake, nice to meet you buddy,” said the quarterback. “It’s so good to see you.” Blake was speechless but full of smiles as Tim Tebow gave him his autograph. His mother Miranda has been fighting the battle with her little boy from the very beginning. “It’s a little overwhelming to see it actually happen,”she said over the phone. “Tim just walked
right up to Blake and started talking to
him; I couldn’t believe it was happening!”
13 year old Joey Norris of Washington,
who has been fighting leukaemia, also got
to meet Tebow that weekend. The quarterback
flew Joey out to Denver to see him
play against the Kansas City Chiefs after
Joey tweeted a picture of himself ‘Tebowing
while chemoing’.

Humble and friendly
Then, before the playoff game – a gruelling contest the Broncos went on to win with a touchdown in overtime – Tebow took time to meet with a young lady named Bailey Knaub, who has spent most of her life battling an auto-immune disease, a condition requiring no less than 73 surgeries to date. He also brought her to the big game as his guest. As reported by the Denver Post: “On Thursday, Bailey learned that her dream of meeting Tebow would come true. Her family received tickets to the crucial playoff game, and soon they all were hanging out with Tebow’s parents and all of his brothers and sisters. Then, before the game started, someone said Tim Tebow was headed over to meet Bailey, “I was so nervous, my heart was going a million miles an hour.” Bailey and her older sister, along with their parents Rob and Kathy, spent about two hours with the Tebow family. “Standing firm The rising superstar has taken a strong stand for his faith and shown that he won’t let fame get in the way of his relationship with God. In an interview with ESPN Tebow claimed: “If you’re married, and you have a wife, and you really love your wife, is it good enough to only say to your wife ‘I love you’ the day you get married? Or should you tell her every single day when you wake up and at every opportunity? That’s how I feel about my relationship with Jesus Christ, that it is the most important thing in my life. So any time I get an opportunity to tell Him that I love Him or any given opportunity to [honour] Him on national TV, I’m gonna take that opportunity. And then right after I give Him the honour and glory, I always try to give my team mates praise. And that’s how it works because Christ comes first in my life, and then my family, and then my team.”

Facing opposition and criticism
Of course, Tim Tebow is merely doing what Jesus asks of His followers: “Whoever
acknowledges Me before men, I will also acknowledge him before My Father in
Heaven.” Matt10:32. The problem is that secular humanists don’t want Christ acknowledged before anyone, and they endeavour to shut down or mock anybody who tries. Tim Tebow stands for much of what our post-modern popular culture despises: sexual purity within the bonds of natural marriage, the sanctity of human life, selflessness, charity and humility. Win or lose, one thing is for sure: people will keep talking about Tim Tebow. And when people are talking about Tebow, they can’t help but talk about the profound faith that drives him both on and off the field.
For more info see www.timtebow.com