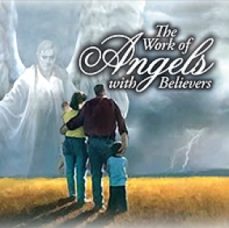 ANGELS ASSIST AND MINISTER TO BELIEVERS
“But to which of the angels has He ever said: ‘Sit at My right hand, till I make your enemies your footstool’? Are they not all ministering spirits sent forth to minister for those who will inherit Salvation?”  Heb 1:13-14
The angels assist us in a way very much like waiters. They fetch and carry. (See also Rev 22:9; 1 Kings 19:5-7; Matt 4:11)

QUESTION: HOW CAN WE BE SURE THAT ANGELS ARE INVOLVED IN OUR AFFAIRS?
Answer: with our words (Dan 10:12; Eccl 5:6; Matt 18:18). Our words often determine the response of Heaven towards us and the resulting circumstances or situation. Pray. The Sword of the Spirit is the spoken Word of God. You bind your angel when you fail to confess the Word. Angels are obedient to God and His Word.

We see that there is no such thing as a silent disciple. We must speak God’s Truth. There is no place for anyone who is ashamed of the Gospel. When soul winning, expect the angels to minister to those you are witnessing to. It is important to remember that angels cannot preach the Gospel – only we can. However, we can ask God for the angels to protect and strengthen those to whom we are witnessing.

ANGELS PROVIDE PROTECTION
“The angel of the Lord encamp all around those who fear Him, and delivers them.” Psalm 34:7
“For He shall give His angels charge over you, to keep you in all ways. In their hands they shall bear you up, lest you dash your foot against a stone.” Psalm 91:11-12
The latter verse was misquoted by satan to Jesus, but is an example to us that angels do protect us, but we must not provoke them or the hand of God to action.
Examples of where angels helped believers include the story of Daniel in the lions’ den. (Daniel 6:22). Note Daniel’s  confession (or the words he speaks). Another example is in Genesis 21:8-21 where we see Hagar and Ishmael protected from thirst. Again read Matthew 18:10 for an example of the work of angels.
In 2 Kings 6:17 we see Elisha shielded from national foes. In Acts 12:5-11 Peter is guarded  from a sadistic government official and in Acts 27:9-44 Paul and his companions were kept from death during  a shipwreck. another instance we see angels at work helping believers is in Acts 5:19 when the Apostle is let out of prison.

ANGELS MINISTER STRENGTH AND ENCOURAGEMENT
“Then the devil left Him, and behold, angels came and ministered to Him.”  Matt 4:11
“Then an angel appeared to Him from Heaven, strengthening Him.” Luke 22:43
Jesus was encouraged and strengthened during His fast.
These Scriptures indicate with clarity that angels do act as ministers of strength and encouragement.

ANGELS MINISTER GUIDANCE AND DIRECTION
God may give guidance in various ways:
Through the Word; the Voice of the Holy Spirit; through dreams, visions, an inner witness (conviction); through circumstances, a word from other people, through the gifts of the Spirit (like prophecy) and through angels.
The following Scriptures detail situations where angels ministered guidance to individuals:

Mary and Mary Magdalene told on the morning of the resurrection to tell the others that Jesus has risen (Matt 28)
Philip told which road to take to find the Ethiopian (Acts 8:26)
Cornelius told to send for Peter (Acts 10)
Paul told that he must stand trial before Caesar. (Acts 27:23-24)

ANGELS HAVE A MINISTRY OF ANSWERING PRAYER
This ministry can be clearly seen in the following two examples: in Acts 12( when the church was praying for Peter’s release from prison) and Daniel 10 (after 21 days of prayer, Daniel’s answer arrives via an angel).

ANGELS HAVE A MINISTRY TO THE DYING – ANGELS TRANSPORT a SAINT’S SPIRIT AFTER DEATH
“So it was that the beggar died, and was carried by the angels to Abraham’s bosom. The rich man also died and was buried.” Luke 16:22  Lazarus’s spirit was carried by angels to Abraham’s bosom. When God’s saints fall asleep in death, the angels escort the spirits to Heaven.

ANGELS PROSPER OUR WAY
Angels work towards prospering the way of believers: “See, I am sending an angel before you to protect you on your journey and lead you safely to the place I have prepared for you.”  Exo 23:20