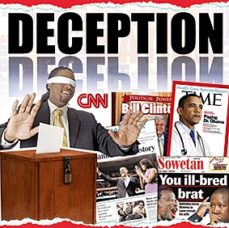 Deception
Last year JOY! published an article I wrote about the increase of deception in the earth and how this relates to God’s people. The Scriptural basis for the article is found in Matthew 24:3-4, “On the Mount of Olives, the disciples came to Him privately, saying, ‘Tell us, when will these things be?’ Jesus…said to them; ‘Take heed that no-one deceives you’.” To illustrate my point, I based my argument on the 2008 US presidential elections and the lead up to Jacob Zuma’s bid for the presidency.

WIDESPREAD IGNORANCE
Tragically, as a result of widespread deception in the Body of Christ, I felt compelled to write a sequel to that article and more importantly, re-iterate the warnings of the Lord Jesus, “Take heed that no-one deceives you”. The Lord placed the responsibility of protecting ourselves from deception squarely on our shoulders. However, I am often devastated by the alarming levels of Biblical ignorance and deception evident amongst Christians. It appears that many are more influenced by the liberal secular media than they are by the Word of God. Key social issues are evaluated on the basis of information obtained from the media. Christians often quote E-TV News, the SABC, CNN, Sky News, the BBC etc., with the same conviction they would Scripture!

THE INFLUENCE OF THE MEDIA
Tragically, the liberal secular media’s influence and ability to advance their godless agenda has increased exponentially as a direct result of increasing deception amongst Christians. Last year I reported on the deceptive media hype that was a key feature of Barack Hussein Obama’s election campaign.

The mainline liberal media establishment in the US virtually deified Barack Obama in their desperate quest to return a liberal to the White House. Most of their reporting was blatantly biased in favour of Obama, lavishing unsubstantiated praise and adoration on a man who lacked any significant political achievement.

UNBIBLICAL MOTIVES
US voters were assailed with meaningless slogans like “Change you can believe in!”, “Yes we can!” and “Hope!” – all of which was calculated to portray Obama as a near messianic figure.

It has now become apparent that the liberal media helped Obama get elected because of his willingness to advance their radical pro-death, pro-homosexual, socialist agenda for America. Incredibly, millions of Christians in the US and around the world bought into the media hype and added their support to this godless agenda.

A MEDIA ‘MESSIAH’
But just one year into the Obama presidency the media deception has begun to unravel. ‘The audacity of hope’ has been exposed as, ‘The audacity of hype’. When Barack Obama entered office, the expectations he and others set for his presidency couldn’t have been higher. Obama announced he was embarking on an ambitious agenda  – to create new jobs, to reform the nation’s health care system, to lessen the world’s nuclear threats and to curb partisan bickering. But as Obama wraps up his first full year in office, the American public has grown increasingly sceptical over his promises to change Washington and his
“yes-we-can” agenda.

Instead of ‘change you can believe in’ the American people got much of the same. In fact, the democratic controlled US Congress approval rating of just 26% is the lowest in decades. A recent NBC/WSJ poll revealed only 35% of Americans are confident the president has the right goals and policies. As the reality of his job set in, Obama’s approval  ratings plummeted to 49% – down from a high of almost 70%

Fed on a steady diet of liberal bias and anti-Christian rhetoric, US voters suddenly discovered their media created ‘messiah’ was just that! The scales fell from their eyes when the senate seat for the liberal democratic stronghold of Massachusetts – occupied for 48 years by liberal icon Ted Kennedy, was lost to a Republican. Obama’s unpopular healthcare overhaul was blamed for this stunning defeat. As the centrepiece of his election campaign, Obama promised a socialised healthcare system that would extend benefits to all, including those who could not afford it.

EXAMINING THE REALITY
‘ObamaCare’ includes tax-funded abortion as a healthcare provision – a move analysts believe is Obama’s payback to America’s largest abortion provider, Planned Parenthood, for their loyal support of his campaign.

However, Republican Scott Brown’s unexpected victory in Massachusetts robbed the Democrats of their 60 seat super majority in the Senate and torpedoed Obama’s chance of fulfilling his main campaign promise. Other failures include his inability to shut down Guantanamo Bay by 22 January 2010. This facility holds some of the world’s most dangerous terrorists and is a bone of contention with Obama’s liberal base.

The failed terrorist attack on a US airline on Christmas Day dashed any hopes of closing down the facility by the deadline. Significantly, the US Economy has proven to be most impervious to Obama’s charms. Despite rousing speeches and promises which included a $787 billion stimulus package, the US Economy is still shedding jobs with little sign of recovery. In addition, Obama’s key objective of getting the Middle East peace talks back on track has hit deadlock. Reports indicate Obama’s cosying up to the Arab world and his hostile and intransigent approach to Israel has seriously undermined his chances of making any headway in that region. The wars in Afghanistan and Iraq grind on with no end in sight.

MARKETING DECEPTION
Obama’s promise to withdraw US forces from war zones within 18 months was dealt a critical blow when he was forced to deploy 30 000 additional troops to Afghanistan to contain the growing threat of a resurgent Taliban. And all attempts to reign in Iranian President Mahmoud Ahmadinejad have proved futile.

What the above does reveal is that Barack Obama’s meteoric rise to the US presidency had little to do with a coherent political strategy and more to do with his willingness to advance the radical agenda of the liberal elite. The reason the Obama presidency is flailing is because it was conceived and marketed on deception. ‘Yes we can!’ has become ‘No we can’t!’ Only a year into the Obama presidency and much has been revealed about the man and his administration. His first order of business after taking office was to reverse the Mexico City Policy, releasing millions of US tax-payer dollars to fund abortions in foreign nations. Obama also refused to address tens of thousands of pro-life marchers in Washington and declined to host the National Day of Prayer at the White House, traditions all his predecessors upheld. He did however, host homosexual activists in June last year declaring it, ‘Gay Pride Month’.

Obama is working diligently to implement a slew of homosexual demands including ENDA, the so-called anti-discrimination Bill that will force faith based organisations to employ homosexuals or face the threat of being shut down.

At the time of writing, hearings were underway in the US Congress to repeal the ‘Don’t Ask, Don’t Tell’ policy that will allow homosexuals to serve openly in the US Military – an extreme social engineering policy championed by Obama that will have serious implications for Military morale.

CONTRADICTORY VALUES
Incredibly, despite Barack Obama’s open hostility to Biblical Christianity and his unswerving commitment to the radical liberal ideology that makes him the most pro-abortion and pro-homosexual president in US history, millions of Christians around the world believe he is a Christian.
But what convinced them? From my study of the Scriptures, I am assured it cannot be God’s Word. The God of the Bible does not condone the murder of the unborn, nor does He provide special rights for homosexuals.

EVALUATING THE FRUIT
Simply put, the reason so many in the Church believe Obama is a Christian is because he said so. I am not judging Barack Obama’s eternal Salvation. Only the Lord knows that. But the prism through which I view all of life is God’s Word. In Matthew 7:15-16, Jesus warns, “Beware of false prophets, who come to you in sheep’s clothing but inwardly they are ravenous wolves… You will know them by their fruits, every good tree bears good fruit, but a bad tree bears bad fruit”. In the case of Christians, the fruit Jesus refers to is the fruit of the Spirit. In other words, a Christian is not a Christian because he claims to be one. Christians are defined by the outworking of the fruit of the Spirit in their lives. Consequently, vigorously promoting policies that lead to the murder of millions of unborn babies across the world and championing the evil political agenda of sexual deviants cannot reasonably be accepted as the manifestation of the fruit of the Spirit.

The primary responsibility of the Church of Jesus Christ is to uphold, defend and protect the Truth of God’s Word. In 1 Timothy 3:15, the Apostle Paul describes the Church of the living God as the “Pillar and ground of Truth”. If Christians compromise the Truth by allowing themselves to be deceived by the latest media fads, there is no hope for the world. After just one year, many who placed their hope in Barack Obama to bring about the change they yearned for have been left empty and disillusioned.

Conversely, nobody whose hope is in the Lord will be disappointed. Christians must remain vigilant and be constantly aware that the liberal secular media harbours a virulent anti-Christian bias which opposes the Truth. As a result, filtering everything we receive through the prism of God’s Word is the most effective way to insulate ourselves from deception.