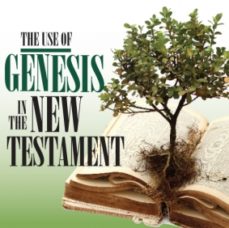 But simply giving a list of references to Genesis proves nothing – we must look at how the New Testament authors used Genesis in order to discern their view. Overwhelmingly, it is presumed to be a historical document; the only place where it could even be argued that it is not necessarily used historically is in the borrowing of Edenic symbols in Revelation to describe the New Jerusalem (depending on one’s eschatological view1). But this is the exception, and in any case, even a symbolic use has an underlying literal reality – the figurative “strong as an ox” would mean nothing unless an ox were literally strong, and the allusion to an Edenic paradise underscores the reality of this pre-Fall world without a curse.

Jesus and the Gospels
Jesus’ use of Genesis sets the tone for how it will be used in the rest of the New Testament. He uses it both to explain doctrine and to draw historical analogies. An example of the former use is in Matthew 22:15–22 (parallels in Mark 12:13–17 and Luke 20:20–36) where the Pharisees and Herodians questioned Him about taxes. For Jesus, because the coin bears Caesar’s image, it is Caesar’s property and should be rendered to him – but He adds the command to give to God what is God’s. In the context, the image on the coin determines who owns it, so specifically what is in view here is that which is in God’s image. Jesus is referring back to Genesis 1:26–27. “In the present, proper humility before God requires the payment of Roman taxes, but if it is true that some of one’s money should go to the Caesar, it is so much truer that all that one is needs to be handed over to the God in whose image one is made.”

John’s Gospel is the most overtly “theological” in that he liberally inserts his own commentary about the meaning of the events he records. Instead of a birth narrative like Luke’s and Matthew, he goes back to creation to begin his Gospel. “In 1:1–5, John traces his account of Jesus farther back than the beginning of the ministry, farther back than the virgin birth, farther back even than the Creation. The account must reach back to the eternal, divine Word, God’s agent in Creation and the fount of life and light.”5 John’s opening “in the beginning” is an unmistakable reference to the opening verse of Genesis,6 but the creation of Heaven and Earth comes in only in v. 3 in John. To understand Jesus’ mission, we have to understand His identity, and to John, He is nothing less than the divine Word who was pre-existent with the Father in the beginning.

1 and 2 Corinthians
The letters to the Corinthian church are good examples of how Paul used Scripture when he was writing to Gentile churches. It is no surprise that Paul refers back to the created order many times. The Corinthian believers are to refrain from sexual immorality because it is improper to join part of the Body of Christ to a prostitute (1 Corinthians 6:12–20). His sole reference to Scripture in support of his argument is a quote of Genesis 2:24. Regarding the issue of head coverings in worship, apparently unconnected to Creation, Paul cites the created order – man was created first, and then woman – in defence of his ruling that men should pray and prophesy with their heads uncovered and women9 should pray and prophesy with their heads covered.
But without a doubt, Paul’s most important use of Genesis is in 1 Corinthians 15, where Paul defends the physical resurrection of the dead.10 His argument, much like his argument in Romans 5:12–21, is that Adam and Christ constitute two heads of humanity. Death came because of Adam’s sin, but the resurrection came through Christ. Because believers are under Christ, believers will also rise. And because Christ rose as a man, we can be sure that our resurrection will be like His; it wasn’t a different sort of resurrection because of His deity. Again, the state of humanity is said to stem from the historical actions of actual people which actually affect those who come after them. And Paul is using this sort of argument to defend one of the cardinal dogmas of the Christian faith, the resurrection, without which Paul says we are without hope!

Other Pauline Letters
Paul’s other letters are sprinkled with references to Genesis; and the vast majority are to the reality of Creation and God as the Creator. This is reiterated in all sorts of contexts, with practical bearing on how the Church conducts itself.

Peter
Peter’s epistles also show a firm belief in a historical Genesis. In 1 Peter he affirms that eight people were saved in the ark, and in 2 Peter he says that sinning angels were sent to Tartarus in close connection with the Flood as a judgement for ungodliness on the earth and saving Noah and his family in the ark. He also affirms that the earth was formed out of water, and was destroyed by water.

Jude
Jude is widely regarded as being very close to 2 Peter, and this one-chapter book has four references to Genesis. Like 2 Peter, he refers to the sinning angels, but this time it’s closely connected to the strange-flesh perversions of Sodom and Gomorrah. He also accepts Genesis 5 as a strict chronogenealogy without gaps, since Enoch is “seventh from Adam”.

Conclusion
It would require a book-length study to examine all the New Testament references in the depth that they deserve, but this brief overview should show how important a historical view of Genesis is for New Testament interpretation. It should also be noted that simply giving references to Genesis does not give the full picture – there are many doctrines which make no sense apart from their foundation in Genesis, and much of the New Testament teaching makes no sense unless one assumes that foundation.