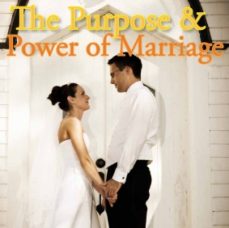 By Myles Munroe
In many people’s eyes the institution of marriage has become irrelevant. Honour, trust, faithfulness and commitment seem old-fashioned and out of touch with modern society. This confusion over marriage should not surprise us, considering the bewildering barrage of worldly attitudes that hit us at every turn. Magazines, movies and television soap operas bombard us with images of adultery and perversion. The question is: Is marriage still viable in modern society? Is marriage still a good idea?

Marriage is God’s idea
Marriage is still a good idea because it is God’s idea! He created it. He established it and defined its parameters. Contrary to contemporary thought, marriage is not a human concept. God instituted marriage at the very beginning of human history. God’s design for marriage is found in Genesis 2:24 “For this reason a man will leave his father and mother and be united to his wife, and they will become one flesh.” ‘One flesh’ is not simply the ‘glueing’ of two people together but rather the ‘fusion’ of two distinct elements into one. They become inseparable. A man and woman who have become ‘one flesh’ under God’s design for marriage cannot be separated without suffering great damage or even destruction. It would be the spiritual equivalent of having an arm or leg torn from their bodies. Jesus said in Mark 10:5-9: “Therefore what God has joined together, let man not separate.” If marriage were of human origin, then human beings would have the right to set it aside whenever they chose to do so.

It is not who you love, but what you love
Success in marriage does not depend on spouses committing themselves to each other as much as it does to their committing themselves to marriage, the unchanging institution into which they have mutually entered. People change constantly as they grow and mature and these changes can be unnerving and frustrating and can easily ignite conflict. Marriage is a steady, unchanging institution and respect for the honourableness and stability of marriage can give a husband and wife a solid anchor that enables them to weather the storms of change. The Bible says that marriage should be esteemed above other institutions. “Marriage should be honoured by all…” Heb 13:4. ‘Honourable’ translates the Greek word ‘timios’ which also means ‘valuable, costly, honoured, esteemed, beloved and precious’. There are times when we say something hateful or do something foolish, leaving our spouse hurt or angry. Holding our marriage in high honour and esteem will carry us over those bumpy times when one or the other is unlovable or difficult to honour. We need to know why we love the person we do. The person we marry is not the person we will live with, because that person is changing all the time. No matter how much you love, honour and esteem each other, that alone might not be enough in the long run. Respecting and esteeming the honourability of marriage as an unchanging institution, will bring stability to our ever-changing relationship. People change, but marriage is constant.

Marriage is bigger than the two people in it
The institution of marriage is more important than our personal feelings. There will be times when we will not be in agreement with our spouse, but that has nothing to do with the marriage. We must never confuse our personal feelings or conflicts with the institution of marriage. Marriage is perfect, while we are imperfect. Commitment to the marriage, rather than commitment to the person, is the key to success. Marriage is bigger than the two people in it, which is the way it should be. God instituted marriage; it belongs to Him, not us. Marriage is two imperfect people committing themselves to a perfect institution, by making perfect vows from imperfect lips before a perfect God.

DIvorce is not the answer
Once we understand that marriage is an institution to be respected and esteemed, the thought of divorce never enters our minds. We don’t abandon marriage because of conflicts or problems that arise. When problems arise in a marriage relationship, many people think that their problems will go away if they just divorce. This is simply not the case. Marital difficulties are almost never one-sided. If you bail out » of the marriage before resolving the issues, then whatever problems you brought into that relationship you will carry into the next one. They may take a different shape, but they will be the same problems. Biblical concepts of marriage and the family have come under strong attack over the past couple of generations. Where before there was social and moral stigma around divorce, now it is commonplace and acceptable. This is true for many believers as well.

Dangerous ignorance
Human civil government possesses neither the authority nor the power to disjoin a God-ordained marriage between two believers. Marriage that God has sanctioned cannot be broken by the decree of men. If believers come to the altar for God to join them together, why then do so many of them go to the court to get ‘un-joined’? Human courts have no power to separate what God has joined. God-style marriage is a fusion, not a bonding. What God has joined, He alone can put asunder. He won’t do it, however, because to do so would violate His own standards. A successful marriage depends on knowledge. A successful marriage has little to do with love. Love does not guarantee success. Love is important for happiness in a marriage, but by itself cannot make a marriage work. The only thing that can make a marriage work is knowledge. Success depends on how much we know, not on how much we feel. Even the Church, which should be the voice of authority on the subject of marriage, is suffering because many believers, including leaders, are Biblically illiterate where marriage and the family are concerned.

Knowledge of the word
When our values are being constantly challenged, both within and without the Church, many people are confused, uncertain of what to believe anymore. In Hosea 4:6 God says, “My people are destroyed from lack of knowledge.” The greatest knowledge of all is to know God. Proverbs 1:7 says, “The fear of the Lord is the beginning of knowledge, but fools despise wisdom and discipline.” It doesn’t matter how often we come to church or how often we worship the Lord, without knowledge we have no guarantee of success. Success in marriage depends on more than just being saved. It takes more than just being in love. Being a believer and being in love are both important in marriage, but they carry no automatic guarantee of marital success. We need knowledge of Biblical principles, the design parameters that God Himself established. Biblical principles will never change. They are universally applicable in every age and in every culture. Trouble comes when we violate or ignore these principles. Marriage is honourable. The institution of marriage is subject to the rules, regulations and conditions that God has set down and He has revealed them in His Word.

Guaranteed success
God designed marriage for success and only His counsel can make it successful. No-one is better at making something work than the person who designed it. God ordained marriages and only He can make it work. If we want our marriage to be honourable and successful, we must know, understand and follow the principles that God has set out in the Bible.

This article is based on the book: ‘The Purpose and Power of Love and Marriage’ by Dr. Myles Munroe. Published by Destiny Image.