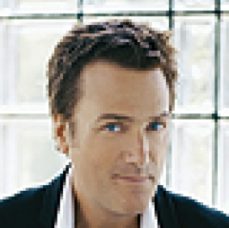 Michael W Smith – 25 Years of Worship
Michael W. Smith is often credited with shaping the entire Christian Music Genre. He is a Grammy Award-winning singer-songwriter, musician, composer and actor. Throughout his 25 years of recording, he has sold over ten million records and performed thousands of concerts for millions of people. He wasn’t always a Christian though and his testimony often suprises friends and fans alike.
Born on October 7, 1957 to Paul and Barbara, Michael Whitaker Smith was raised in West Virginia. His father was an oil refinery worker and his mother a caterer.  Michael was a keen baseball player (his father played in the minor leagues), though his interest in music was just as strong. He learned to play the piano at an early age, sang in his church choir and at the age of ten, had “an intense spiritual experience” that led to his becoming a devout Christian.
Michael then became involved in a Bible study and found a group of older friends who shared his faith. When many of his Christian friends moved away to college, Michael began to struggle with feelings of loneliness and alienation. After graduating from high school, he gravitated toward alcohol and drugs and later attended university for a few semesters while developing his songwriting skills. He also played with various local bands and eventually at age 21 moved to the Country Music capital, Nashville, to pursue a career in music.
Once there, Michael took a job as a landscaper to support himself and at night played with several local bands in the club scene. Sadly, because of these influences, Michael developed a problem with substance abuse. “I really started losing touch when I moved to Nashville. I was smoking marijuana, drinking, doing some other drugs; just being crazy, you know. My mom and dad knew what I was doing. But they never hassled me – they just prayed for me. I felt convicted by God and every time I’d wake up I knew: This isn’t me. But I couldn’t change myself.”
In November 1979, Smith suffered a breakdown that led to his recommitment to Christianity. The next day he auditioned for a Christian group, Higher Ground, as a keyboardist and got the job. It was on his first tour with Higher Ground, playing mostly in churches, that Michael was finally able to put the drugs and alcohol behind him.
Several years later Michael began touring as a keyboardist for Amy Grant eventually becoming her opening act. In 1983 Michael recorded his first Grammy nominated solo album and co-wrote a few songs with his wife, Debbie (with whom he has five grown up children and two grandchildren).

By the time Smith’s second pop album was released in 1984, he was headlining his own tours and over the years has recorded instrumental, pop, worship, Christmas and live albums.
After the September 11, 2001 attacks, Michael wrote a song entitled ‘There She Stands’. He performed this song live for the 2004 Republican National Convention and cites George W Bush as a personal fan and family friend.
Not content with just making music, Michael owns a teenage ‘Christian’ nightclub, has acted in several Christian movies and co-founded New River Fellowship Church with his wife. They pastored the church in 2006 but handed over leadership in 2008. Known for being warm and well humoured, Michael is actively involved in volunteer service and charity work.
At age 52, energetic Michael shows no signs of slowing down. In fact, though he could certainly afford to, retirement isn’t in his vocabulary. “I could never be one of those people who sits back on their laurels and says, ‘Yep, that’s me done. I’m ready to go live on a golf course in Florida and prune the roses’. Not that I am saying there is anything wrong with that, but personally I know God has more for me and I want to live my life to the full.”
True to his mission, Michael recorded his third live worship album ‘A New Hallelujah’ at Joel Osteen’s Lakewood Church in Texas last year along with 12 000  worshippers.  According to Michael, “The atmosphere was electric. Everybody who showed up came for the purpose of worshipping God wholeheartedly. It was a life-changing experience for many people and one of my most anointed recordings.”
With this album, Michael says he desired to encapsulate a ‘global’ feel to the worship – reflecting his experiences of worship all over the world. “For ‘A New Hallelujah’, I included the African children’s choir, which gave it the universal feel I was hoping for. This album was heavily influenced by my travels overseas – Paris, Denmark, Holland, SA, Brazil, South Korea, Kenya –  where I worshipped with locals and sensed an urgency of intense worship in these countries. It was very inspiring for me, and for this reason I wanted every nation to listen to this music and relate to it.
“I am passionate about praising God and strongly believe that worship is a lifestyle; in fact, music is just a small part of worship. Just look at warriors in the Old Testament – they didn’t go out with the army first, they sent the musicians out. And many, many wars were won because the music confused the enemy, although they were outnumbered.
“In today’s time, I think that as individuals and as churches – and I’ll go off the deep end here – we’ve got to reach out to our communities. We’ve got to get involved in taking care of the poor. I think if the Church did what they were supposed to do, we wouldn’t have anyone sleeping on the streets. Yes, it’s hard work and hard to figure all of it out. But I think that’s an act of worship that touches God’s heart. We’ve got to get involved and reach out to the communities, be more evangelical and bring people into the Kingdom. That’s what it’s all about.”
The industry talk, and of course CD sales, bear witness to the success of this album in capturing God’s heart for worship and in February, the much anticipated concert DVD will be available in stores.
With a home full of awards and accolades, Michael says his most cherished treasures are not in the form of gold statues or framed platinum albums. His treasures are his family. “I’ve been married for 27 years and I’ve never been more in love. My kids are doing great. Not that we don’t have struggles like everyone. There are trials and tribulations and things that come along and you go ‘whoa’…but it’s all part of life. But I if I look at the big picture and look at my family, I go, ‘Wow God!’
“Though I am so grateful for the success the Lord has given to me, I’ve always said it’s none of my own doing. All of us are blessed to be a blessing. I want to be remembered as a God-fearing man who loved his wife and kids well and who was fruitful in building God’s Kingdom. That’s what I would hope and pray would be on my tombstone.”