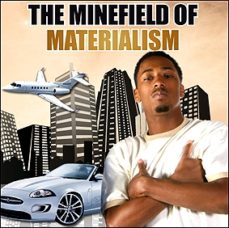 The Minefield of Materialism
Like many young couples, my wife Linda and I survived on a very modest income during the early years of our marriage. Living paycheque to paycheque was an unavoidable way of life. The first two years were especially difficult. We were poor but happy. We were actively involved in our local church, we kept a clean apartment and – most importantly – we had each other. Several years ago, our financial woes came to an abrupt end.

Blessings or curses?
I said good-bye to teaching and began a career in business. Suddenly, I went from R120 000 a year to R240 000 – with a company car! At the same time, my wife graduated and began full-time employment of her own. In a matter of a few weeks, the Pearson family income increased by 150%.

Living in yuppie heaven
And, as often happens with individuals and families that fall into the materialistic trap, along with that extra income came the inner sense of urgency to begin spending it. My first indulgence was a brand new car. Purchasing it created powerful feelings of upward mobility and worth. I washed it every day and waxed it once a week. When I drove it, I felt the “scraping by” life we had known disappearing in my rearview mirror.

I was in yuppie heaven. But, without realising it, my spiritual life had taken on water. My commitment to Christ – my burning zeal for being His faithful disciple, had cooled. I still believed the same doctrines, but my day-to-day living reflected a different doctrine – a doctrine of prosperity, entitlement and materialism. The things of this world were more important to me than the things of God. The contentment we had known in the early years had been replaced by a perpetual desire for more and better. I was living a weak Christian life and digging myself deeper into the ditches of wants, things and stuff.

Fortunately through the Grace and power of the Holy Spirit, I was humbled and deeply challenged when I spent a few months in a men’s fellowship group and learnt from their example how to live Godly prosperous lives – and not be controlled by possessions. Only a few years before, I had felt I’d arrived. But now I was remorseful over where I had ended up.

Your money or your life
One of the frequently voiced misconceptions about money and possessions is that they are evil and to be renounced and despised. If God has blessed you with a large amount of this world’s goods, that in itself does not mean you’ve become a victim of materialism. Where the line is crossed is when the wealth and possessions you have become more important to you than the things of God.

“No one can serve two masters. Either he will hate the one and love the other, or he will be devoted to the one and despise the other. You cannot serve both God and Money.” Matt 6:24. According to Jesus in this Scripture, someone will get cheated. Either you will cheat your devotion to God by giving your desire for the nice things pre-eminence in your life, or you will cheat your commitment to materialism by wholeheartedly following God – which often involves sacrifice, giving, simplicity, and servanthood.

Where your treasure is…
How many of us have lain awake at night, scheming to get that set of new golf clubs, that Lexus, or that key to the executive washroom? How many of us have told ourselves, “Life would be perfect if I had …” How many of us have found ourselves precariously balancing on ethical lines, reaching for something that will stay out of our grasps unless we step over those lines?  For the Christian in the market place, materialism is a subtle danger. It’s not as obvious as stealing or sleeping around, but it’s no less lethal to your emotional, relational, and spiritual lives.

Stewardship or ownership
No matter how little or how much you possess, God owns it all. To combat materialism taking root, you need to realise you are a steward of God’s property. If  you’re trying to evaluate your life based on what you own, you’ve already set yourself up for failure, because the concept of ownership is built on a foundation of sand. You don’t really “own” anything. Everything you have in your possession belongs to God. When we cling to attitudes of ownership and thus entitlement, our flawed perspective stretches to how we view giving back to God. Sometimes Christians think that because He owns the first 10% (a tithe), then the other 90% must belong to them. The purpose of the tithe is not to create a profit-sharing plan with God. God is interested in how you manage all He’s given you. We can avoid stepping on the landmine of materialism if we see ourselves as stewards of all we have rather than owners. “The earth is the Lord’s, and everything in it, the world, and all who live in it.” Psa 4:1

Don’t live above your means
Living a life on credit and borrowing money to acquire more, is a terrible trap of materialism. Recognising the tendency to compete with the Joneses, some credit card companies have devised commercials that play off and encourage this urge – that most people are motivated to success by the envy of their neighbours. As Christians we have to get our priorities straight and store up treasures in Heaven and not on earth. God discourages debt; notice I didn’t say “God prohibits debt.” He doesn’t. But debt will leave you bound to others and not free to do the Will of God.

Availability versus unavailability
People who are over extended financially, vocationally, and recreationally do not make themselves available to serve God. As you consider what I’ve written so far about stewardship, contentment, and availability, ownership, credit, and unavailability, how do you understand Jesus’ words in Luke 14:16-24?

The invited guests mentioned in the parable of  the feast, were more interested in other pursuits than they were in attending the great banquet. By their commitments to their own agendas, they made themselves unavailable for the party. Contrast this unavailability with God’s challenge in 2 Chronicles 16:9: “For the eyes of the Lord range throughout the earth to strengthen those whose hearts are fully committed to Him.” If our hearts are consumed with keeping up with the Joneses or building a bigger bank account, God will consider us unavailable for His use and His strengthening.

God, in His Grace, gives you much in this life and He expects you to take care of it without getting attached to it. In the words of Joe Stowell, “The real point of materialism is not how much we have, but what has us.”