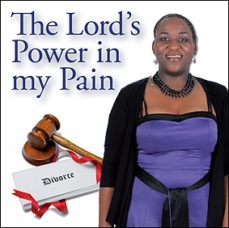 Trouble often hits when we least expect it. We can stumble into a pit and face a terrifying darkness…What do you do when your worst nightmare becomes a reality? Let me tell you my story of trouble and transformation.

My dream starts
In 1990, as a young girl of twenty, I got married to a darling man. We lived in Butterworth (Eastern Cape) for the first two years, after which we moved to Lusikisiki where I got a teaching post. My husband worked in Umtata, but he came home every weekend and sometimes even during the week. For eight years everything in our marriage went well – I was sure we had made it! We even had two beautiful, active children.

A warning in my heart
One day, my husband asked me to start searching for a house to buy in Margate. As we were preparing the selling of our house (which a colleague bought), I noticed one day that the number plate of our car had changed. I questioned my husband about this and he answered that he wanted to change the car’s registration number to an Eastern Cape number plate, as it formerly had a Kwazulu-Natal registration plate.

Strange signs
‘Okay…’,I thought, but a feeling of apprehension stirred in my heart. During the June holidays of 1998, my husband encouraged me to take the kids on a holiday to my mother’s place in Ngqamakwe (Eastern Cape). After a week, he came back to fetch us. As we were driving back, he told me that the transfer for the house sale has gone through and that he had to take all our belongings to his father’s place and some of our possessions to his sister’s place. Once again I felt an uneasiness in my heart…but I trusted my husband.

The nightmare begins
Due to the house being sold, I had to move into a one bedroom flat with our two children as an interim measure. Somehow, through all of this, I still thought all was ok. But on my birthday, 23 July (two weeks after returning from the holiday with my mother), my husband called me and asked for a divorce! It was the beginning of a frightening nightmare – I suddenly had nothing. Even the car I was driving (the one that mysteriously got an Eastern Cape number plate) had been transferred into his brother-in-law’s name.

I was left with only the possessions I had in my tiny room. I also found out he had been living with another woman during the week, only to play innocent over the weekends when he came home from Umtata. I lost my friends, my dignity and even my personality. Worst of all, I lost all hope. During this time I developed painful stomach ulcers and I struggled to sleep.

Even the medication that a doctor prescribed could only give me temporary relief from my pain. One day, when I went back to the doctor, he told me that he also suffered from insomnia, but that after he was born-again, sleepless nights were something of the past. Looking back now, a seed was planted inside my heart that day. That evening, I flushed my sleeping pills down the toilet.

God gave me a new start
Soon after my ordeal, a friend invited me to Lusikisiki Christian Church. When an altar call was made, I lifted my hands and surrendered my life to the Lord. And do you know what? God restored everything I lost! “He lifted me out of the slimy pit. He set my feet on a rock. He put a new song in my mouth.” Ps 40:2

God blessed me with a new car and a beautiful house in East London – right next to the beach! But that is nothing compared to the new song I have in my heart. “My heart is happy, because [He has] saved me.” Ps 13:5. After I gave my life to Jesus, the first thing I was taught by my new spiritual parents, Pastor Martin and Pumza Mwape, was forgiveness. I forgave my husband and gave him a call. I told him that after all he had done, I chose to forgive him.

I was free! My walk with God had truly begun! Today I am a successful businesswoman for IFA Business Opportunity (a division of Clientele life). I even appear on the IFA infomercials! God is indeed always at work for the good of those who love Him (Rom 8:28).

I know there will still be hard days, but as I child of God I have learned this valuable lesson: “Together they will wage war against the Lamb, but the Lamb will defeat them, because He is Lord over all lords and King over all kings, and with Him will be His called, chosen and faithful followers.” Rev 17:14