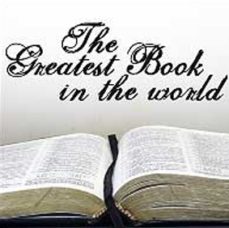 The Greatest Book in the World

The Bible has inspired the greatest literature, art, achievements of architecture (the cathedrals), the age of exploration, world missions, the rule of law, the separation of powers, checks and balances, representative government, the sanctity of life and so much more.

It is to the Bible that we owe our legacy of the rule of law.  It is the Bible that ushered in an era of compassion, charity, liberty and justice.  The Ten Commandments are the moral and legal foundation of Western civilisation.

Most of the world’s languages were written down by Christian missionaries.  The first book in most languages in the world was the Bible.

Educationalist Noah Webster declared: “The Bible is the chief moral cause of all that is good, and the best corrective of all that is evil in human society; the best Book for regulating the temporal concerns of men, and the only Book that can serve as an infallible guide…the principles of genuine liberty, and of wise laws and administrations, are to be drawn from the Bible and sustained by its authority…”

Even Napoleon Bonaparte admitted: “The Bible is no mere book, but a living power that conquers all that oppose it.”

The Foundation of Modern Science
All of the great pioneer scientists who laid the foundations of modern physics, astronomy, calculus, dynamics, oceanography, anesthesiology, and every other branch of science, confirmed the Bible as the foundation and inspiration for their work.

Sir Michael Faraday, one of the greatest scientists of all time, who discovered electromagnetic induction and invented the generator, observed: “The Bible, and it alone, with nothing added to it nor taken away from it by man, is the sole and sufficient guide for each individual, at all times and in all circumstances…Faith in the Divinity and work of Christ is a gift of God, and evidence of this faith is obedience to the commandments of Christ.”

The Rule of Law
The foundations of the Common Law were made by King Alfred the Great of England who introduced his code with the Ten Commandments, the Case Laws of Exodus, The Golden Rule of Christ and other Biblical principles.

The Magna Carta of 1215 was the first statute, the first written restriction on the powers of government.  It was written by a pastor and thoroughly saturated with Scriptural principles.

The Bible, New Testament, or at least Gospels, have been published in over 2,300 different languages worldwide.

Incomparable
There is no other book that can compare to the Bible in value, inspiration, importance and the amount of languages into which it is translated.  No other book could compare with the Bible’s worldwide impact throughout history. Yet, the Bible is also the most attacked book in all of history.  From the time of Nero, and throughout the ten waves of persecution by Imperial Rome to Diocletian, the Romans made successive attempts to eradicate all Bibles.  Yet, despite the waves of repression by Rome and the destruction unleashed by the Barbarians and the Vikings, and intensive campaigns of persecution such as under Stalin’s Soviet Union and Mao Tse Tung’s Red China, the Bible remains the best attested to book in antiquity.  Over 1,700 Hebrew manuscripts of the Old Testament still exist.  And there are over 5,000 Greek manuscripts for the New Testament, 8,000 Latin and 1,000 other ancient versions of the New Testament in existence.

As Dr Martin Luther declared: “It is a miracle how God has so long preserved His book!  How great and glorious it is to have the Word of God!”

The Prince of Preachers, Charles Spurgeon, declared: “Nobody ever outgrows Scripture; the Book widens and deepens with our years.”

Noah Webster taught: “…all the miseries and evils which men suffer from – crime, ambition, injustice, oppression, slavery and war – proceed from their despising or neglecting the precepts contained in the Bible.”

R.A. Torey said: “The truly wise man is he who always believes the Bible against the opinion of any man.”

Scientist John Newton declared: “I will put down all apparent inconsistencies in the Bible to my own ignorance.”

The author of the great Webster’s dictionary, Daniel Webster, observed: “If we abide by the principles taught in the Bible, our country will go on prospering and to prosper; but if we were to neglect its instructions and authority, no man can tell how sudden a catastrophe can overwhelm us and bury our glory in profound obscurity.”

The Bible is the Word of God
Almost every page of the Bible contains words such as: “The Lord said…”, “God spoke”, “The Word of the Lord came…”.

The Gospel accounts are based on careful research, historical facts and eyewitness testimonies. The physician Luke introduces his Gospel account with these words: “They were handed down to us by those who from the first were eyewitnesses and servants of the Word.  Therefore, since I myself have carefully investigated everything from the beginning…to write an orderly account…so that you may know the certainty of the things you have been taught.”  Luke 1:2-4

“No prophesy of Scripture came about by the prophet’s own interpretation.” 2 Pet 1:20

“All Scripture is given by inspiration of God, and is profitable for doctrine, for reproof, for correction, for instruction in righteousness.  That the man of God may be complete, thoroughly equipped for every good work.” 2 Tim 3:16-17

Overwhelming Evidence
We cannot accept the authority of our Lord Jesus Christ without accepting the authority of the Old Testament which He lived, taught, appealed to and fulfilled.  We also need to recognise that the Lord Jesus carefully chose and trained certain men to be His Apostles.  He gave them a special anointing with the Holy Spirit (John 20:21; Acts 1:8).  He promised to send them the Holy Spirit to guide them into all Truth.  Jesus taught that His Words have a unique power and life (John 6:63; 15:3); His Words would never pass away (Mark 13:31) and His Words must be heard and obeyed (Matt 5:17-48; 7:24; John 8:31-38; 14:23).

We can also appeal to fulfilled prophesy.  During His life on earth our Lord Jesus fulfilled over 300 Old Testament prophesies.

Archaeological discoveries, manuscript and historical evidence support these internal evidences to the accuracy and uniqueness of the Bible.

Most convincingly of all, we can point to the unique impact of the Bible on millions of lives throughout the centuries, and now on our own lives, too.

Now, some sceptics may not believe that the Bible is the Word of God, but they have to ignore a lot of accumulative evidence to do this.

The Power of God’s Word
The Bible is:
·   The source of Truth: “Sanctify them by Your Truth; Your Word is
Truth.” John 17:17
·   The source of God’s blessings: “Blessed are those who hear the Word
of God and  obey it.” Luke 11:28
·   A source of power: “For I am not ashamed of the Gospel of Christ, for
it  is the power
of God for the salvation of everyone who believes…” Rom 1:16
·   The source of Spiritual guidance: “Your Word is a lamp to my feet and a
light to my path.” Ps 119:105
·   Infallible: “The Law of the Lord is perfect, converting the soul; the
testimony of the Lord is sure, making wise the simple.” Ps 19: 7
·   Inerrant: “Every Word of God is pure; He is a shield to those who put
their trust in Him.” Ps 30:5
·   Authoritative and final: “For ever, O Lord, your Word is settled in the
Heavens.” Ps 119:89
·   Complete: “For I testify to everyone who hears the Words of the
prophesy of this book; if anyone adds to these things, God will add to
him the plagues that are written in this Book; and if anyone takes away
from the Words of the book of this prophesy, God shall take his part
from the Book of Life, from the Holy City, and from the things which are
written in this Book.” Rev 22:18-19

The Bounty’s Bible
On 28 April 1789, Fletcher Christian staged the most famous mutiny in history on the English ship HMS Bounty, in the South Pacific. The captain, William Bligh, and those loyal to him, were set adrift in an overloaded lifeboat which they miraculously navigated across the Pacific Ocean 3700 miles to Timor.

The mutineers on the Bounty immediately began quarrelling about what to do next.  Fletcher returned to Tahiti, where he left some of the mutineers, kidnapped some women, took some slaves and travelled with the remaining mutineers 1,000 miles to the uninhabited Pitcairn Island.  There the group quickly unravelled.  They distilled whiskey from a native plant.  Drunkenness and disorder characterised their colony.  Disease and murder quickly took the lives of each of the men, including Fletcher.  Soon only one man was left – Alexander Smith – and he was surrounded by an assortment of women and children on the island.

Then Smith found the Bounty’s neglected Bible.  As he read it, his heart was transformed and he began to instruct the survivors of their community.  He taught the Scriptures and helped to implement its instructions.  The message of Christ so transformed their lives that, 20 years later, in 1808, when the crew of the Topaz landed on the island, they found a joyful society of Christians living in peace and prosperity, free from crime, free from disease and without murder and mutiny.