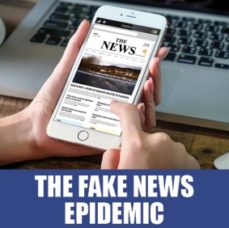 We now live in a ‘post-truth’ society. The adjective ‘post-truth’ was Oxford Dictionaries’ Word of the Year for 2016. It relates to ‘circumstances in which objective facts are less influential in shaping public opinion than emotional appeals’.
Casper Grathwohl, President of Oxford Dictionaries, said that the term’s rocketing popularity is ‘fuelled by the rise of social media as a news source and a growing distrust of facts offered up by the establishment.’ He suggests that it will become one of the defining words of our time.
As Grathwohl implies, the term ‘post-truth’ is closely connected with the deluge of ‘fake news’ we have experienced. Jonathan Freedland writes, ‘In this era of post-truth politics, an unhesitating liar can be king. The more brazen his dishonesty, the less he minds being caught with his pants on fire, the more he can prosper. And those pedants still hung up on facts and evidence and all that boring stuff are left for dust, their boots barely laced while the lie has spread halfway around the world’.

…Pick up a copy of our November issue for the full article, on sale now!