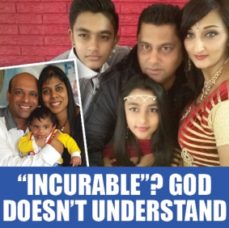 Although many Christians experience the most amazing healings, it seems easier for Hindu’s, Muslims, even atheists to get healed. In my monthly miracle crusades, they are often the first to testify on the stage. We also get many miracle reports weekly from them via my various TV programmes. Why is this so? Mature Christians often become sophisticated thinkers, strongly opinionated and indoctrinated by various teachings, yet an unbeliever or baby Christian, with child-like faith, believes God at His Word.
Suppose I said that we can walk on water because Jesus said so. Some Christians would be angry with me for teaching a “false doctrine”. Others would insist that dispensation is over. Some would comment on how someone attempted it and drowned. Some would declare that they would only do it if God personally told them to, while others would point out how this is a once-off action pointing to a deep Biblical revelation that I am ignorant of, yet a baby Christian would simply believe the word and declare – “Let’s do it”.

…Pick up a copy of our November issue for the full article, on sale now!