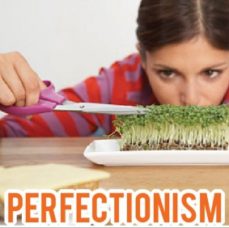 Perfectionism and the drive to perform may seem to be a positive characteristic, but it is a major disease-maker. We can be driven into performance and perfectionism in childhood when our families make us feel loved based on our achievement.
Perfectionism is an attempt to feel loved and complete through works. The basis of love for these people is what they do, not who they are. Who you are as far as God is concerned is not what you do – your value and worth is based on who you are in Christ.
But in today’s society your identity is in your achievements. We are such an image-
orientated and success-driven society, whereby if you don’t measure up to the ‘survival of the fittest’, you are a cast away.
For example children that achieve academically or in sports at school are praised and applauded, whilst those who don’t are pushed aside. If you are not careful as parents, you are going to put your children into a strait jacket of performance and perfectionism because with all your best intentions you want them to win and to be the best – meanwhile they are suffocating in fear.

Let kids be kids!
Children are exposed to excessive levels of stress when you try to make them do too many activities – school and sports all day, plus one extra lesson after the next. Research has shown that if you try to push your children and force them to speed through their academics quicker than they are designed to do, you actually decrease their intelligence through stress because it impairs the functioning of the brain.
Our children are paying a very high price due to the pressure to perform. I encourage parents to allow their children to be children! They are little, they are supposed to be playing in the rivers and in the sand etc.

The fear of failure
The problem with performance and perfectionism is that it causes a fear of failure because there is no allowance for weakness. This is not from God; 2 Corinthians 12:9 says that His strength is made perfect in our weakness.
Proverbs 24:16 says though the righteous may fall seven times, the Lord shall lift them up! God doesn’t expect a perfect performance from us. We don’t have to be perfect – we can make a mistake and it might be the beginning of our learning process on the way to success.

Excellence versus perfectionism
There is a difference between excellence which is a Godly mind-set and perfectionism which is a toxic disease-making mind-set. We were not created to be lazy or mediocre people. As God’s children who represent Him, we need to be people of excellence who are motivated by love – whatever you do, you do it to the best of your ability because Colossians 3:23 says “whatever you do, do it heartily, as to the Lord and not to men”. But doing your best doesn’t mean that it has to be flawless or perfect – that is perfectionism and it is driven by the fear of failure because you are afraid that you won’t be good enough.

The problem with making no allowance for weakness
When you make no allowance for weakness, you become your own worst enemy because when there is a weakness (and there inevitability will be since all of us are human and none of us are perfect), you feel bad about yourself. As a result you succumb to guilt and self-loathing and you won’t forgive yourself. There are many diseases that come out of this mentality:

Type 2 Diabetes
When you are driven into performance and perfectionism, fear puts your body into a toxic state of stress where there are high levels of the stress hormones called cortisol and adrenalin in the blood. Cortisol and adrenalin can block the effects of insulin. Insulin is a hormone that controls your blood sugar levels. So when insulin is blocked by these stress hormones, the sugar levels in the blood rise and become too high and you get the symptoms of Type 2 Diabetes.
Chronic Fatigue
One of the most common complaints we hear in a doctor’s office is “I’m always tired.” Chronic fatigue syndrome is where you are always tired and this is not due to a lack of sleep, a hard day’s work or due to another illness. Chronic fatigue syndrome is due to pressure to meet the expectations of somebody (usually a parent, especially a mother) in order to measure up and receive love and acceptance. It afflicts individuals who spend all their life being what somebody else expects them to be.
This is often called the “white collar disease” because it usually hits professionals when they are at the peak of their careers. After they have achieved what they were supposed to achieve to meet the expectations of somebody, they crash. As they crash, another toxic mind-set which is a low self-
esteem, guilt, self-loathing and self-accusation comes – and this triggers hypoglycaemia (where your blood sugar levels drop). As a result your brain does not get the energy that it needs, and you experience fatigue and ‘brain fog’.
There was a lady in Florida who was diagnosed with chronic fatigue syndrome plus five other diseases at the height of her success as a real estate agent. When she was growing up she wanted to be a school teacher because she loved children. But in her family there was pressure from her mother to enter real estate because that was where the money was. At the height of her successful career with a six digit figure income, she crashed with disease and could no longer work because she hated her job. She wanted to be a teacher! At the height of pleasing her mother, she crashed in guilt, performance, fear and self-loathing.

Alzheimer’s Disease
The mind-set behind Alzheimer’s disease is similar: this involves the fear of man where the person has spent his (or her) life performing for others. The person has a fabricated personality which he allowed to be formed based on the expectation of others. As a result the person has self-accusation and guilt because he lacks personal identity where he does not know who he really is.
There are many people who don’t even know who they are because since childhood they have been so busy conforming to the expectations of their parents and others. They’ve forgotten that they had an identity from God since before the foundation of the world and they don’t know what it is. Well why don’t you go ask Him?

Be set free to be who God created you to be!
Quit being what other people expect you to be and be who God created you to be! Follow your heart and don’t let anybody stop you and these diseases will leave you in conjunction with that decision. You need to separate your ‘who’ from your ‘do’. God’s love for you is not performance-based and you need to see yourself as the Lord sees you. 

Dr. Michelle Strydom founded Eagles’ Wings Ministries. Enquiries for her materials (Books and DVDs), please contact Charmaine: 082 920 7826082 920 7826 / cj.eagleswings@gmail.com. See our website for a free article on how to build a healthy self esteem based on who you are in Christ.”