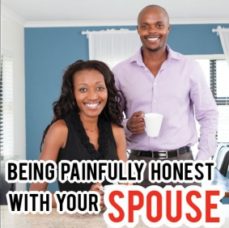 If it’s true, it’s true,” Brian said confidently during a recent Marriage Intensive Course. He looked sternly at his wife, Julia.
“I just believe in saying it the way it is,” he continued confidently. “And what’s more, I think she ought to be clearer about the way she talks to me. I want to be with someone who tells the truth.”  Julia, a diminutive woman who was dressed smartly, looked saddened and began to withdraw.  “How do you argue against that?” she said softly. “This is the kind of stuff I hear all the time at home. I’m not a liar and I do tell the truth. But, I can’t argue against that.”
Julia sank further into her corner of the couch, with Brian seemingly being unaware of his intense pressure and exacting personality. In fact, he continued his case-building.
“I can’t believe you (referring to me) can argue against what I’m saying,” Brian continued. “I hold her to the truth. If I’m wrong, I’ll admit it. But, I want her to admit it when she is wrong.”  I looked over at my co-therapist with exasperation. Brian was similar to others I’ve counselled who seem uninterested in merely making a point – they must ‘win at any cost’. They are not content to share a point of view – they must pummel their opponent (mate) into submission. I felt saddened as I watched Mary become more and more distant and closed.
“Folks,” I said. “I want to talk about what I’m seeing in your relationship. Specifically, Brian I want to talk about what I’m seeing in your personality. Would you be open to hearing that?”  “Of course,” he said, seemingly unaware of the magnitude of my concerns or the impact he had on others. I proceeded to share some insights I’ve gained about ‘truth-tellers’.
1. Truth-telling is not necessarily the virtue some make it out to be
Scripture implores us to speak the truth in love. The Apostle Paul says, “Speaking the truth in love, we will grow to become in every respect the mature Body of Him Who is the Head, that is, Christ” Eph 4:15.
Truth-telling requires that we speak from a motive of love – wanting the very best for another – and not from a motive of ‘proving my point.’ We cannot desire to ‘win’ or ‘get even.’ Motive is so all-important. Watching our mate’s reaction to our sharing will often reveal the impact of our ‘truth-telling’.
Solomon, the wisest man in the world, had this to say about the tongue: “The tongue has the power of life and death. Those who love it will eat its fruit” Prov 18:21. This clearly says that if we plant positive seeds with healthy, loving talk, we will reap its fruit. If we plant weeds of hurtful talk, we will reap that fruit. The truth can certainly be a vehicle to hurt.

3. Ask that your boundaries (not to engage in argumentation) be honoured
Make a clear, bold request that they not continue to push their point of view. Acknowledge that you heard it and honour it, but that you don’t wish to argue about it. Reassure them that you heard and value what they are saying, but don’t wish to pursue it.

4. Ask that your point of view be validated
While this is likely to be difficult, seek validation for your perspective. Seek to be honoured and respected for how you see a particular situation. If they are unable or unwilling to do so, gently stop that line of conversation. Agree to disagree and further agree not to engage in that particular topic again.
5. If this pattern is damaging to the relationship, ask for professional counselling
Confront your mate about the destructive impact of arguing. Point out your wish to have professional involvement to end power struggles. Insist on change in the relationship. 

David Hawkins is the director of The Marriage Recovery Centre and has been helping couples in crisis restore and revitalised their relationships for more than 30 years. For more info: www.marriagerecoverycenter.com