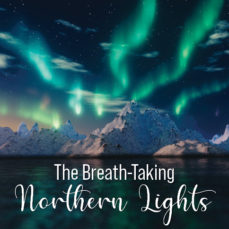 Northern lights, Aurora Borealis is a nature and light phenomena that you can see dancing over the sky on the northern regions of the hemisphere. It flickers and plays over the clear sky in the nights. The northern lights display themselves in an east-west direction, stretching upward 1000 km and appearing as fluttering curtains, wispy haloes, rotating pinwheels, or heavenly pillars that dance across the sky. They show themselves most often in shades of green, but can appear equally impressive in yellows, pinks, dark reds, and various blues. The northern lights are as striking as a brilliant sunrise except they rise in the wrong direction.

The northern lights are mentioned in the Bible in the book of Ezekiel in the Old Testament. In the 2600 years old description it says, “I looked, and I saw a windstorm coming out of the north–an immense cloud with flashing lightning and surrounded by brilliant light…”